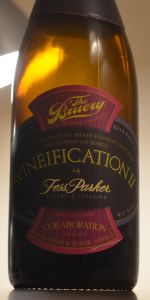 Notes: In this second rendition of Wineification, the Rues and Parkers continue to vanquish the boundaries between wine and beer. Again they have combined their brains and brawn on a blend of juicy Rodney's Vineyard Petite Sirah grapes with The Bruery's imperial stout, then aged this wine/beer hybrid in French Oak barrels. The flavor profile is remarkable. Notes of black cherry, vanilla, cinnamon, oak, aged balsamic, port wine and a sherry-like oxidation from the barrels. This beer is like nothing that you have ever tried before...besides, perhaps, Wineification I.
View: Beers | Place Reviews
Reviews: 21 | Ratings: 165 | Log in to view all ratings and sort
Reviews by UCLABrewN84:

Thanks to mrbubbler for sharing this one at Retsinis' tasting.

Pours an opaque super dark reddish-purple with a foamy reddish-white head that settles to wisps of film on top of the beer. Tiny dots of lace form around the glass on the drink down. Smell is of roasted malt, red wine, port wine, wood, and slight cocoa aromas. Taste is much the same with red wine, port wine, caramel, and cocoa flavors on the finish. There is a mild amount of wood bitterness on the palate with each sip. This beer has a lower level of carbonation with a slightly crisp and medium bodied mouthfeel. Overall, this is a very good beer with tasty wine forward characteristics that definitely take precedence in this beer.

A: This wine-stout hybrid pours not unlike a deep red wine. It is not quite black like its base beer but rather it takes on a deep, purple hue, reminiscent of dusk after a day of storms has finally cleared away. The scant finger of head also showcases purple tinges, appearing the color of a blueberry muffin before disappearing quickly and completely. Lacing is spotty at best, but at 13.7% ABV, this is unsurprising. Alcohol legs are prominent. The lack of head and lacing is fitting for a wine hybrid. Still, it would be nice to have a little more head and lacing, even in a hefty, barrel-aged beer like this one. 4.5/5

A: it is difficult to determine which element of the beer is most prominent, as both Black Tuesday and he Syrah grapes (not to mention the wine barrel) are present in spades. They do not fight, however; it is more of an intimate discussion between two perfectly complimentary components. There are the classic BT notes of caramel, toffee, dark fruits, tobacco, molasses, smoke, and chocolate, of course. Seamlessly, the wine shows up with black currants, blackberries, cherry, leather, spice box, cedar, rich grape jelly, almond, and plenty of oak. It is subtle, intense, refined, and classy. The wine does end up winning our eventually, making this taste perhaps a little too much like wine and not enough like beer. Fantastic, sexy, and alluring. 4.75/5

T: If possible, the taste is shifted even more toward wine. Given a blind tasting, many would probably peg this as a wine alone, as the imperial stout characteristics are quite subdued. Slightly tart berries greet the tongue up front, raspberry and blackberry, with tobacco, currants, cherry, raisin, almond, and spicy oak all following up. Black Tuesday bleeds through with toffee sweetness, rich cigar smoke, caramel, plenty of dark fruits, and gives an impression of sweetness to the otherwise quite dry profile. Dark chocolate is also present, giving the overall impression of a chocolate-covered, candied black currant. Many drinkers will wonder where the beer is, but it is still wonderful overall. 4.5/5

M: Here again, it feels more like wine than beer. The carbonation is so low that it could be mistaken for typical wine acidity, and the body is medium light yet oily (though not in a bad way) and with a slight stickiness that lingers. Alcohol warmth is moderate but not oppressive. The finish is mostly dry and very pleasant, but it is a little thin and a little too wine-y 4.25/5

O: So here is where my personal bias for this sub-substyle will be perfectly clear: despite not giving it glowing remarks above (which were necessary since even as a wine-influenced stout, it should exhibit a little bit more stout character), I love this beer. Wine barrel-aged imperial stouts are one of my favorite things in beer, and this one toes (and even steps over) the line better than any before it (save MAYBE Goose Island Napa County Stout). This is totally worth seeking out of you are at all interested in wine, as it drinks much more like a very rich red than Black Tuesday. The most remarkable thing is how not cloying it is (in contrast with the base beer). Leave it to the Bruery to pull off a beer of this off the deep end. Pair with the refined, genre-bending masterpiece "California" by Mr. Bungle. 5/5

Either someone tricked us or this beer was horrible.
It tasted like someone literally poured half glass of bt and half glass of petite sirah into my glass. Im an RS member and love bruery beers...... not this one!

I loved the first Wineification and I don't think I've had another beer quite like it. This is more of a comparison to last year's than a strict review of this year's. The wine used for the base of this beer has changed since last year from Late Harvest Syrah to Petite Syrah. With the late harvest being more Port-esque in quality, and from what I can tell either a higher ratio of wine to beer/longer time in wine barrels/maybe both, this version is, IMO, easier to drink but less complex than last year's. There is more carbonation up front, less BT flavor, and this ends up tasting similar to a very good chilled dolcetto-style slightly sparkling red wine. As it warms, it becomes more and more like the red wine at its base, to the point that once the beer got near room temperature I don't know if I would be able to distinguish it from a heavier red wine blend.

Again, there is not really anything out there that comes close to this beer in terms of the flavor profile. The play of the bourbon stout and the red wine is an inspired combo. I was the only one of the people I talked to who preferred last year's version to this year's, but I love port and anything that tastes like it. I will be very interested to see how this ages as I think the carbonation could calm down and the BT could come out a little more.

Very nice Petite Syrah grape notes, which happens to be my top 3 grape varietal. I'm a lover of fine red wines and Black Tuesday has a special place in my heart. This is a very enjoyable marriage between the two. The BT doesn't dominate, which makes this variation unique and preferable. Those that do not like wine will most likely not enjoy this.

A - Poured into a standard tulip a nice ruby mud light head but really phenomenal legs.

O -Overall this was a rather solid black Tuesday treatment. Interesting wine notes but sadly sour.

I absolutely thought this beer was the bees knees. It's unlike any beer I've ever had. And to be honest, for some that is not a good thing. My wife hated it and she loves Black Tuesday. Me.. I couldn't stop loving this beast. Unreal. It's a red wine fusion stout, no doubt about it. Just everything that I love about red wine and stouts.