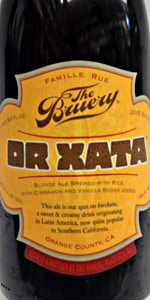 Notes: Horchata is a traditional, sweet, milky drink originating in Spain and Latin America that has become quite popular in Southern California, particularly with Mexican cuisine. Our take on the traditionally non-alcoholic drink is a blonde ale brewed with a heavy dosing of rice, cinnamon and fresh vanilla beans along with lactose for a little extra creamy character. If you didn’t know better, you’d think it was carbonated horchata. The flavor is hard to describe, but for those who know it, you know you love it.
View: Beers | Place Reviews
Reviews: 170 | Ratings: 957 | Log in to view all ratings and sort
Reviews by thebeers:

Clear straw yellow, with a big, white pilsner-type head and lots of bubbles. Malt-forward aroma, at first, with a corn-tinted, oatmeal mush smell up front, along with hints of vanilla and cinnamon. Upon sipping there's -- wow -- an unexpectedly-intense cinnamon flavor that still manages to be light-tasting, along with plenty of vanilla and corn in the backend. Pretty light bodied and smooth, all things considered, with just a little spicy prickliness. Definitely one of the zanier beers I've tried. Over the top, but in a refined way.

Smell: When just pulled out of the refrigerator it has a very noticeable cinnamon essence followed by vanilla. As it warms you start to sense more vanilla as the cinnamon tones itself down.

Taste: Recommended serving temperature is 45F (7C). I let it warm up to around 54-55F and I found it much more enjoyable. The vanilla is more pronounced and the cinnamon is toned back from when it is colder. I found it at a lower temperature to be more of an off flavoring that was leaving the aftertaste undesirable.

Feel: Very creamy on the palate, with a sense of warming from the cinnamon followed by a nice undertone of vanilla.

This was my first review on this site, and I hope this was helpful to the people that read it. Cheers!

T: Hops, malts, LOTS of cinnamon, vanilla. Amazing! This is how a good lager SHOULD taste :)

O: Happily surprised by this one. I didn't know what to expect but definitely not this! This is an amazing beer.

Pours a clear, golden amber coloration with a medium, fluffy head. Smell is dominated by sweet'ish, biscuity, grainy malt and cinnamon and vanilla, with the cinnamon standing out particularly. Taste follows the nose, with sweet'ish biscuity, grainy and slightly caramelly malts and cinnamon and vanilla absolutely dominating and very little hops coming through, although there is a mild estery yeast presence to this as well, with hints of apple and clove/nutmeg. Finishes semi-dry, with a light sweetness and some cinnamon and vanilla lingering in the aftertaste. Soft mouthfeel with a medium body and carbonation.

I never had Horchata, but this kinda reminds me of cinnamon rice pudding, especially the aroma, which goes in kind of a similar direction, I think. Anyway, while this is a rather unusual brew, there definitely is a great balance of sweetness and spicyness going on here, which lends a sweet character to this that never becomes cloying through, even finishing somewhat semi-dry. I'm not really a huge fan of cinnamon-heavy beers and this generally isn't particularly to my taste, but I still enjoyed it well enough due to its uniqueness and good balance.

Picked up from Woodland Hills, CA.

Look: pours a golden yellow, with a small head of white foam.
Smell: Honestly difficult to derive anything different than what was added to this blonde! Strong aromas of rice and cinnamon.
Taste: again getting rice and cinnamon, but clearly getting those milky notes as well. Really nice balance, amazing how close they came to a cold glass of Horchata.
Feel: nice level of carbonation, slightly sticky with a slightly heavier mouthfeel.

Poured into Bruery snifter. Appearance is clear gold with minimal head and no lacing. The nose is very sweet. Notes of brown sugar, cinnamon, and caramel come first followed by heavy vanilla character. Taste is super sweet up front with notes of burnt sugar, mild cinnamon, sweet cream, and caramel. The flavor is reminiscent of horchata, but I'd say this beer comes off a few degrees more sweet than most horchatas. Mouthfeel is bordering on syrupy with moderate carbonation. Overall, the Bruery did a good job of translating the delicious Mexican beverage into beer form. The resulting beer is very sweet and serves as more of a dessert drink than anything else.

It is exactly as billed: vanilla cinnamon analogue of horchata.

Tasty with a strange sort of Latin flavor profile that we don't get much of in the northeast..

Worth a try in warm weather with spicy food IF you like vanilla. If not, run away. I too will not finish this tonight, as the sweetness is not exactly what I'm looking for in a beer. The wife loves it. I have no qualms about finishing the rest tomorrow, I'm just in the mood for hops I guess.

Kudos Bruery from your biggest fan in Upstate NY. My shipment arrives Thursday with Jardinier to try. Maybe I will wait until it stops snowing.

Diversity is a wonderful thing

A little on the sweeter side but very creamy and tasty.

Bought a 750mL bottle from Whole Foods in Arlington, VA. 2016 Edition. Poured into tulip glasses and paired with pasta primavera.

Overall: Really impressive, I didn't know it was possible to make beer taste like this! Sweet and delightful.

A- Pours a translucent brownish, orange gold with about a half finger's white head that recedes to a thin layer leaving behind some spotty lacing. Fairly carbonated with a lot of small carbonation bubbles rising fairly fast.

S- Tons of cinnamon, a decent amount of vanilla bean that conflicts with the blonde ale aroma to create a weird slightly off-putting aroma, the rice doesn't contribute too much to the aroma. Fairly aromatic, but not a huge fan.

T- Creamy rice pudding topped with cinnamon, vanilla beans add a nice flavor balancing with the rice qualities, blonde ale aspect with a hint of bitterness hidden on the background and comes out a bit on the finish. This beer tastes extremely unique and quite tasty especially if you like rice pudding (which I definitely do). Overall the taste makes up for what the aroma is definitely lacking.

O- I'm not a huge fan of blonde ales however Or Xata does not taste anything like a typical blonde ale and is extremely unique nailing what they are going for. The aroma was way too sweet and unbalanced with too much cinnamon and sweet vanilla bean. However the taste (in my opinion) was as spot on as it could be with nice vanilla bean qualities balanced with a pinch of cinnamon and rice pudding. Overall if you love rice pudding and unique beers I'd definitely check this beer out, if you don't I'd probably stay away.

had this awhile back on tap at Uno, but did not rate it. Tonight it is can to snifter at home as a pairing with s'mores.