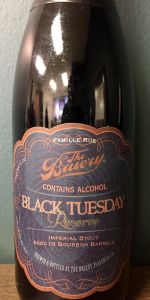 I believe this was a 2018 bottle (4 years aged). Leaned towards a more licorice flavor. Didn’t pick up much bourbon. Solid beer/liquor drink (20% it’s hard to still consider this a beer). My guess is that perhaps it’s a little better if it were fresher, maybe 6-12mo age which is generally where I like my BA stouts.

2015 vintage
Look: very dark. Some cola highlights when held to light. Sparse head of course.
Smell: mellow Black Tuesday underneath. Vanilla, bourbon fudge.
Taste: like the nose. Unbelievably mellow for such a monster.

Review #8000, 2015 vintage. This will be a very emotional review. Normally for big milestones like this, rudzud would have some crazy beer to share, but that can't happen now. Instead this was one from our share box that we got from Hoarders, saving for a special day. He might not be here physically to share it with me, but he's here in spirit.

Nose brings lots of barrel and bourbon, lots of vanilla oak, a bit buttery oak, fresh bourbon barrel juice, a bit like my nose in a Glencairn glass with some decent bourbon, lots of dark malts under that, some roast and coffee, no char, loads of cocoa, dark chocolate, a little nougat candy bar, fudge, a bit of a chocolate syrup as well, a little alcohol

Taste super rich heavy malts and barrel, dark chocolate, raw cocoa, chocolate syrupy again, a bit of a candy bar with light nougat and caramel notes, some roast and coffee as well, more like a coffee syrup, barrel brings lots of vanilla again and fresh bourbon barrel juice, a little generic whiskey character but some raw sweet bourbon as well, getting fudgey in the middle, some toasted oak character and layers of vanilla, a touch of baking spice, med lighter bitterness mostly from the roasted malts, some hot alcohol not quite fusel but almost there, finishes sticky and coats the mouth, never really goes away, lingering cocoa, fudge, vanilla and generic whiskey

Overall quite nice, there have been better Bruery beers, but for a Black Tuesday variant adding the extra bourbon and barrel was nice, although I think it has dropped a bit from what it probably was fresh, but alcohol didn't destroy either as the age probably helped there.

I swear I heard a pop sound from my glass while it was resting and I was typing. Matt must have taken his sip, and I hope he enjoyed it. Miss the great bottle shares and fun times. This was just one more milestone in my reviews. I know rudzud always joked about how he would never catch me in reviews, and I guess he was right. I'll keep drinking beers, but I'll always have that hole that will never be filled. Cheers Matt!

Very good head production, considering the sky high ABV and double barrel aging. Quickly fades, as expected, leaving behind only a thin ring of foam around the edge. Body is surprisingly clear and cola-colored.

Boozy nose - whoda thunkit? The smell of bourbon, port, and brown sugar wafts over you from the pour itself. Up close it's similar but stronger: red grape, molasses, chocolate, brown sugar, oak, bourbon, vanilla, toffee, honeycomb.

Strong, sweet, and boozy on the palate, with an alcoholic burn that grows and grows. Very slow sipper. Lasting heat in the throat and chest.