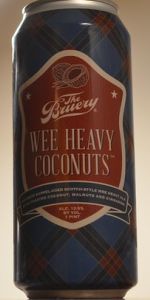 Pour was brown/amber color, 1/3" off white/beige head. Aroma lacked the peat/earth combo of most beers in this style, instead, came at you with bourbon, coconut, nutmeg, cinnamon and maybe some other American spice rack accoutrements.

Taste was nice and smooth, mouth feel not being hot was nice. Carbonation was better than expected, sometimes brewer's go all in on having a flat wee heavy. Vanilla here where it wasn't in the nose. Bourbon melded well with coconut. Kind of makes proprietors chasing seem silly. Impressed on the softness, its a fun beer to sip on if you like coconut and bourbon. Amount of coconut is high, making the head retention even more impressive. Smooth toffee notes throughout.

For whatever reason, the flight info sheet from the Bruery said this was 13.5% instead of the 12.5% listed here and on the can. Seems just as much old ale/English barleywine if not more than wee heavy, but perhaps that is why I liked it so!

A bright off white head that is creamy and foamy with okay retention. The color of the beer is medium brown color with some mahogany hues. The clarity of the beer is opaque.

Had a taster of this on a recent trip to The Bruery, actually on an awesome brewery tour. Had already planned on getting it as one of my tasters, but it was so damn good. Happy to have the chance (thanks to Chris) to pick up a growler of it for $30. The next day (today) I was wondering why I needed two liters of this and I hoped it was as good as I remembered. Here’s to a taste of heaven.

Tasted pretty much as good as the nose, getting that mix of coconut and cinnamon. Also toffee, caramel, nutmeg, brown sugar, light molasses, milk chocolate and lightly roasted scotch malts. Could not taste the 13.5 pct. ABV. Just fantastic. (Overall - 4.75)

This was basically one of the best beers I ever had. So flavorful and tasty, just awesome. (Overall - 4.75)