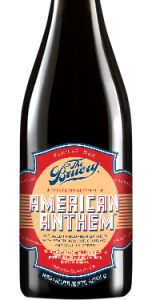 Notes: We added peaches and apricots to our barrel-aged ale, dusted the dessert-style beer with cinnamon and added vanilla to impart sweet, creamy ripples.
View: Beers | Place Reviews
Reviews: 14 | Ratings: 34 | Log in to view all ratings and sort

Oooh, I think this might have been my favorite Bruery beer I tried for the first time in 2019. I know I went right ahead and ordered another bottle right after I consumed the first one.

Pours one of those auburn/amber colors, the mix of dark orange and light brown, 3/4" beige head. The aroma, damn they nailed this, everything the commercial tug job speaks of checks out, the bourbon, peach, lesser apricot, vanilla, graham cracker crumbs, cinnamon, "the gang's all here".

Hot damn, this shit is so good. Wonderful interplay between all the aforementioned ingredients. Pretty rare when something this strong makes you desire for more. Even though we split this, I believe I could easily sip all 25.7 ounces over the course of an hour or two solo. How in the hell did the mouth feel come across light, yet flavorful, yet almost no alcohol heat inhibiting the rate of consumption.

I really dug Pie Thief and Thee Cobbler a lot over Thanksgiving, but holy moly, this is the real deal. Will buy minimum 1 bottle every vintage, but prolly more. Its exactly what they say it is.

Interesting but a bit too sweet for my taste. I prefer bourbon barrel aged beers that are darker, such as stouts and porters, and without sugar added.

Appearance: Cloudy medium-brown in color with a medium sized beige head that dissipated quickly. Not much to look at.

Smell: Moderate Bourbon , peaches/apricots, cinnamon, and faint toffee notes. There is a definite peach cobbler aroma to this one.

Taste: Bourbon, cinnamon, peaches/apricots and mild brown sugar notes. All of the flavor notes are nicely balanced and produce a peach cobbler dessert taste profile. it seems as though this was the intent and the Bruery succeeded in achieving the desired taste profile. The alcohol presence is very restrained for the listed ABV.

Mouth-feel: Medium-bodied with a moderate amount of carbonation.

Overall: This was a tasty Strong Ale. The mimicking of a peach cobbler/pie was definitely achieved here without the taste profile elements becoming overbearing.

Poured from fridge temp. Pours a nice dark murky orange with lots of tan head. The head quickly disappears leaving a gorgeous beer. Nose is cinnamon, which is completely dominant. I don't get much peach or apricot on the nose, but nuts come through. Some vanilla and a touch of apricot come through after a few minutes. Taste is really interesting. The fruit really comes through here, along with the classic Bruery flavors. Peaches are definitely there, but I am also getting a good amount of mango and a touch of orange. Bourbon, Christmas spice, nuts, bread, and some vanilla come through as well. This is just a nice beer to sip in the winter. Mouthfeel is thick and full-bodied.

750ml bottle poured into a tulip.

Overall: Its a bit like Apricot juice with cinnamon. Really should be reclassifued as a fruit beer. I enjoyed it, but also glad I only bought one bottle.

Muddy brown and quite ugly, this looks like gumbo roux in a glass. A fizzy tall khaki foam quickly and audibly dies off to nothing, leaving an apple cider looking drink. So far we're off to an All-American start!

Aroma seems imposingly threatening, primarily of bourbon, with a hint of apple pie in the background. So...moar 'Merica! Hey, they're on theme so far.

Taste is more tolerable and even enjoyable than the nose suggests, with peach cobbler and dusty cinnamon, fading into peppery bourbon and rum cake. This truly is all the American grandma's kitchen delights in beer form, with of a touch of Caribbean.

The medium body has a crisp but fine tingly carbonation and comes to a dry finish assisted by that drying cinnamon bark character. A touch of gooey raisin bread and even a hint of chocolate chip come out on the exhale.

Poured from the bottle into a Bruery tulip glass. 2019 Vintage.

Murky and kind of swampy brown body color appearance in the glass. Looks like there's this almost kind of things in suspension lurking in the glass.. The head color is a little over two fingers, and classic khaki brown like color. It snaps quite a bit out of the bottle with pop like carbonation, and dissolves a bit quickly with a very fine collar that dissolves to next to nothing.

The aroma is absolutely exquisite. This literally smells like baked peach/apple cobbler. Excellent woody tones and big stone fruity aromas, mixed with a soft vanilla, and a big cinnamon rush. Some of the whisky tones are a bit understated, but everything on the bottle is as described and to perfection. This is literally American Apple Pie, what could be more classic!

Palate is quite a surprise. There's at first a real nice peach tartness, then an excellent bakery and flakey pie crust mixed in. Real excellent touches of soft cinnamon and vanilla with a real sense of baked apple as well. The mouthfeel is extremely light but rich and makes for surprisingly easy drinking at this high abv. I am kind of surprised how light it is with such and ABV that I have to score it a little high for that alone.

Such a very strange beer! It doesn't look or smell amazing; it's a touch murky, an odd brown color, and definitely implies a ton of cinnamon and sugar.

On the palate, the peaches and cinnamon combine to give a cobbler-like taste, and coupled with the high ABV, a sweet, boozy, and very pleasant experience. It's difficult to describe, almost a combination of apple pie and peach cobbler soaked in bourbon. The apricot and vanilla add to the overall profile without particularly standing out.

Poured into a large wine glass, the American Anthem shows a muddled brown in color with a light cap and some caramel highlights. Cap dissipates quickly to a minor surface ring.

Aroma is rather thin, with some faint watered down apricot notes the only signal at first. No sign of a barrel, yet no sign of 13% either. Warming brings out a bit of peach vs apricot but remains faint and underwhelming.

Taste is moderate and muddled with a sweet candied sense and a notable cinnamon presence. Sweet muddled fruit pie character on the finish with a flash of ethanol picked up somewhere along the line. Bit of the barrel creeps in to the picture as the beer warms though it remains in the background. Offers a decent feel and finish for what it is and was designed to be yet still misses the mark a bit for me. A fairly low carbonation keeps the spices at bay and yields a rather lackluster aroma which sets the tone for the experience.

this is one of the very best beers i have ever had, count on these guys to deliver that, they almost always do. the base is a huge strong ale in a barleywine or old ale style, sort of the generic boozy thick bourbon barrel aged base these guys have become known for with their anniversary series among others. the twist here though, is all that is added into it, peaches, apricots, cinnamon, and vanilla, giving it an awesome hearty warming baked late summer to early fall complexion, as interesting and layered and flavorful as beer gets, the synergies here are everywhere, and this really is something quite unique and special. the aroma is crazy, a nice cobbler out of the oven, a warming baked dessert, not overly sweet, but the malt sort of acts like the crust or the crumb topping, with all sorts of brown sugar notes and buttery richness, while the peaches and apricots have a cooked or almost grilled complexion, sweet and fleshy and just dynamite with the sprinkle of cinnamon and the vanilla bean character. not overly sugary, but it really opens up in a rush of carbonation when it hits the palate, the fruit goes amazingly well with the bourbon, there is a killer relationship right there that is present from start to finish. the cinnamon isnt too much, but it comes on right in the climax with a bit of the alcohol, a neat autumnal flavor and feel, and then finally the vanilla with the oak and the heavy concentrated grain, rich and fancy. the flavors sort of keep on coming in different combinations, and it never really stops, i taste this newly for a good couple of minutes after the swallow, its endless and its incredible. rarely have i had a desserty beer like this and been surprised. such things are predictable after a few of them, and so i was blown away by how different and evolved this was. easily a beer of the year candidate for me this year, probably wins that title when all is said and done. this absolutely blew me away. the peach and the whiskey, oh my god. its perfection!

A: Poured into a snifter to a ruddy brown topped by a dense finger of light tan head which fades slowly to a collar around the edge of the glass with minimal lacing
S: Smells of cinnamon, peaches, vanilla, and some toasted bread. It smells like an amazing peach cobbler
T: Taste is peaches, apricots, vanilla, a nice backbone of cinnamon, some delicious oak notes and some sugary sweetness with a hint of caramel. Swallow is more peaches and apricots, cinnamon and vanilla with some oak and bourbon.
M: This beer is pretty full in body and slightly syrupy. Carbonation is low but it is adequate while the ABV gives this one a drying finish despite the sweetness on the palate.
O: This beer rocks the house. It has some amazing flavors and complexity and is an absolute joy to drink. It really does taste like a cobbler. This one is definitely worth trying if you can find it.

32oz crowler poured into a snifter

S- peach and cinnamon up front on the nose, along with brown sugar, stewed apples, vanilla cream, cinnamon toast and undertones of bourbon barrel

T- sweet and malty up front with plenty of cinnamon, followed by notes of stewed peaches, brown sugar crumble and sweet vanilla. Light barrel notes adds some bourbon and oak, lingers of cinnamon and brown sugar

Can really smell the peaches and cinnamon in this one. Deceptively strong and hides it's alcohol behind great flavor and smooth taste. Didn't get a ton of the bourbon barrel from this but still a good experimental from the Bruery

The beer pours a nice off-white head that dissipates at a moderate pace. The beer itself is a decent brown color with a slight orange and reddish hues underneath.

The smell and taste are both pretty good. Both have a good sugary peach cobbler note with a slight hint of cinnamon and a sugary vanilla note really makes it appear to be as a liquefied peach cobbler. There are some light tart apricot notes that add a nice contrast to it. The bourbon note is there but it's almost unnoticeable.

The feel is good. The body is medium heavy with a good biting carbonation but it's still pretty smooth.

Overall, this is a great strong ale and definitely worth getting.

American Anthem from The Bruery
Beer rating: 89 out of 100 with 34 ratings