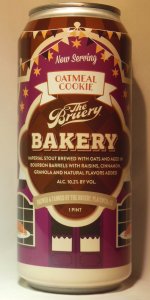 Notes: Sink your teeth into this boldy decadent, freshly-baked imperial stout. This barrel-aged treat was brewed with old-fashioned oats and packed full of cinnamon, raisins, and granola for the perfect balance of sweetness, spice, and chocolatey richness, reminiscent of oatmeal cookies hot off the pan.
View: Beers | Place Reviews
Reviews: 8 | Ratings: 23 | Log in to view all ratings and sort

Problem is, I don’t like oatmeal. At least raw. It drives me away like a cross to a vamp. The smell is appallingly vomitous. This? The Bruery hit the bullseye in execution. Very good brew.

This is an unfair review, and I apologize for that. The name gives fair warning, but it is just too sweet for my taste. Don't get me wrong, this is not a bad beer by any stretch, just not my favorite style. If you enjoy a sweeter style or pastry stout the aggregated scores suggest you will really enjoy this.

Poured into a snifter glass, dark brown. Good mouthfeel with moderate viscosity. I get a fair amount of cinnamon and some bitterness from the raisins. The barrel aging and high alcohol content are noticeable but not overwhelming. Overall a tasty treat, one i’d probably try again.

Poured moderately hard from a tall can into a snifter glass, forming a few fingers of brown head that slowly faded. Deep black/brow color. Subtle smell of oatmeal cookie and some cinnamon. Taste is definitely some oatmeal cookie and cinnamon, fairly sweet too. Not quite too sweet, but close. Probably the best tasting oatmeal cookie-like stout. Medium bodied with moderate carbonation, a bit oily but a nice feel.

Appearance: The beer has a medium-short dense head with a khaki color. It has decent retention but not much lacing. The body is black.

Aroma: It smells like alcohol and it has a light bit of cinnamon. There is an acrid aroma of burnt wood. At first it smells pretty unappealing with this sickly acidic aroma but as it sits in the glass for a little bit the cinnamon takes over the airspace and it smells a little better, pushing that odd aroma out of the way. As the beer warms up a bit the aroma stays mostly the same. It's pretty average for a beer made with what appears to be cinnamon.

Mouthfeel: The beer is very thick and smooth with a full body. It is worth pointing out that while the alcohol is present it does an excellent job of blending it into the background, much like a liqueur.

Overall: The can states that this is an "IMPERIAL STOUT BREWED WITH OATS AND AGED IN BOURBON BARRELS WITH RAISINS, CINNAMON, GRANOLA AND NATURAL FLAVORS ADDED." The cinnamon came through and it is possible that the oats came through a bit, but the bourbon and barrel characters were lost. The can also states that this is an "ALC. 10.2% BY VOL." beer and it does a great job of reigning in that alcohol content when it comes to the flavor. It is still present but it melds with the beer. The can states that this is called "OATMEAL COOKIE" and it does have that quality, but it could just as easily be called a cinnamon roll beer. It's worth pointing out that it was not called an oatmeal raisin cookie, even though raisins were included as an ingredient, because while the alcohol has a bit of fruity character to it, it doesn't taste quite like raisins. As a whole this is a very enjoyable beer. It would work great as a Winter Warmer or a holiday beer. I would recommend it to people who enjoy cinnamon or like dessert-style beers. I could drink it again on occasion, but I would probably buy it closer to Christmas rather than in the Spring.

Poured into a Fremont small snifter. Pours a very dark mahogany brown, appearing opaque black in the glass with a quarter finger brown head with great retention and light lacing. Aroma of dark toasted malt, cinnamon, mild cocoa and raisin; kind of like a Mexican chocolate style stout, really. Flavor is semi-sweet, dark toasted malt, raisins, cinnamon, sweetened oatmeal. Lingering cookie finish that really does taste like an oatmeal cookie, but with a slight tartness (from the "raisins"). Medium bodied with light creaminess. As with the other stouts in this series, they really did a great job with the accuracy of the cookie taste. As a matter of fact, I kept looking at the glass, because the malt taste is more like the light flavor of oatmeal and raisins than the typical dark malt expected from the opaque near black color. This is the other side of the coin from those odd stouts that are light amber in color, but taste like a dark malt stout (but look like they should taste like a cookie). Anyway, mission accomplished. An interesting dessert stout that tastes remarkably like an oatmeal raisin cookie. The mild tartness is not my style for stouts, but it works in this context.

On the nose its sweet, with cinnamon and raisins. Hints of vanilla. The taste is just over-the-top pasty stout! You can easily pick out the oats/grain flavors, the raisin flavors, and the cinnamon as well. It's also quite strong at 10.4% so the cinnamon-y finish combines with the high alcohol to leave a slightly too-strong punch. The finish lingers awhile... the scent of cinnamon and raisins will stick with you.

This is a bit of a crazy beer. Excellent experience but not an easy drink!

Pours a dark brown with a finger and a half of creamy, medium brown head. Tightly packed bubbles slight lacing.

Nose is cinnamon, dark fruit/raisin, mild bourbon sweetness, granola/oat, some booze. This captures an oatmeal raisin cookie quite perfectly. Something the Bruery just does so well is really nailing these adjunct based dessert stouts.

Taste follows the nose pretty closely. Taste is much stronger than the nose. Cinnamon, raisin, oat, more bourbon than the nose. There is a nice slight bittering quality on the back end that keeps this from being too sweet. Much like an oatmeal raisin cookie, that slightly tart raisin flavor persists through to the end. Very nice.

Mouthfeel is fullbodied but not heavy or too dense. A little sticky and cloying. Not too oily. Slightly above mild carbonation. A lively feeling for what you would normally suspect from a stout like this.

Overall this is a great brew from The Bruery. Having had, but not reviewed, two oatmeal raisin brews before this, Cigar City's and Dragon Milk's, I'd have to say that this one is probably the most accurate to the real thing. Well balanced, not too sweet, and just nails the flavor profile. Well done.


Bakery: Oatmeal Cookie from The Bruery
Beer rating: 92 out of 100 with 23 ratings