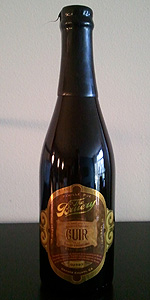 Notes: Cuir is our third anniversary ale. It is the same recipe as Papier, but again created using the Solera method. Each year we will continue to blend old barrels of anniversary ale with a new batch of the same beer, adding an additional layer of complexity that will grow over time as we continue to age and blend with each anniversary, creating an older average age to the ale.
View: More Beers | Place Reviews
Recent ratings and reviews. | Log in to view more ratings + sorting options.
Ratings by jegross2:

Reviewing the Cuir from The Bruery. I reviewed the 100% barred aged version of this at the end of last year.
Score: 79

2011 vintage bottle with bottle number 16598. Served in a wine glass and enjoyed on 03/31/12 with my good friends Adam Kaplan and Bryan Hernandez in the elegant W Hotel in River North.

Appearance: Pours a deep and hazy amber color that fades from a deep mahogany at the top to a reddish amber color at the bottom. Two fingers of creamy tan head at pour settles to a decently thick later. Amazing lacing, superior retention. 4.5/5

Smell: Barnyard funkiness and caramel. There's a sweet grape flavor that Hernandez described as "Sherry-like." I am not a wine connoisseur, but he is, so I'll take his word for it. There is barley malt, dried apricot and a light blackberry fruitiness as well. I detect a hint of rose pedal, but no one else seems to agree. There is a light alcohol heat in the nose, and it grows as the beer approaches room temperature. For all the complex nuance to the nose, though, you really have to fight through the funkiness in the aroma to detect it. 3.5/5

Taste: Sweet caramel and funky malt throughout. The alcohol is decently hidden at first. The funk seems to subside a little as the beer layers, but as it warms it gets less balanced and more boozy. Bitter barley and banana yeast on the midpalate. Some dried fruit and apricot in addition to modest berry notes. The fortified wine/grape from the nose is in the flavor too. Bitter barley finish and linger with a warming effect on the palate. The funkiness is really detracting. 3/5

Mouthfeel: Medium bodied, medium carbonation. There is too much carbonation for how acidic and malty this beer is. Acidic finish. 2.5/5

Overall: Complex, but marred by a funkiness that overshadows the better qualities of this beer. It gets less balanced as it warms, and is too carbonated for how acidic and malty Cuir is. I do not like to throw the infected label around very often, but I did not see any other reviews that described the funkiness experienced with this beer. Maybe we just got a bad bottle. I have had the 100% Cuir before and it, in addition to tasting divine, tasted quite dissimilar to this (with a much heavier mouthfeel). I could not finish my glass once this beer hit room temperature.

Recommendation: This beer gets re-released every year, with a slightly different blend of base beers, with a new title. The 2012 version is called Fruet. I'd recommend waiting for a bottle of that, which will be easier to get, instead of seeking this one out.

Day 2 of "Raid Your Cellar During COVID-19 Quarantine." Last night it was a 15-year-old Brooklyn Monster Ale (barleywine), tonight it's a roughly 9-year-old Old Ale.

Consumed on 4/8/20. Cellar-aged for a couple years, but it's been in my beer fridge for quite some time.

A: Poured from the bottle into a tulip glass, the body is clear mahogany-amber when backlit, more chestnut brown when the light's removed. A 1-finger khaki-colored head rests on top, but dissipates quickly.

T: Follows the nose, with a caramel malt/toffee foundation followed by molasses, licorice, apple cider, and dried fruits - raisins and prunes, primarily. Touch of vanilla, oak and bourbon, but not a lot. The 14.5% ABV is noted in belly, but not on the palate at all. Age has likely mellowed this one.

M: A bit oily and slick - any carbonation that was there at birth has largely disappeared over the intervening years, notwithstanding that nice head I got on the pour.

O: This has aged well - a nice sipper that will warm your soul.

030620 Frothy tan head billows above the ruby-brown pour. Caramellic wafts lead to barrel notes and a pleasant earthiness.
The aroma develops as it warms as this brew has been cooped up since 2011.
Very smooth mouthfeel and tastes of caramel, raisin bread, fig, with light apple notes and a touch of clove. Thanks for the opportunity David and Doug!

Had on tap. An 8 year aged keg, let's go! Opaque and languid brown with only a skinny tan ring. So much toffee aroma, with booze, barley, fig, molasses, leather, bourbon, and brown sugar. Taste opens up into a syrupy, boozy and chewy body. This feel gives the flavors from the smell time to sit on the palate and play, luxurious and potent. The toffee, bourbon (even after all these years) and the dark fruit stand out the most. I miss the days when the bruery was killing it like this consistently

Poured from fridge temp in January of 2019. Pours dark brown with substantial head. Nose is heavy oxidation, dark fruits, and a bit of toffee. Not overly appealing. Taste is better than the nose. Nice notes of toffee, Belgian yeast, bread, nuts, dark fruit, brown sugar, vanilla, and oak. Mouthfeel is nice and creamy. Overall, this has held up well despite a not-so-nice nose.

A: Poured into a snifter to a deep brown which is nearly black topped by a finger and a half of dense light tan head which fades slowly to a collar around the edge of the glass
S: Smells of toffee, raisins, caramel, light fruitiness, and a hint of licorice
T: Taste is toffee and caramel with raisins and some licorice. Other spice notes come in at times as well. Nice fruitiness from the Bruery house yeast as well along with a slight vanilla. Swallow is more caramel and vanilla with a hint of oak along with some lingering dark fruits, raisins and spice.
M: This beer is big and slightly chewy in the mouth with soft carbonation that is adequate for the style. The beer has a drying finish which is to be expected for the style.
O: Overall this is a really nice beer with some great flavors and some very nice complexity. This one isn't showing the slightest hint of oxidation either which is very nice. These are definitely drinking very well and I still have one left. Lucky me.

Originally purchased for my 1,300th review on BA. It was not to be. This was pulled from "the cellar" of my local specialty beer shop. The third anniversary ale, brewed in 2011. Bottle # 05739 Black wax seal. Let's see how well it's aged in 6 years in the cellar.

A Very cloud and opaque brownish color with some red hues. Mocha foam cap is pretty thick and short but smooth and dense. recedes pretty fast. Only a thing ring is left.

The aroma has some oxidation hints..mainly wet cardboard. Then it's, smokey oak, old leather with spicy tones, herbal and earthy. The aroma is actually very complex. Mild chocolate and spices , toffee with wet earhy notes and heady, woody malt. Blackberries pop out later on.

75% new ale blended with 25% very old ale from Bourbon Barrels. The flavor is amped up in complexity! The malt layers is unreal. First, very sweet tones of maple syrup with tons of Bourbon Barrel boozy notes, smokey oak and vanilla, sugared dates, ovetly ripe dark fruits, boozy heat tingle, some sour tones from the hops and or yeast combo. Very "Sweet N Sour" overall, multiple flavor aspects derived just from the Bourbon Barrels, especially the oak and maple syrup. Earthy, herbal balance rides on in the finish with a slightly bitter, earthy ending. The malt flavor's just mutate and change in your mouth and as you swallow. Amazing depth of charecter.

The mouthfeel.....is actually very "alive" for an Old Ale and especially for a 6 year old! A decent bite, hot booze tingle but very full and heavy. Oily slick
Long and smooth and kinda dry in the finish.

Take your time with this one. The 14.5 % abv is no joke. A true sipper. The sweet and sour effect is very intense. You will find the overall complexity in all catagories to be a real challenge to experience. Only very mature audiences can attend this tasting!

A: Lots of toffee/caramel aroma with a light barrel presence.

A: Dark brown color, opaque, with a thin tan head that dissipates into the glass.

M: Full bodied with light carbonation. The alcoholic strength is noticeable, but quite smooth.

Popped open a 750-mL bottle I've been holding onto for god knows when. Poured into my Bruery snifter. Looks a muddy Amber color with some brownish off white head that quickly vanishes to some soapy bubbles. Bottle presentation was very nice with wax over standard bottle cap.

Smells of cinnamon, allspice, brown sugar and molasses. There's a hint of some bourbon in there with light oak. Smells a little boozy but I'm guessing it has certainly mellowed over the years.

Very sweet upfront with almost a syrupy or candied texture. Lots of brown sugar, sweet cherries, and molasses. A hint of bourbon & oak. Surprisingly smooth for 14.5% abv. Very full bodied & mellow although the booze does warm the throats after the 3rd or 4th sip. Sort of reminds me of cough medicine.

Was worried about drinking this bottle all to myself but the smoothness really makes it quite approachable. I wish it had less cough syrup flavor, maybe more bourbon or more hops to add a tad more bitterness? This beer seems to have aged well. I only wonder how it was fresh.

Caramel & brandy notes in the nose.

Served on draft at the Bruery Tasting Room as part of Orange County Beer Week. Really enjoyed this in the bottle over the years, but it seems to be past its prime; the pour I had exhibited all of the usual trademark flavors of The Bruery's anniversary ales, but it was heavily oxidized.

Taste was the first in the series to get good at hiding the alcohol unlike the previous two iterations. Toffee and caramel is this series hallmark, liquid cracker jacks with booze. Sweetness is perfect for helping the mouthfeel flow. Syrup and leather.

Complex and well integrated. Good beer, time to pop one of the 100% -bal ones soon.

Tastes raisony, toasty malt, cocoa, molasses and slight herbal character. Some oxidative notes pushing through adding great complexity and focus on the dryer side of the maltiness present.

This is full bodied and modestly carbonated. Great balance of booze, malt, herbal and oxidative qualities. This bottle is 5 years old at the time im opening it but it actually tastes older than that and im really digging it. (I assume this is the product of the solera method of blending/aging.)

Revisit 12 hours after opening for another 8oz pour:
Less carbonation which actually feels more fitting of this big beer giving it a richer, creamier feel. Papery oxidation initially that gives way to lots of fruit like raison/prunes and a seemingly completely masked alcohol inclusion. The aftertaste has a bit of fall foliage feel with herbal bitterness contrasting the caramelized sugars.