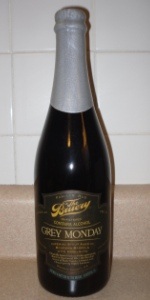 Notes: Grey Monday is a special version of our Black Tuesday imperial stout that has been aged on hazelnuts.
View: More Beers | Place Reviews
Recent ratings and reviews. | Log in to view more ratings + sorting options.
4.21 by boogerisu from Iowa on Mar 29, 2022

2018 Vintage
The beer pours very little head and the beer itself is a dark brown color with a bourbon like appearance.

The smell is good. It has a nice mix of a sweet alcohol note and sweet hazelnut.

The taste still has the hazelnut note but the chocolate is more forward and dominates the taste alongside the alcohol note.

The feel is good. It has a heavy body with very little carbonation and a slight burn at the end.

Overall, a good beer worth getting and drinking fresh instead of holding it for a while.

Woah. This is a huge beer. Hazelnuts on the nose. Chocolatey and nutty on the palate. The booze is there, but it works. Just don't have more than one!

Pours a very dark brown, or more so, it's black with brown shining through the edges. Its a blood-burgundy color with a clear transparency when direct sunlight pierces it. Head is a finger of khaki-caramel foam after a slow pour, but it fizzles out quickly. Aroma is raisins, toffee, molasses, caramel, chocolate and roasty, toasty, earthy, nutty and caramely malts. Heat is seeping through pretty heavy with a whollop of bourbon booze at the back. Flavor profile is raisins, figs, toffee, molasses, caramel, chocolate, molasses and syrup with hearty roasty, toasty, nutty, caramely and bready malts. It's thick, thick and thick. Drinking a boozy cookie. Bourbon adds heat that seems in and lingers long after the malts wash away. A touch of char adds a little grounding bitterness for the sugary initiation. Mouth feel is thick, sticky, velvety and chewy. Overall, thick and boozy with a lot of complexities. It's super rich and full, which is what you'd imagine out of an 20% ABV beer.

Received from @2beerdogs in NBS BIF 10 – Thanks Derek! Reviewed 1/26/20.
“2018 Edition”. Etched on the shoulder above the rear label “B#573 6/25/18” above “11:19 005479”. Stored at home at 42 degrees and served at 55 degrees (as stated on the label) in a hand washed and dried Jester King snifter. Final temperature 62 degrees F.
Appearance – 3.
First pour – Medium brown, clear.
Body – Dark brown/black, opaque. When held to direct light, a very deep red-amber, translucent. No legs.
Head – Large (Maximum four cm, aggressive center pour), tannish with large bubbles nosily popping, gone within a minute after the pour is completed, leaving thin partial ring of tiny bubbles, fed by effervescence. While not fizzy, the head demonstrates no tendency to last. At 18.9% ABV, this is not surprising.
Lacing – None, again 18.9% ABV.
Aroma – 4 - Has an almost watery raisin aroma with some weak wood and possibly bourbon in the background.
Flavor – 4 – The flavor is somewhat elusive, starting slightly sweet and a bit fruity, without bourbon, oak, or hazelnut. The nasal raisins seem to be dominant. No alcohol (18.9% ABV as marked on label) aroma or flavor, but massive numbing of the tongue and soft palate as it warms while being held in the mouth. Alcohol on the exhale. No diacetyl, no dimethylsulfide, no hops.
Palate – 4 – Medium, just short of syrupy, lively carbonation.
Final impression and summation: 4. The appearance in unremarkable, looking like any headless imperial stout. The aroma is most like Flying Dog’s Raison D’Etre, at least to my burnt-out lab nose. In the flavor I find no hint of hazelnuts, oak, or bourbon, just a generic sweetness with a hint of DARK FRUIT, something I didn’t taste (other than raisins) until I was typing this summary. Palate feels good, but I’ve corked the bottle after one glass, so I don’t wake up with my head on the keyboard and beer leaking onto the motherboard (Incidentally, Mrs. Lizard has miraculously appeared and approved the corking of the bottle for later. Maybe today I won’t sleep through Noir Alley!) Overall, I’ve probably rated this too high, but it’s from The Bruery, so, by definition, it HAS to be a superior brew.