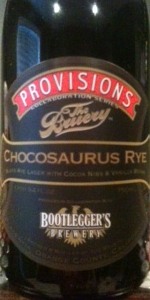 Reviewed by largadeer from California

This beer benefits from warmer temperatures. Not much aroma when it's cold, but it opens up with some nice rye earthiness, bready dark malt (Munich?) and a bit of dark chocolate and coffee. The vanilla is lost beneath the malt and cocoa.

Pretty interesting palate, a decently even mix of rye, toasted dark malt, light roastiness and chocolate with a very slight vanilla note balancing out the earthiness. It's sort of doppelbock-esque in body and sweetness, and is generally pretty easy drinking. Solid stuff, not exactly mind-blowing but I'm glad I bought 1 bottle. Feels more like a Bootleggers beer than a Bruery beer to me, which isn't a bad thing at all.

Reviewed by SilentBob2u2 from California

Smell: coca powder, slight vanilla, and whoopers (you know, the candy, not the hamburger). Also, a bit of old lager smell but not in a bad way, just that its obvious that it's not freshly brewed

Taste: malted milkshake flavor cut by the dry crispness of the rye with a nice lager finish. It's not heavy, it's not thick, it's obviously a lighter beer from the bruey, which has become a rare thing for them. Fantastic malted chocolate flavor with strong cocoa powered taste (bakers chocolate, minus the bitter).

Overall: great mashup of rye and lager with chocolate and vanilla. Wish the vanilla was a bit more pronounced but overall it's a great venture into early days of beer mashups before it became the norm. Highly recommended if you can find a source that has aged it properly. The Bruery strikes again!!

3.5/5  rDev -5.7%
look: 3.5 | smell: 3.5 | taste: 3.5 | feel: 3.5 | overall: 3.5
A: Poured into a pint glass to a black beer topped by a half finger of dense tan head that fades quickly to a collar around the edge of the glass with some lacing.
S: Smells of dark chocolate, cocoa powder and spicy rye
T: Taste is chocolate and some slight spicy rye malt but mostly chocolate. Slight hints of faded vanilla at times as well paired with some sweet chocolate notes. Swallow is rye spice, slight oxidation and more dark chocolate.
M: This one is on the lighter side of medium with carbonation that's soft but just below prickly. Slightly velvety and slick in the mouth. This beer has a slightly drying finish.
O: Overall not bad but probably a bit better fresh. It still drinks pretty well but there are some low spots that were probably filled by other flavor notes. It has some decent complexity and flavor and I'm happy to have tried it.

Taste was like chocolate and lager yeast. Weird. Ample hops, didn't expect that. Some vanilla. Mostly chocolate though.

Pretty simplistic but also unique. Why don't they make more easy drinking chocolate beers, they don't always have to be porters or stouts.

Reviewed by portia99 from Massachusetts

A - Pours black in color with a thick finger plus of frothy mocha colored foam with good staying power. Head falls over a couple minutes nad leaves behind some light, foamy lacing.

S - Interesting aroma - lots of caramel and molasses, tons of maltose - quite sweet overall on the nose. Some spicy rye, hints of vanilla, and touches of burnt, acrid malt.

T - Mildly tart up front, followed by burnt malt, some charcoal and a light hoppy bitterness. Molasses and dark caramel.

O - Ehhh...kinda non-descript. One of those beers that is just kinda "there". Doesn't impress, doesn't really turn me off - just nothing special. Malty and sweet, seems maybe a bit underattenuated. Lots of worty, unfermented maltose aroma and flavors found here. Not one of my favorite Bruery offerings.

I'm pretty sure I remember some crappy knock-off cereal from back in the day either being named or having a mascot named "Chocosaurus"... Regardless, this stuff pours a deep black-brown topped by a finger or so of khaki foam. The nose comprises mild roasted malts, chocolate powder, toasted rye bread, and a touch of what seems like clove. The taste brings in more of the same, with no clove and a bit of really light dark fruits hiding, almost cowering in the background. The body is a straight medium, with a light moderate carbonation and a sorta/kinda drying finish. Overall, a nice little beer, though I think I was expecting a bit more chocolate flavors. That said, it's still pretty good.

3.85/5  rDev +3.8%
look: 4 | smell: 4 | taste: 3.75 | feel: 4 | overall: 3.75
thanks heaps to drlovemd87 for bringing this rare beauty over. a beer I thought I may never get to try, fortunately his impressive cellar unearthed this for us to get into. it pours a flat black color, lacking luster like some of these have, a dead giveaway that cocoa nibs are rocking this one out. its got a nice head, grayish tan in color, and the beer appears quite dense. the nose is unsweetened dark chocolate right out of the gate, with the vanilla additions being really subtle, and the roast of the barley not being as heavy as it looks like it should be. the rye malt is very intense, not quite out of balance, but very forward. very little bitterness to the taste too, although to cocoa gives it an earthy edge. the rye makes a contribution of front of tongue spice and body. the weirdest part of this beer for me is that its a lager. the yeast tries to crisp up and clean up a complexity of flavors that doesn't want to budge, and I think its lost a little in the process. I would like to see this made again as an ale, and then have the two side by side to compare but I think its a little disjointed as it stands because of the lager yeast. still, a very unique and enjoyable brew, with a drying finish uncommon in a beer this dark. the alcohol is minimal, and the body is big but not too big, they rye does a nice job with that. id love to see this made again, but if it isn't, I am grateful for the opportunity to drink with some great folks.
May 30, 2013
Chocosaurus Rye from The Bruery
Beer rating: 84 out of 100 with 160 ratings