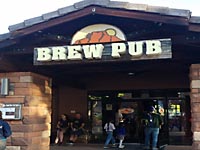 Rated by Oakley from North Carolina

4.4/5  rDev +13.1%
vibe: 4.75 | quality: 4.5 | service: 4.25 | selection: 4.25 | food: 4.5
An awe-inspiring location indeed, but if you've already spent the day in Zion, then you're well aware of just how inundated with hikers the area can become. Get here--and everywhere else, for that matter--early, because visitors will pack it in and parking spots will be at a premium. To that end, if you're already parked in Zion, you'd be better off walking here, as it's literally right in front of the south entrance. What's 100 more steps on a day of 30k anyway, right?

Nestled below stunning red monoliths, the brewpub is dwarfed to look smaller than it actually is. It's quite the spacious restaurant inside, with plenty of booths and benches in multiple sections, but I'm sure most will opt to be seated in the equally large outdoor patio so as to take in the beautiful panorama between rejuvenating sips of beer. As you will find all throughout the area, most of the staff here are hiking and outdoor enthusiasts, but our server was also very knowledgeable about the beer itself. And I must add, the bulk of the selection I ordered finished so cleanly I was questioning my palate, as I mistook my order for such solid standbys like Sierra Nevada's Pale and Voodoo's Wynona's Big Brown.

Despite that noteworthy showcase in quality, the true star of the show here is the food. We had the wagyu bangers & mash as well as the buffalo meatloaf. While the bangers were tasty, particularly due to the unique accompaniment of mango-apple chutney, the meatloaf with stout demi-glace was absolutely scrumptious, and gigantic! Our 8+ hours of hiking was instantly offset by this gluttonous indulgence washed down by liquid carbs.

Rated by Lucnifter from California

4.13/5  rDev +6.2%
vibe: 4.5 | quality: 4.5 | service: 4 | selection: 3.5 | food: 4.5
Had an early dinner here after a day of hiking in Zion. The brewery is conveniently located right outside of the entrance to Zion National Park. Springdale itself is a great little town with lots of good local restaurants, hotels and shops. It's a very secluded yet always busy vibe, being surrounded by the mountains.

I had two beers on tap and both were solid. The Bangers & Mash was outstanding, probably the best meal I had in that area. Staff was friendly and service was quick. I'll definitely stop by again if I ever visit Zion again.

The location of the brewpub is pretty sweet, as it's just a stone's throw from the entrance way to the park (a short walk over the Virgin river bridge). Located at the gateway to the park, it goes without saying that the ambiance here is pretty outstanding. Otherwise, there's really nothing particularly outstanding about the pub. They have a nice outdoor terrace/seating area, with a Applebee/TGIF vibe going on inside. One thing that's nice and a bit unusual for Utah, is that they have a small, separate taproom near the entrance way to the restaurant (just to your left as you walk in), so you're not required to order food if you just want to enjoy a glass of beer.

In terms of beer, I think they had about 12 or 13 selections on tap the day we stopped in (no guest beer options). In terms of quality, my expectations weren't all that high, and so the brewery easily surpassed them. After sampling beers from Moab, Silver Reef and Kiitos, I had an even higher opinion of the beers I sampled here.

On this particular day, I got a sampler tray of the stout, juicy ipa, house ipa and the pumpkin beer ($12 for 4 beers- looked to be 4 ounce pours per glass). None of the beers were jaw droppingly awesome, but on the other hand there wasn't a dud in the bunch. Both IPA's were solid and well crafted, and the stout exuded coffee, dark chocolate and molasses. The pumpkin beer had considerable clove, nutmeg and cinnamon, though without much pumpkin flavor. All 4 beers were enjoyable I thought.

Service was fine. In the taproom the server just pours and hands you your beer, with minimal conversation and interaction.

Shrug. Nothing spectacular here, but this is nevertheless a solid place with above average beer. I would go here again.

4.03/5  rDev +3.6%
vibe: 4.75 | quality: 4 | service: 4.25 | selection: 3.5
Under any circumstances, you have to give more than some love to Zion.
First, the setting: probably it is the most intimate to view the many sculptural jewels that the National Parks has to offer.
Second, the state: not hospitable to something as innocuous as brewing and something so essential to partaking meals.
Third, the site: this Brew Pub is located at the end of a magnificent journey into one of the top 5 (IMHO) National Parks. And if it was a hot day, this would be a a god-send. No more truthful statement than: location location, location.

For all of the above, I rate very high in Vibe. For Quality, I'm more cautious: I liked their O-fest; but did not have a flight.
Service was fine as I was one of the few in the bar at noon and most people were in the restaurant having lunch.
I don't fault them for serving only their brews, but I don't rate high for being non-competitive either.

Overall, a great idea for a brewpub in a setting, state and site that needs it.

3.81/5  rDev -2.1%
vibe: 4 | quality: 3.75 | service: 4 | selection: 3.75 | food: 3.5
Tourist trap in small plaza just before the entrance to Zion National Park. Small L-shaped bar on far right of dining room seats about a dozen with tables and booths in dining room, a separate tavern and a large outdoor patio. Place was crowded with tourists and service was on the slow side. 11 house beers on tap, I had the 2 IPAs, the Juicy IPA was above average. I also had their stout stew, which tasted alot like Dinty Moore with much less beef. Pricey, but that what happens at tourist traps.
Oct 15, 2019
Rated: 3.82 by cbcrunch from Wyoming

Reviewed by Strelnikov from Texas

4.5/5  rDev +15.7%
vibe: 4.25 | quality: 4.5 | service: 4.75 | selection: 4.25 | food: 4.75
I was genuinely surprised by these guys. Being a serious beer freak, I always approach brewpubs (and especially those in perfect locations) with a certain amount of doubt, but they are producing some damn good beers. The Heffe and stout were particularly good, but the Peach Sour, which they had just tapped, was OUTSTANDING! It was amazingly balanced; long on the local peaches and quite restrained in it's sourness. (***for you beer freaks out there, it's a lacto sour, but much less acetic than similar styles in the Pacific Northwest. You can easily drink several of these without annoying at the vitals of your digestive system).

Then there's the food. Again, I was surprised. One can reasonably expect to pay 25-40% more for reasonably sized meals anywhere near the parks in Utah, but the portions here were HUGE! I had a Reuben with the overall heft of large double cheeseburger. After a day of hiking, their food is perfect.

One benchmark I was particularly impressed with was their onion rings. I know they're a fairly common item on a lot of menus, but they are rarely done with any real care. The ones here were exceptional! Oh, one other highlight: THEY ACTUALLY SERVED POUTINE!!!!! For aficionados, this is a rare treat. They're hard to find anywhere in the southwest, even here in Austin!

So, in a nutshell; this place is damn good! The food, the beer and the staff are all way better than you might expect from an establishment in such a tourist-driven area.

Rated by GregJ from Louisiana

Rated by ThePaleRider from California

4/5  rDev +2.8%
Nice beers and great service. Same problem as all tourist traps is the price for the food, but when in Rome.
Oct 14, 2014
Rated: 4 by RoseHulmanBeerClub from Indiana

Inside they've got restaurant seating and a bar, and then a nice outdoor patio area with a lot of seating. We sat outside in the nice evening breeze, with spectacular views of the canyon walls and the Virgin River right behind the brewpub.

So not a huge selection, but I had a flight of 6 oz tasters of the Redemption, Delusion, Red Altar, and Jamaican, and then a pint of the Redemption. All were solid, but nothing to write home about.

We just ordered an order of the chimichurri fries, which were good. Waiter was friendly and checked back often. Option for non-beer drinkers was Red or White house wine.