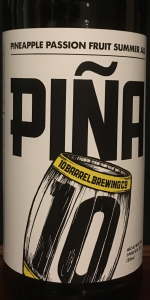 Notes: Piña is a light easy drinking Summer Ale made with pineapple and passion fruit. The perfect beer to run away with on those warm Summer days.
View: Beers | Place Reviews
Reviews: 20 | Ratings: 60 | Log in to view all ratings and sort
Reviews by stevoj:

Bottle from Boise Co-op. Pours out a hazy orange/golden. Minimal head. Pineapple comes through in aroma, a bit if passion fruit musk, mildly. Taste is just fruity, not favoring either the pineapple or the passion fruit. Finishes fruity and a faint tartness. Slick mouthfeel, refreshing.

I saw this at the store and was really excited because a pineapple/passionfruit beer sounds really tasty and interesting so I bought the variety 12 pack which said it included 3 bottles each of the IPA, Apocalypse IPA, Sinistor black ale, and the seasonal beer. I assumed the seasonal beer would be the Pina, but when I got home and opened the box, it turned out to be the Riding Solo APA instead, which I guess must have been the spring seasonal release. So I was really disappointed to not have the Pina, but was very pleasantly surprised to find I really really liked the Riding Solo, as well as all three of the other beers. This heightened my expectations for the pina, because now I knew 10 barrel brews some incredibly tasty beer, and I assumed Pina would be no exception, so I went back to the store to buy a 6-pack. Unfortunately I was wrong.

L: Murky amber color with a thin-ish head. To me it looks like watered down apricot juice, but I'm colorblind, so take that with a grain of salt.
S: In a word, unpleasant. Smells like rotting fruit. Not a super strong smell, but definitely not a good one.
T: Not much taste. Slightly sweeter than an average beer of this abv. KInd of an unbalanced maltiness- I don't know just a sort of mediocre beer taste. Maybe a little bit of fruitiness on the tail end but if I didn't already know there was fruit juice in it, and hadn't sniffed it before taking a shwill, I probably would have never guessed this was a fruit beer.
F: Kind of thin and watery, yet cloying aftertaste.
O: Perhaps I'm grading it a bit harshly since I had such high expectations, but honestly its just not very good. The smell is pretty gross, and it really doesn't taste much like fruit. It's really a very mediocre beer. While I'd highly recommend trying all four 10 barrel beers I got int the variety pack, I don't see any reason anyone should bother with this beer.

Pours a cloudy dark golden color with very little head but a fresh white collar. smell is pineapple and pear and other white fruits. Taste is all white fruit and pineapple with a sweet fruit juice aftertaste. mouth fell was medium low carbonation and sweet. One was enough for me on this one.

12 oz bottle purchased and consumed in Oregon.
Pineapple and passion fruit in about equal measure; very well balanced with each other and with the malt load. More tart than sweet.
Medium carbonation and medium-light body.

I will admit this is a quite lovely hazy yellow with a big head. I thought it would be appropriate to use the Stella Artois glass, since it's another AB InBev product. The smell, however, is moldy grapefruit with a whiff of the paint locker.

The taste is spoiled fruit with a sourish edge. There's an unpleasant bitter tang that makes me think of the coconut water that also turns out to be bad. I thought this beer was just announced a few weeks ago, so it seems unlikely it would be just plain bacterial, but that's what it tastes like. I can't find a date on the 22 oz bottle in any case. The bitterness seems subtle as you sip but then it gets a grip on the tongue. Adios, MF!

Light golden, hazy, decent finger of head on the pour.

Full body, medium to low carbonation. It starts to get heavy after half a glass. Pina is a bit heavy for a small beer.

The fruit dominates. Unlike lots of pineapple beers that I've had, they didn't dry it out. It seems a little heavy for a summer ale, though I can appreciate how they used the tropical fruits.

22oz bottle served in pint glass. As soon as I crack open the bottle the pineapple aroma is obvious. Also obvious: this pale golden beer is going to be CLOUDY. There's a thick layer of sediment (I'd guess as much fruit pulp as yeast trub) at the bottom of the bottle (no freshness date, incidentally). Inhaling the beer into my nose the passion fruit flavor is clear as well. Flavor is juicy (in the sense that fruit punch is juicy) as expected, but there's the familiar flavor of alpha bittering hops on the middle of the palate. 10 Barrel clearly wanted to for for a Summer Fruit beer that's actually a beer, when they clearly could have called it quits and just sold malt beverage alcopop. Do hops taste good with passionfruit? Maybe not. But the result achieves a balance (sort of) that's probably far more drinkable that alcoholic fruit juice would have been alone.

Poured from a 12 oz. bottle into a chalice.

Appearance: Pours a somewhat hazy golden orange with a moderate amount of bubbles. Slight finger of off white head which settles into a thin patchy layer.

Mouthfeel: Light bodied with a moderate level of carbonation. Crisp and smooth.

Overall: A decent light fruit beer. Nice pineapple and passion fruit flavor but not much else.

It pours hazy gold under an off-white moderately persistent 1/2" head that streams of rapidly rising bubbles from the bottom of the glass refresh. Piña has a very definite floral pineapple smell with tropical fruit and a faint hint of smoke that swirls off. A big fruit cocktail palate has pineapple, passion fruit, floral, and spice flavors that push it nervously close of alcopop but it still holds tight to a mild beer character with traces of caramel and has a sweet tangy finish. It has a moderately light body and above average carbonation. It is refreshing and drinkable.

We had it in Hawaii at Street Burger in Kapaa and it worked very well in that setting. Tasty and refreshing with very forward tropical fruits, predominantly pineapple with some passion fruit.