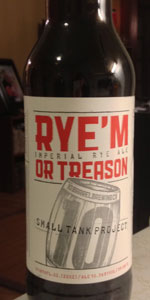 Reviewed by nmann08 from Virginia

The nose is citrus and piney hops, rye, malt, caramel, sweet brown sugar, bourbon booze, and vanilla. The flavor is citrus grapefruit, barrel notes, molasses and caramel. This is still pretty hot, could mellow out, but you will loose the hop notes that balance it pretty well.

I would just drink it for what it is and enjoy the booze flavor.

Reviewed by deschutes_fan from California

- Pours a deep amber-ruby, 1/2" thick foam.
- Smell is rich caramel, rye spiciness and a little funk (unexpected).
- Taste is toffee and bitter/malty rye up front with some good barrel and whiskey notes to finish and maybe some stone fruit.. Almost no heat with medium body.
- Overall an impressive beer, definitely best thing I've ever had from 10 barrel. Good complexity and nicely integrated whiskey and oak barrel flavors (probably helps that this is 1.5+ years old. Main complaint is a little too bitter (but expected with all that rye). Would like to compare with Rye-on-rye.

A: Golden, cloudy amber with frothy head and sticky lacing.

T: More fruitiness and oak on the taste. Caramel and rye are dominant again, with a definite hop kick in the back. The hop bitterness helps to balance the fruitiness and the prominent oaky caramel sweetness. Rye notes mixed throughout.

MF: Viscous creamy medium/full body. There is a faint whiskey burn, but the oaky vanilla seems to smooth it over.

O: Good, rye beers aren't incredibly high on my list but this one intrigued me. This is right up there with Rye-on-Rye in my opinion, but still not great, for me at least.

T: Spicy, spicy rye whiskey up front. Quite a bite, from both the booze and the rye. Light toffee and caramel again, with oaky vanilla coating everything. Heavy rye malt, somewhat bready. It's like drinking rye bread dipped in rye whiskey. Lingering oak and rye spiciness everywhere.

O: Rye-barrel rye bread. It's like a better version of Boulevard Rye-on-Rye. Perhaps the higher quality barrels makes it? Quite spicy, sharp and delicious, but also pretty one-note (duh). One of the thickest rye beers around, interestingly enough.

Pours a murky dark orange-brown with a foamy bone head that settles to wisps of film on top of the beer. Tiny dots of lace form around the glass on the drink down. Smell is of malt, rye, fruit, alcohol, and wood aromas. Taste is much the same with rye and caramel flavors on the finish. There is a mild amount of woody bitterness on the palate with each sip. This beer has a lower level of carbonation with a slightly crisp mouthfeel. Overall, this is a pretty good beer but the barrel aged presence is fairly subdued in my opinion.

Reviewed by TheEarl from Washington

Appearance: This beer poured a deep orange/brown with a sturdy but thin head of off-white foam. The liquid looks slick—almost like mercury or oil in water.

Aroma: The aroma is booze (from the whisky and the beer), yeast, and earthy hops. The yeast character is almost reminiscent of a Belgian quad.

Taste: The taste is dominated by spicy grain from the rye, caramel sweetness, and bitterness on the finish. This beer tastes like an intense hybrid of Bigfoot and Ruthless Rye.

Mouthfeel: The bottle advertises the viscosity of this beer as being extreme, and it is. The alcohol is much more present than most beers in this ABV range. However, overall, the mouthfeel is quite good and very much in line with other great barleywines.

Overall: I loved Rye’m or Treason—apparently more than most people thus far. This is certainly not a balanced beer but, I don’t think balance was the goal. For me, the spice, paired with the sweetness and the yeast, cut by the alcohol, made this one of the more interesting beers I've had in a long time.

Very strong whiff of rye and whiskey (from barrels) upfront. 3 different kinds of rye. A good mix of sweet, spicy and "hot".

A festival of rye here with plenty of rye character. The whiskey part is appropriately subdued as to allow the complexity of the rye to shine through. Raisin/date also comes to mind.

Lingering sweet, spicy rye with a touch of raisin. Very clean and the alcohol stays in check, just as I like it.

I'm tempted to buy another bottle for aging. Something for the rye lovers among us. They even took the time to wax the bottles so all you need to do is stash them in a cool,dry spot.

A - Pours a carmel brown with a two inch light tan head with good retention and streaks of lacing left on the glass.

T - Sweet biscuity, booze, then light carmel and a touch of fruit.

Reviewed by JohnGalt1 from Idaho

4.15/5  rDev +4.3%
look: 4.5 | smell: 4.5 | taste: 4 | feel: 4 | overall: 4
From the bottle, "This is a strange beer from a strange brewer. Containing three varieties of rye, the beer is as viscous as Motor oil - just how we like it. We used Rye whiskey barrels from High West Distillery in Park City, Utah and aged the beer for 6 months at temperatures that weren't exactly by the book. It's anything but ordinary, just like Bobby."

Wow.... The nose is thick... Tons of whiskey... caramel notes.. "spicy", but almost in a cinnamon way... The hops are there, but seem like a floral quality.

Flavor thankfully is not as sweet as the aroma led me to believe... Great grainy, almost nutty notes... plenty of wood and alcohol... bitterness never really manifests itself until the finish and there it lingers oily with the whiskey. Interesting, but needs to be smoothed out a bit... Not sure, but I believe it could use a touch more residual malt sweetness to help blend the very distinct qualities.

Also the beer isn't as "viscous" as advertised... instead has a palate on the slight plus side of medium that is accentuated by a soft small bubble carbonation.

I dig this one.... Not sure that it will age well, but I think a little time in the bottle will round out the flavors better.

Edit: not sure this should be in the American Barleywine category, but it definitely should not be in the "rye or roggenbier" because it is just too damn big and Americanized... Also, I don't think "American Strong Ale" is right either, so I went with ABW.