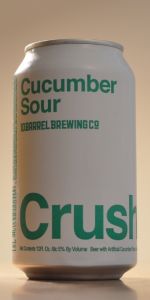 Bought a single 12oz can $2.69 Fujioka's
57 days before best by date
Faint light smell of cucumbers
Light golden color
Light-medium mouthfeel
Medium carbonation
Taste of cucumber does come through, but not strongly so it is nicely balanced. Light tartness/sour aftertaste
Overall a refreshing beer, but not really like a sour beer. More light a cucumber pilsner so rating it based on description.

Taste: Lightly sweet, lightly grainy, then, a perceived hint of citrus acidity. It's a very lightly sourish sour with a cucumber flavoring that, while likely artificial, is not altogether unpleasant. Also, it's a swift taste, here for a brief moment, then gone.

Overall: I don't mind the occasional pickle, but I do not like raw cucumber, finding but the taste, smell and texture to be rather unappealing. So it is that this beer only made it into my home, my sanctuary alongside its brethren within the Beers of Cheer 24-pack. And even then, I've reached for nearly all of the others, leaving this one to sit because, well, cucumber. Ultimately, it's like a mild, lager-like ale dosed with a bit of lactic acid and cucumber flavor. Even then, I don't mind the thing...

this is the second crush flavor i’ve tried. i love the flavor. the hint of cucumber with the strong sour flavor is perfect to me. i like how it’s not super heavy of a beer either

I got a can of this beer from a mixed holiday 24pck that I bought from my local Target store. It poured a slightly hazy golden with thin white ring head that is not leaving any lace. The scent had cucumber and subtle earth notes. The taste was nicely balanced and easy to drink with sour tart berry fruit base with cucumber highlights. The mouthfeel was lighter in body with good carbonation. Overall it is a good beer.

On tasting, the sour aspect turns the cucumbers to pickled. There is some saltiness on the lips.

Overall, I like cucumber a lot, but here the sour aspect didn't do it for this palate.

Very easy to drink. Perfect for a summer day. A little tart with cucumber. Clean finish.

To be clear, I do not like cucumbers. I tried this sour in an attempt to broaden my horizons.

Look: Pours very pale yellow with about 1.5 fingers of bubbly, fizzy foam that leaves quickly. After about 3 minutes it is all gone.
Smell: A little pungent with, of course, cucumbers. No malt or hops.
Taste: Sweet with cucumbers and cucumbers and cucumbers.
Feel: Semi-dry with a little after taste.
Overall: I gave it an overall low rating as I just do not like cucumbers. All the characteristics seemed to be about right just you need to like cucumbers to get this down.

In the nose: Well, there's the cucumber. And here comes the sour. That's it, in the nutshell.

"Drink beer outside." it says on the label. Sorry, it's raining tonight, I'm staying in.

Cukes, eh? Pours a light golden color with light head - typical of sours. Vegatable / garden smell. Taste is cucumber with grassy back taste. The can's label does let the cat out of the bag: "Beer with Artiificial Cucumber Flavor Added."

For all that, It's surprisingly pleasant and refreshing in a nice way all it's own.

12 oz Poured into my chilled glass mug
Looks light yellow with a greenish tint fizzy white froth head falls fast
Smells like a LIGHT lemony pilsner
TART, refreshing, Lemony-sour, I can taste cucumber at the end ,
Feels light and very CRISP
I’ll be drinking this in the summer
I love the design/label, glad I tried this one!
Smooth, easy, tart, crisp;I love it!

S: Tartness with lemon citrus. A bit of funk.

T.F: Light... some crackery grains to start with lemon citrus. Tart without being sour. Nice burst of cucumber towards the finish. A bit of funk and vinegar but not really pickle-like. Crisp and refreshing... well carbonated.

O: A very nice tart cucumber beer. Great for summer... and 10 Barrel has really been nailing their 'Crush' series.

This my go-to beer now, it is so refreshing. I really don't like hoppy beer and craft beer is hoppy. This is what beer should taste like, smooth, refreshing, and a great after taste. Will be start tasting all the other versions soon. They have a variety pack per their website, so that is next for me. I found this beer at Lincoln City Oregon Grocery Outlet. Thanks for stocking it!

Can at Steve's Snappin' Dogs, DEN Terminal B, Denver, CO

A: The beer is slightly hazy yellow in color and has a light to moderate amount of visible carbonation. It poured with a short white head that rapidly dissipated.
S: Light aromas of sour cucumbers are present in the nose.
T: The taste follows the smell and has flavors of sour cucumbers, although not nearly as sour as a half sour pickle.
M: It feels a bit more than light-bodied on the palate and has a moderate amount of carbonation.
O: This beer is easy to drink and has a good amount of cucumber flavors.

Taste: Tart cucumber bursts with pickled flavor; grainy through the middle and crisp on the finish

Overall: Well done, but you have to like a tart cucumber beer; not everybody's thing, for sure