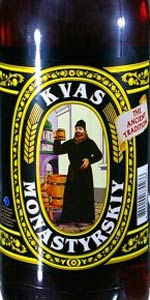 Reviewed by Mark-Leggett from Missouri

Reviewed by OzmanBey from Massachusetts

4.81/5  rDev +54.2%
look: 4 | smell: 4.75 | taste: 5 | feel: 4.75 | overall: 4.75
Smell: strong rye smell that's pleasing, not overpowering
Head: Fizzed quick like a cola
taste: nice clean rye that lingers on the pallet for a few seconds. Very enjoyable not sugary or syrupy
Feel: has a lightweight on the tongue that helps bring out the flavor when you allow air into your mouth. It has a nice clean taste that doesn't leave your mouth with a coated feeling.
This is probably one of the best Kvass on the market. I highly recommend this to anyone looking for a nice kvass every so often.

3.71/5  rDev +18.9%
look: 3.5 | smell: 3.75 | taste: 3.75 | feel: 3.5 | overall: 3.75
Pours a dark brown similar to a hearty black tea or cola. It pours fizzy, with no head formation just like a soda pop. Aroma is sweet tea, molasses, caramel, and Coca-Cola like spices. Flavor profile is similar, hitting sweet notes of caramel, toffee, and sweet tea. There is still a thin layer of Coca-Cola like spices at the back. Rye spice and earthy bread add to the mix. Mouth feel is fizzy, although a little flatter than a soda pop. Overall, drinks like a sugary soda but with a little touch of alcohol. Very interesting beer, and when compared against the style notes on the Beer Advocate page, it does well.

Served in a 12oz snifter from a 2L bottle.

Did not realize until I opened it, tasted it, and then did a quick google search of the product of what I had actually purchased. Since I'm also a lover of beer and I see it on here I figure I may as well give this a review while I'm drinking it.

Looks, pours, and feels very pop-like. It has a big, quick fizz at first but that fades and the beer/pop becomes flatter as it sits in the glass.

At first its aromas remind me of black licorice, or anise, or molasses, or a malty doppelbock or amber ale, with a lot of sugar added. It's flavor has notes of the same. Molasses, caramel or amber malts, raisins, iced tea, apple juice. It doesn't taste terrible, but its really akward drinking something that looks and feels so much like a soda pop yet is flavored like a beer. It's sugary, too sweet to be beer, but mild sweetness when compared to american sodas.

This style is really not something I plan to seek out again.

Reviewed by Ristaccia from Nebraska

Taste: A less sweet version of Welch's grape juice. Carbonation is low, and it isn't overly sweet, so it's very quaffable. I opened this 2L expecting to have a few sips for the style tick and pour the rest out, but this is really enjoyable. I could see this working really well during the summer in the same vein as radlers.

Overall: Pleasantly surprised with this Kvass, and will be looking into others within the style. If only they could be found locally, rather than with expensive shipping via Amazon.

Reviewed by Justin23060 from Virginia

T- Very Malty. Sweetness is of added sugar or corn syrup perhaps? Like a malty beer minus the hops and alcohol. Not at all unpleasant. Again iced tea comes to mind.

O- My first stab at this style. It's like a malty iced tea with raisins and soft carbonation. I'm enjoying it, but I imagine it could get sickening in larger quantities.

3.19/5  rDev +2.2%
look: 3.25 | smell: 3 | taste: 3.25 | feel: 2.75 | overall: 3.5
A: The "beer" is crystal clear amber in color and has a moderate amount of visible carbonation. It poured with a thin off white head that quickly died down, but there are a couple of small patches of bubbles on the surface that are continually replenished by the rising carbonation.
S: Light aromas of cola and dark fruits are present in the nose.
T: Like the smell, the taste has flavors of dark fruits—grapes and raisins seem to stand out in particular—and has some sweetness. The sugariness becomes more apparent as the beverage warms up, although it was never became cloying.
M: It feels light-bodied on the palate and somewhat fizzy with a moderate amount of carbonation.
O: Among the kvass that I have sampled, this is the one that tastes more like soda and doesn't have any flavors that might be considered unappealing. If someone gave this to me in a blind taste test, I would have thought that this was some type of blend of a soda and juice.

Appearance: dark brown hue with a clear body and a light effervescence. There is no head or lacing on the glass at all -- aside from the few bubbles, this appears completely flat. Not unusual in a kvass, but still not super enticing.

Smell: lightly bready with a definite dark rye character and a bit of a molasses aroma. Not bad, but pretty light.

Taste: bread, molasses and a little bit of chocolate character are all present. Pretty sweet but not cloyingly so. Actually a pretty tasty kvass.

Mouthfeel: light body with minimal carbonation. Not quite insipid, but getting there.

Overall: a tasty kvass, but I like a little bit more effervescence. This would help it a great deal, I think.

Reviewed by ColForbinBC from New Jersey

Pours a cola-like brown with a bubbly, fizzy tan head. The body sits a fairly still dark brown with no lace anywhere. The nose is fairly sweet brown sugar, rye, dark malt...kind of a pumpernickle/brown bread presence. On the palate, sugary cola-like sweetness, with rye, dark malt, and brown bread. The taste is a little off-putting at first. Think carbonated wort. The feel is exactly what you think carbonated wort would taste like. Sweet sugary malts and mild carbonation. Medium body and syrup. I think this bottle was a little old, as the carbonation has fallen a bit. This was worth the tick, but probably not something I need to have again.

Smell is fruity with some chocolate.

It tastes like chocolate flavored soda with some raisin.

It isn't too offensive. It less of a traditional kvas than most.

Giant plastic bottle opens with a muted hiss, into a rinsed pint it pours with little foam at all. Soda bubbles, still surface, glassy. Dark amber in the light, otherwise looks like a soft drink (cola or root beer). Second pour into a dry mug yielded a brief flurry of tan bubbles on top.

Also tastes like tootsie rolls, with a little bit of cocoa and currant/grape flavor too. More specifically a grape tootsie roll pop I suppose. Fizzy, astringent soda carbonation. Rather sweet and one-dimensional.

The first glass disappeared in minutes, it's refreshing if nothing else, but sugary.

Pours a clear darkish iced tea color with a fizzy 1 inch beige head that fades to nothing. No lacing whatsoever either. Smell is of rye bread, raisins, grapes, figs, and maybe some prunes. Very big dark dried fruit aromas. Taste is of bread, raisins, prunes, and some brown sugar to boot. Very much like a raisin bread in liquid form. I am pleasantly surprised by this to be quite honest. Pouring this out was quite fizzy but the mouthfeel is a tiny bit flat with some small carbonation bubbles on the tongue. This is my first kvass ever and I must say I think that this is a good "beer" coming out of Ukraine. I was expecting something disgustingly gross but I actually really enjoy drinking this one. I will be on the lookout for more kvass to do some comparisons.

2.91/5  rDev -6.7%
look: 3.5 | smell: 2.5 | taste: 3 | feel: 3 | overall: 3
Right off the bat, this is far more carbonated than most representatives of the style. The head even sticks around a bit as a ring, and you can see the bubbles streaming upward throughout the time it takes to empty the glass. It pours a chestnut brown, about normal for the style. Smells thin, and somewhat sour, even acetic a bit. I wouldn't call that exactly pleasant. Luckily, there is only a smidgen of the tang in the taste, and mostly at the finish. Mostly, you get some light sweetness up front, followed by some almost crackery breadiness, and then the sour kicks in. Somewhat refreshing, but a bit off balance.
May 15, 2011

I have to say, theirs have been some of the more carbonated examples of the style thus far. The bubbles are tiny and tight, like soda pop and the resultant head lasts about as long as it does with pop. Color was arguably either mahogany brown or garnet red, but with NE-quality clarity either way. Nose was like a box of Raisin Bran coupled with the interior of a tobacco drying barn. Very earthy, dark and deep in terms of its scent. Mouthfeel was sort of thin, kind of flat given all of the CO2 bubbles, with flavors of raisins, malt, milk chocolate and tobacco. Interesting, to say the least. Finish was very sweet, very malty for my taste. I did like it more than some of the other standard Kvasses that I have tried so far, however.

I just sliced off a piece of Kulich (Easter bread) and it goes REALLY well with this version of Kvass. Man, I need a Russian mail-order bride at this rate.

The aroma displays cereal, toasted sweet bread with a thin edge of burnt sugar along the side, and "Ovaltine".

In the mouth it's light-medium in body with a very moderate carbonation that's just enough to help keep it refreshing. Interestingly, all kvas used to be served flat until the 1980's when producers started carbing it up to compete with western soft drinks.

The flavor follows the aroma, but it's less cereal-like, and more like caramel nougat. It's also sweeter in a cola-like way; and there's an edge of milk chocolate or dark cocoa to it. There's obviously no bitterness added to it, and it's not tart in any way. It's sugary and bready sweet but it doesn't overwhelm (it's clearly kvass and not "Malta"). It lingers in the mouth with a residue not unlike that of cola, except that there are no mint notes to help balance it.

Overall, it's well made and fairly drinkable but it lacks the character of some of the better examples of the style.

The Kvass Kick continues, baby! This one pours a clear garnet-brown (heavy on the garnet) topped by a short-lived bit o' ecru soda fizz. The nose comprises pumpernickel, maple syrup, fennel, and a touch of light roasted malts. The taste isn't too different, though whatever roast character dwelled within the nose has escaped so that it may avoid the gullet altogether. The body is a light medium, with a fizzy carbonation and a light syrupy feel. Overall, a decent kvass, but this one's a bit more fizzy and soda-like than the others thus far. Can't say that that endears it to me very much.