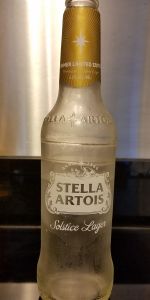 Look - Pours a dense and fluffy white head that evaporates quickly. Crystal clear, pale yellow appearance with tons of streaming bubbles.
Smell - The scent is mostly barley malt with a hint of grassy hops and maybe some lager yeast.
Taste - The taste follows the nose and there's also some lemon citrus qualities. No bitterness to speak of.
Feel - Has a thin, crisp, and somewhat chalky mouthfeel and finishes pretty dry.
Overall - The flavors are good, but the slightly chalky mouthfeel brings the drinkability down a bit.

Look: Pale gold appearance. Drank out of the bottle so can't comment on the head or lacing.

Smell: Not much here, simply a light, fleeting citrus scent.

Taste: Extremely sharp, harsh, and had to pour out after a couple sips. The citrus scent was not followed through in the taste for me.

Overall: Absolutely terrible. Unfortunately, I had to pour this out after the first couple sips. A hard pass for me.

Nothing special about this beer. Although it's Stella Artois it is not much more appealing than a Miller Highlife. There isn't any real positive things I can say about it except it sure beats the he'll out of a Natural Light and it would make a good light beer to drink with a meal. I just don't care for lagers much if they come out of an American brewery. European lagers are best. Stella Artois is being brewed anheisser Busch now. They can fuck up just about any beer with decency and character. Ales are the the way to go. Most all ales have a better flavor profile than lagers. Even the crappiest ones

Tasteless is the best thing I can say!

Quite pitiful. It looks good, pours good and has an average feel. The taste is utter shite however. Tastes like carbonated mango juice and urine. Incredibly bitter and sharp upon initial mouthful. Solstice Day is the shortest day of the year, if only my experience with this beer was just that.

25 oz can from Roth's Market in West Salem OR.
$3
Sadly brewed in the USA .
Actually pours a slightly darker gold then expected. Nice white head.Goes fast though.Some lacing.
Aroma is of light barley..malts. NOt too bad,least not corny.
Taste is sweet at first then fuller and malty slight bitterness.
Mouth feel is light but the carbonation isnt good for the style. Way too weak.
Not great but not awful.

Clear orangish-gold, head produced coarse foam that vanished quickly.
Thin yet bright citrus and spice on the nose and equally on the tongue.
A bit watery, kind of reminiscent of a blue moon.
A wimpy body and underwhelming carbonation makes the watery problem even worse.

An okay summer chugger that just isn't worth the premium price

Looks like a medium gold lager in a clear bottle, from which it should be enjoyed - pours a nice head, but will be flat as fartwater by the end, if you pour it into a pilsner glass as I did.

Smells were - was- lightly present for a nanosecond, fresh light clean, and gone even before the head fell out.

Taste is clean and fresh when cold and lively, but kinda falls off to watery liquid before the end, so drink it quick.

Like all else in the brew, it feels fine at first, then becomes water. it's a flash

Overall, worth the $7/sixpack? Barely, but it's really just InBev US summer beer in a stella bottle,'''
A good lite beer if you like 105 calorie/4.5 abv chuggers.

A light shade of gold color with a creamy white cap.

Aroma is on the mild side. I get light citrus in a sort of lemony way. There is a hop edge in the scent but it's mild.

Taste is straight forward Euro lager which is to say hoppy enough to notice but not enough to scare children or frighten horses. I get some grain flavor which reminds me of Miller High Life without the sweetness. It really does not stand up well against common ice beer and at twice the price it's an easy future pass.

Texture is a shade past medium with decent carbonation.

Overall this beer gives me the impression of a promising child who's too shy to step forward. I get the concept of repackaging to stimulate sales but changing the name of a horse doesn't make it run any faster.

Busch beer in new packaging. The high reviews for this are laughable. Lemongrass? Been smoking to much lemongrass.. corn rice adjuncts grass.
Do yourself a favor and buy a icehouse for 1.15. This is very bad

11.2oz clear bottle BB 28JUL21 poured into a Stella Artois chalice at fridge temp 4.5% ABV. The beer pours bright golden straw yellow with nearly white head. The head recedes to a thin ring and leaves no lacing. The aroma is faint with a tangy, lemony, citrus note. The taste is lightly sweet and tangy at the same time with lemongrass, blood orange and lime flavors. Negligible bitterness. The mouthfeel is thin bodied with above average carbonation and a dry finish. Overall, ok. Could be good on a hot day or with certain foods.

Just in time for the vernal equinox...Solstice Lager! #eyeroll

Flavor
Grainy, not very malty. virtually no hops. IT's what Corrs light would taste like without all the DMS

S: Lots of barley. More hops than a Coors light, but less than standard Stella.

T: A hint of citrus.

Stella's regular mass pleasing beer is quite drinkable. So, I expected something from this "Golden Lager".
It looks quite yellow-golden in the bottle. Beer taste is non-existent in the first sip, you feel some citrus flavor.
They probably should not have filtered this beverage 3 times as advertised on the bottle/six-pack.
For me, this is a failed version of a light beer. But honestly, get a Bud Light or Michelob and you are better off ...
Thank you. I tried but won't buy it again.

Happy Solstice Day! Also known as the Shortest Day of the Year, today marks the beginning of Winter in the Northern Hemisphere. I do not hate winter, per se, but neither is it my most favorite season, either. That designation is reserved for the one that JUST ended! 8=( I also have a favorite, in-person trader - @tone77 who recently dropped this off for me, along with some other Bottles (eek!) & CANned beers. I set this one aside especially for today.

So what if it was intended for the Summer Solstice? I could use a little liquid sunshine on this dreary, foggy morning! I was pleasantly surprised when I had to Pop! the cap as I expected a screwed-up screw-top. It was neither pleasant nor really a surprise when, during my pour, it simply evinced a rolling, roiling finger of fizzy, eggshell-white head that quickly dissipated into wisps. This, despite all of the carbonation bubbles in evidence. 8=( OTOH, the color was that of solid Gold (SRM = 5) with NE-quality clarity & so I was visited by the auric triumvirate known as The Gelt Gang!

Mammon, Midas & Croesus have long been my equivalent of the Ghosts of Christmas Past, Present & Future, dropping by to save me from the Cyberpeople & later frequent guests to watch any televised sports in which a team wore gold. As such, they align with me as Pittsburgh sports fans, but include Iowa for college & the LV Golden Knights (as long as they are not playing the Pens). They may squabble amongst themselves about "Dibs!", but they & I all generally get along nicely. But, I digress ...

Nose had an odd grape-y vinousness as well as a cereal-like sweetness. I like what one reviewer said about Cheeri-Os, which were one of my late-Pops' faves, the other being Wheaties. No Wheaties in this one, but definitely Cheeri-Os! Hmm. Mouthfeel was thin-to-medium, about on par for a high-end Lager. The taste was very cereal-like, not unpleasant, per se, but different. It was sweetish without falling into the cloyingly sweet trap that always puts me off. Finish was semi-sweet & while refreshing, it might have been better on 21 June 2020 here in hot, humid Lancaster, PA. Oh well. Perhaps there's next year ... YMMV.

Sweet smell at outset and light fizzy taste that is perfect for summer. Low alc level adds the the refreshment and safety of drinking a couple.

Good tasting beer. I read that is a Belgium beer and brewed there. However, on the bottle in very fine print, it says that it's brewed in the U.S.A.

Pours a not so interesting golden color with a very small white head that leaves the glass quickly. Smells like wheat, bread & grass. Taste follows the nose with some sweet hints of honey. Pretty fizzy beer with a thin feeling to it, goes down smooth. There is nothing really special about this beer at all, but it isn't awful. I'd much rather just drink an OG Stella.

Slightly better tasting Budweiser. So disappointing, Stella is a really solid lager and I was excited to see another version. This is just a cheap US knock off for who knows why. I guess its to compete with US Heineken. Has the brand name, but not the quality. Super colossal 300 car pile up fail.