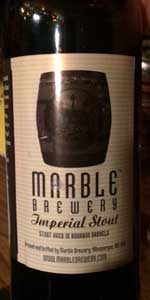 It seems Marble deliberately obfuscates which of their imperial stouts is bourbon barrel aged and which is not; this lack of transparency makes me lose faith in them as a consumer.

Served into a half-pint nonic and allowed to come to temperature over the course of consumption.

HEAD: Dark tan in coloujr. ~5cm in height. Could be creamier, softer, and more robust, but it's adequately thick so as to be enticing. Retention is good for the ABV - ~8 minutes. Leaves no lacing on the sides of the glass as it recedes.

BODY: Opaque solid black, as would be expected. No yeast/lees are visible within.

Appears well-carbonated. Looks like a robust dessert stout. I note no obvious flaws.

I'm not finding overt roasted barley. Lacks overt hop aromatics (to style). More bitterness from burnt sugars or the like wouldn't be unwelcome.

Doesn't evoke bourbon, rich white oak, or the like (e.g. toasted coconut, cardboardy wood). Doesn't seem barrel aged at all based on the aroma - just how long was this actually aged in oak barrels?

TASTE & TEXTURE: Tends towards the sweeter side, but mid second act there is a kiss of roasted barley and/or burnt sugar to inject needed bitterness...no hops though (to style) or truly bold roasted barley. Chocolate specialty malt brings additional sweetness in tandem with rich dark malts.

I would never figure this for barrel aged if I tried it blind, as it fails to evoke oak, bourbon, or anything else (even barrel sugars). No coconut, toasted oak/white oak, vanilla/vanillin, or the like.

It hides its ABV pretty well, staying away from feeling like a sipper. Yet it's full-bodied and has weight on the palate. Smooth for the most part. Unrefreshing. Wet up front, but dry towards the finish. Not powdery, soft, creamy, or silky.

I find no off-flavours.

It's a nice little imperial stout, but it's definitely not up there with the greats in terms of complexity of build, depth of flavour, richness, boldness, or subtlety. Balanced and approachable, and a beer I'll enjoy polishing off, but not up there with the likes of widely distributed expressions of the style like Old Rasputin (if you'll put aside nitpicking contrasts owed to its "Russian" imperial stout designation), Victory Storm King, Great Divide's Yeti variants, Epic's Big Bad Baptist, etc.

OVERALL: A competent and flawless imperial stout that has ample room for improvement. I do dislike that it trades on the vagueness of barrel aging to appeal to consumers (how long has it been aged? Which oak was used? What did the oak barrel used to contain?), and it's hardly intricate in comparison to even widely distributed basic expressions of the style. More expensive than some bourbon barrel aged imperial stouts, and far from as good as the heavies in the style, but worth trying once.

I guess BA decided to switch the pictures to make their BA and non BA imperial stout a game of guesswork as to which is which? And then it seems the labeling itself from Marble leads to questions about whether it is a bourbon barrel, a virgin oak barrel or no barrel whatsoever

Taste is a big and boozy imperial stout, clocking in around 70 ibu I would guess. Nothing in the way of barrel effect going on. Tiny bit of complimentary leather and dark fruit. Chewy and plenty of alcohol to it. A sipping experience, I'd say split this a few ways or it becomes kind of a chore to finish even though it does nothing wrong outside of the labeling experience in confusion. If you're a fan of bitter chocolate malt this might be your jam.

Thanks to my NM Brother @hophound for this burnished beauty.

Pours a deep mahogany hue. Vigorous pour conjures 2 fingers of nicely packed khaki foam. Very little lacing.
Smells deep and complex. There’s a lot going on here. Slightly warm and boozy. Rich burnt caramel, smoky rye barrel, wood char, nuanced cocoa, and slight espresso roast.
Flavor brings even more. Wow, this seems barrel aged. Starts with a warming welcome of heat coupled with a meaty & peaty roast. Some bitter chocolate shines through and then retreats to leather, oak, ever so gentle dry tobacco, and a coffee roast in the finish.
Mouthfeel is chewy enough for this old bastard. A nice meaty Impy Stout.
Overall, this reminds me of more of the RIS’s I’ve had years ago, before all the barrel aging (which I do love) became the fashion. It has that peaty taste that rarely shows up in the current Impy Stout offerings from most brewers. A solid offering from the Land of Enchantment. 4 4.25 4.25 4.0 4.25

Bottle aged close to a year. States "aged in oak barrels". Has coffee and vanilla flavors too it. Fairly decent stout. Curious about bourbon barrel version. No barrel aged flavors come through, though it is a heavier flavored stout. Glad to try. Not a whale of any sort, but enjoyable for sure.

Bottle from brewery. Average pour and normal RIS aromas lead into a big roast grain taste, sharp bit at the finish. Nice blend of roast grains, burnt toast with hints of chocolate. Smooth and light bodied, but tasty, and fulfilling.

S- Vanilla, oak. When I smelled this, I was a bit flummoxed. I still am, because this screams bourbon barrel aging of some kind, even if it is only partially barrel-aged. Roasted malt, a little bit of cocoa and espresso rounds it out. Nice complexity, very forward nose.

F- If I had any doubts that there was any kind of bourbon barrel aging in this beer, tasting it makes it a lot harder for me to keep these doubts. Oak, vanilla, mild smoke, nice cocoa, dark chocolate, dollop of espresso, a bit of booze. Not sure where some of these flavours are coming from if this is a straight imperial stout, as it is described on the taplist. So, I'll have to assume that I'm crazy and my palate is wrong. But it's good.

M- Medium-thinner bodied, lower in carbonation, a bit sticky but otherwise silky smooth. Oaky with a bit of burn on the aftertaste.

O- Decent imperial stout. Not one of the best, but it's certainly interesting and not terrible. I would have liked a little bit of body and less ABV, but going in and assuming that this is a straight non-BA imperial stout did lower expectations a bit.

Imperial Stout from Marble Brewery
Beer rating: 91 out of 100 with 39 ratings