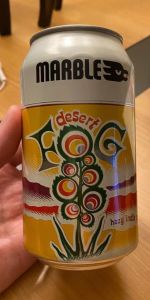 Notes: “Dear Diary, She has a hazy glow resembling the beautiful accumulation of early morning fog kissed by the orange juice-hued southwestern desert sunrise and smells of pineapple-grapefruit juice perfume. With love, IPA”

Absolutely delightful. Super opaque/hazy look. Yes, very “fruit forward” as they say. (In fact, probably the most fruity of any IPA I’ve ever had, (apart from the unique Sea Quench IPA from Dogfish Head) but do remember I have very low beer karma.) Drinks very easy, full of character, and with a not too bitter at finish at all. Tajique, NM, 7/5/19

Hands down, the best beer I had while in Albuquerque.

Look - 12 oz. cans purchased at the brewery. Hazy lemon yellow in color, with ~2 finger head and good lacing retention.
Smell - lots of tropical notes, dominated by pineapple. Good citrus presence as well, and the color and smell resembles fresh squeezed orange juice.
Taste - the edges of hoppiness are present, but overall, this is as smooth as NE IPAs get, and almost feels like drinking a pineapple-orange juice. The bitterness of the hops has just a slight bite near the end, rounded out by good wheat presence.
Feel - medium bodied, below average carbonation, and a respectable ABV at 6.8%.
Overall - this is an awesome hazy IPA from an excellent brewery in NM. incredibly easy drinking, and will easily bite you in the back with the ABV if you take it a little too easy on it...but perhaps that's a good thing.

Beer poured a turbid golden orange with a minimal head with the initial pour.

Taste is fresh fruit forward, a very nice combo of orange, mango, and pineapple. Finishes with a light touch of rind; bitterness is 5/10.

Overall a very nice tasting beer, would do again!

The smell is primarily of pineapple and grapefruit.

The taste is of pineapple and grapefruit with medium bitterness in the finish.

It has a juicy, creamy body.

A well-made brew. They took the style and put their own spin on it, and it worked out great. A little more bitterness than usual for the style lingers, but in a good way. Very easy-to-drink. A SW twist on a NE style IPA (that still stays within style). Very enjoyable! (Almost gave overall a 4.0, but I bumped it up a notch.)

This beer tastes and looks great, with the mouthfeel stepping up just a notch above that. Balanced and complex, delivering some nice citrus juiciness and dryness.

12oz can poured in Duvel tulip. Picked up from the grocery store. Typically part of a $10 six pack mixer but they rang up an individual for me for $2. Best by 09/01/19 printed on the bottom of the can. So this still has 4 months of freshness in it.

Appearance - Perhaps the most opaque beer I've ever seen. Beer is the same color as the can. Off-white head up top, and a creamy/tan orange body. Never seen an IPA that looked like this before. Decent stick and lacing. 4.5

Smell - That typical IPA grass but softer with a faint, round sweetness to it. 4.5

Mouthfeel - A bit more astringency than I was both expecting and hoping. 3.75

Overall - Enjoyable. Less than the sum of its parts. Wouldn't turn it down, but wouldn't go out of my way to buy it again. Interesting and unique, but more of a fun experiment than a 'eureka' moment on this recipe. 3.75

What a great hazy IPA. A truly excellent IPA. This beer pours with a vanilla - yellow color and a delicious citrus aroma. They say pineapple, but if so, it's very diminished. But it doesn't keep this beer back from greatness. Excellent hop profile and robust mouth feel. There is a little grapefruit to this, but it's not overwhelming.

Marble's seasonal, I think. Had to try it while I was visiting.

Pours a cloudy dirty straw color. Smell is grapefruit, lemons. Smells like a fruit stand. Taste is nice blend of fruit. No one fruit is stronger than the other. Lemons, oranges, grapefruit, cantaloupe, honeydew. This is one of the best New England IPAs that you can get in the West.

Desert Fog from Marble Brewery
Beer rating: 92 out of 100 with 25 ratings