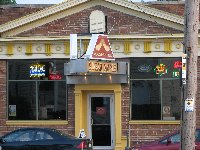 Stopped here over the weekend, and really enjoyed it.

Sign outside is huge, it's boxy form juts out directly above the glass doors in front, emblazoned with the iconic "whirly-gig" seeds from the sugar maple tree. Classy, modern interior, with show posters lining the wall and geometric art hanging behind the bar. Walls are freshly coated in mellow, muted colors. The finish on the bar was slick, the iridescent birchwood surface gave off a dull gleam.

The sixty taps are on the back wall in full view, in addition to a lengthy beer list. Focus is on regional and American craft beer. Two handpumps are in use, on the service end of the bar. Bourbon selection was also well above average. A few exclusive taps, such as the latest one-off from Tyranena, and a farmhouse ale from Lakefront. Bottled beer covered all the bases, but the focus was on the taps. A few gems on the bottle list, such as Bourbon County, Devil Dancer, and a few from Jolly Pumpkin.

Service was quick and attentive, several tastes were offered and very much appreciated. Music was great, soul and jazz mostly. Only way to go is up...this place makes Bayview somewhat of a destination, the crawl potential is there.

Came here with my wife during a recent trip to Holland, MI and Milwaukee, WI.

Beers ranged from very good to mind-blowing. Tap selection was one of the best I’ve come across in the last few years. Quirky, artsy atmosphere with awesome music (not too loud) and ample seating throughout. Service was top notch as both bartenders engaged us and they were happy to provide samples. They also made great beer recommendations. Our overall experience was incredible, and we would certainly come back. A first-rate beer bar.

An American craft beer bar that has a sleek, wood-accented bar and a relaxed atmosphere. They have sixty craft beers on tap from around the U.S. The service was friendly and helpful. I did not try any food. Highly recommended if you are in the neighborhood.

We went in the middle of the afternoon and had entire (huge) bar to ourselves. Cool classic rock on the radio and a most informative friendly barkeep. Seating on the sides if you don't want a bar stool. And 30 taps from around Wisconsin, (including the # 1,3,and 6 highest rated Wisconsin beers)and the country, 4 bottles and one can. Full service liquor bar as well as wine. Will definitely go back!

Always busy, great beer selection. Nearly impossible to get service, bartenders have ignored me and there isn't a wait staff to bring drinks to your seats. Its also always too loud to hold a conversation.

Awesome. Just awesome. Amazing selection of craft beers on tap, knowledgeable staff that is uber friendly and well versed on their selections and how things work as well as what other options are around them. On my trip here the bartender took me downstairs to see the inner workings of the tap system (awesome) and then recommended a fantastic taqueria around the corner to grab some food. 2 flights later I was so happy with the decision to come here.

Great beer selection. Lot of hipsterness going on. Not as good as Roman's or Burnhearts (IMHO), but close.

This place is great. It used to be Bay View State Bank.