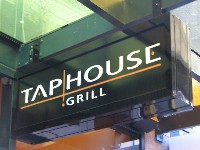 View: Place Reviews
Reviews: 33 | Ratings: 54 | Log in to view all ratings and sort
Reviews by sweethome:

Stopped in at about 5 pm on a weeknight. Downstairs bar from street level.

Rather modern - hipster look - not what I would expect for multi-tap. Sat at the bar, bartender walked up and I asked for a draft list - he obliged, but I then had to wave him down to order.

When I asked a few questions about the local IPA's, he was rather smug and cocky. When I told him I wanted to do a flight of local IPA's, he pointed to few and went off to get them.

One tasted off. I had another beer by this brewer the day before with dinner (Boundry Bay), so I knew they were a great brewery - but this IPA just tasted off - a bit sour like a bad tap line. The bartender suggested I didn't know good beer.

A guy walked up next to me and waited about 4-5 minutes for service - even though there were only 4 of us sitting at the bar. He finally left.

This was the worst experience of two days of Seattle beer sampling - mainly because of poor service and "too cool" feel of the place.

I was a late arrival into Seattle, and after getting checked into my room around King Street at midnight, my list of places of a few pints were limited. Luckily, the Tap House Grill, located near the retail heart of the city, was open until 1am, even on a plain Wednesday night. You will find the entrance and the host's table with ease, but swirl down a flight of steps and then you can let your beer imagination start flowing.

The Tap House Grill is huge! It feels like a clean lounge with a very large, winding bar, tables on tables, and additional room which included pool tables. I imagine this place can crank people and money during major sporting events. Service could handle the pockets of people there during the late night, and the bartender did offer that I pick her brain for Northwest beer. Knowing very little about the Washington state scene, I fired several choices and hoped for the best.

There could be many firings of shots here, because there are taps and more taps. 160 taps, if you're looking for a rough number. On the menu, Washington state beers are given a special indication, and during happy hour, receive a discount. Variety is not a problem here, as beers from 21st Amendment, Ghostfish, MIkkeller, To Ol, Georgetown, Elysian, Rogue, Snoqualmie, Scuttlebutt, La Trappe, Petrus, Bellevue, and Firestone are among the representatives. It leans heavy on the West Coast, with a drizzle of Belgian mystique, plus a small rotating list.

The one negative is the questionable care of the beers. I do appreciate the usage of different glassware when the time calls for it, but my first two beers didn't taste right (or maybe they're rubbish in the first place, I don't know); astringent and faded hoppines,respectively. I'll choose more carefully next time. I will say that beer number three hit it right, so at least my boozing at Tap House Grill ended on a positive.

Huge tap selection! Great place to try many different beers if you are from out of town. Great pub grub. Happy hour specials on food are a real value!

Typical sports bar, modern but no real distinct character to it. It's on the basement level so maybe would have stayed longer if it was raining out rather than being a beautiful sunny day. The private room in the back with pool tables looked cool but there was a loud group of suits doing shots of jager in there. Large selection with some rotating local brews, nothing super unique but a solid selection nonetheless. Fish tacos were good.

I visited the Tap House Grill for a beer after work yesterday. I've been here several times, and it's a convenient place with a great selection right in the middle of the downtown retail district.

The vibe of the place is very hotel-lounge; kind of a corporate attempt at trendy-but-warm. It doesn't bother me too much, and service was quick and friendly despite it being a relatively busy after-work hour.

160 taps means a huge selection. Most of the regular offerings are widely available, but it's nice to have them all in one place. 20 or so rotating taps have a pretty good selection of rare and interesting stuff, though. My only real issue is that it is a bit overpriced, though this may be due to location. $6.50 for a pint of non-rare or special brew is a bit steep, even for this neighborhood.

It's like a local version of Yard House with a large selection and a large space. The difference is that there are pool tables available for hourly rates. I didn't play but asked about them. And I agree with others that the service can be slow when crowded since there was only 1 bartender for both a large bar and dining room service. Only had the soup which was quite good. Bottom line - I wouldn't hesitate to go back next time I'm in Seattle.

Visited Seattle in 2010 and stopped here several times, it was across the street from my hotel. I remember a huge selection of beer, at the time I was a newb, but there was lots of Pacific NW beer represented. You can build your own flights, which was cool. I sampled several beers in my trips. The place is very large and the food is good from what I can remember. It is in a great location, so if you are close I would stop by