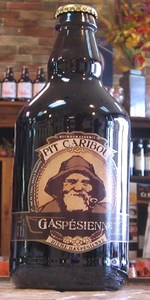 Picked up right near the brewery on a trip to Gaspesie. There is a spot on the side of the label for a freshness date but it hasn't been marked, though I'd assume this one is pretty fresh; it's prominently on display at most stores in the area where beer is sold. The Gaspesie region seems to hold a definite appreciation of local products; this porter is also made with Gaspesie barley. Opaque black body topped with a good looking finger of beige head, which recedes a minute later to a faint covering, leaving some lacing.

On the nose: lots of toasty, wheaty cracker, minerals, light molasses, dark malt, mildly lactic, a touch of earthy hops. Smells nice but could be stronger.

All that toasty wheat translates to the flavour as well, though it's more balanced here than in the nose. Nice mineral presence along with light roast malt, a touch of coffee and quite a lot of powdery dark chocolate. Light earthy hops join in on the finish, leaving some drying and lingering cocoa. The extra alcohol isn't perceptible.

Fine medium body though most likely over-carbonated a little.

This beer should have had an especially hard time impressing as I recently reviewed two of the most respected American porters (Edmund Fitzgerald and Black Butte) but it definitely holds its own. I wouldn't put it up there amongst them but it is definitely a well-made and very drinkable porter worth checking out (especially if porter is your thing). If I lived here in the Gaspesie (I wish) I'd definitely be drinking a bunch of this stuff. I had a chance to sample a flight of Pit Caribou's four regulars and this was by far the best one in my opinion; I was also served a pint on nitro-tap (odd for a porter) and didn't think it suited the beer. Bottle was definitely best.

A: Poured from the bottle into a tulip glass. The beer is a pure blackish brown color with no light coming through. Head was brownish tan, frothy, and stuck around a while.

S: The beer has a nice, chocolatey malt aroma with hints of roasted coffee and molasses. Solid smelling beer.

T: Chocolate, a hint of milky sweetness and creaminess. Nice roasted character in the finish. Not so many different tasting notes, but what is there is really good. Straightforward, but that's not a bad thing. Does one thing very well.

Overall: This was a surprise for me. I wasn't expecting this much flavor from a beer found at the grocery store, but I'm glad I picked this up. A really solid choice for my 700th beer!

Very roasted with coffee, smoke, dark chocolate, nuts, and toffee prominent in taste. Smell is a nutty and heavily roasted espresso. Feel is decently carbonated, creamy and all around medium bodied. Solid porter

Poured from a 500ml glass into a Speiglau stout glass.

Pour is a deep dark black with a cafe au lait head.

Aroma is astringent malt with a slight roastiness.

Taste is a lot of roast with a sweet milkiness, body is a little thin.

Delicious and drinkable! This one is a big surprise, but the precise amount of hops to complement the thick malty flavour. Win!

Appearance - Pours black with 2 fingers of beige head, head dies down in a couple mins leaving a thin film over top

Mouth feel - Light-medium bodied, carbonation is prickly, but not overwelmingly so. almost feels like pop rocks on the tongue.

Overall - Not a bad beer at all, My first porter so I cant really comment on the style yet. It was lighter than the stouts I tried but im guessing thats how its supposed to be, from what ive heard.

Notes: Black with a deep mahogany brown edge. Roasty, black coffee aroma. Coffee and caramel in the flavor with soft, berry-like fruit. Moderate bitterness. Dry, ashy finish. No hops. Light/medium body. Overcarbonated - does not appear to have any lees, so it must have been bottled as such. Conclusion: pleasant. Not overly roasty. With the exception of the carbonation level it's quite nice.

T- roasted malt/nuts, touch of coffee, dark chocolate notes, brown sugar, also quite fruity with flavors of dried dark fruits. Nice caramel sweetness. Finish is drying with more flavors of burnt caramel and roasted malts. Hops are have a slight presence and do add a touch of bitterness ( Fuggles maybe? ).

M- the carbonation works well in this beer. The body is a tad on the lighter side of medium.

D- drink-ability is high in this brew. I tend to not drink many porters/stouts in the warmer months but this brew goes quite well with a cool breeze and color-full sunset or even better, a campfire.

Overall the body of this beer was the only turn off. Just to far on the lighter side of things. other than that i enjoyed the flavors that this brew brought to the table.

A:
Pours a perfect black with a nice tan heady that slowly goes from a couple inches to a quarter-inch and then a bit around the rim with a tad of lacing.

S:
Overall not very in your face smell-wise. Some hints of unripe pear and "earthy" spices (tumeric, cumin).

T:
Tastes nice and balanced; not sweet and doesn't taste like nothing but espresso, so that is a good sign in my book. Taste almost reminds me of jerky or smoked meat.

M:
Nice round mouthfeel. Earthy with almost a citrus feel up front--really fresh tasting for something so black-- then creamy and sweet with a long smooth finish.

O:
Overall this was a very enjoyable beer. It looked nice, smelled good (could have been more fragrant, though), and was really nicely balanced. I felt like the hop flavor was just there enough from making it suffocating. Pretty drinkable for a porter in that respect, actually.

I'd definitely have it again!