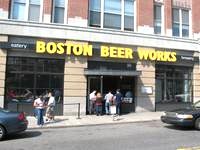 Notes: Beers are brewed at / by another brewery. This location no longer brews its own beer. Kegs are shipped from one location in Lowell, MA.
BEER STATS

So I wondered around Fenway Park with fellow So. Cal. BA xlperro, because some kinda famous sporting stadium is around here somewhere allegedly. We wondered around and verbally sparred with the Ticket Touts, and joined the Tourists. Then the Boston Beer Works, which lies opposite one of the corners, opened at 11:30am. Hell Yeah.

As the first customers of the day, we were greeted by a very friendly bartender who was performing his duties and filling up the coolers whilst chatting with us. The most amazing thing throughout the visit was the old spices smell from the batch of the Pumpkin Ale that was being brewed whilst we were there, the Brewster was busy clambering up and down the Brewery which lies to your immediate right as you enter, and occasionally disappearing into copper vessels to empty the mash tun. The odors that permeated the air were gorgeous and just to die for.

Similar in decor style to the North Station, there are two bars at the Fenway Park outlet, one to your left in front as you enter, which is the bar that myself and xlperro stayed at, whilst up a level and at the back end of the long room that forms the Boston Beer Works, there is a larger bar on the right hand side which starts where the on-site brewery finishes.

The beer range is quite astounding, given that this is BrewPub. So often you get the standard Wheat, Lager, Stout, Red and Brown. Not here!! There is a vast range of quality brews that will please most palates, including 2 beers on Cask  a nice touch. I tried the Curlys Stout, Back Bay IPA and the Watermelon Ale during my visit  all were excellent. I was also very impressed with the Allston Mild that xlperro had  a MILD!! Shock, Horror, a Mild in America!  But you know what it, it was damn good. Top Marks have to be given to Boston Beer Works for their creativity in producing some quality beers that are out-of-the-norm.

Xlperro grabbed a half-plate of Nachos, when it arrived, it was large, & I mean large  large enough to feed to the entire continent of Africa. Even despite our best efforts, we could not clear the plate. Make sure you are hungry if you eat here.

A very nice BrewPub, that has an amazingly creative array of Brews (which is why I give it a 5.0), all of high quality, and even two of them on Cask, what more can you ask for? Well worth a visit. Oh yeah, and maybe even worth popping in after you have been to the scruffy looking old brick triangle over the road.

Sprawling brewpub/ sports bar around the corner from the ballpark. Multiple bars a communial table throughout. 3 different game playing while I was there... ergo very rowdy. Nice assortment of 20 beers on tap, the one I had was solid. Good service, did not try the food - looked to be typical bar fare.

I was here after a terrific Red Sox game that had them come back to score three in the ninth to beat the Cards. Needless to say the atmosphere was pumped up.

I thought the service was good considering the crowds. My bartender was able to make a recommendation for one of my party who was looking for something specific.

My beers were fresh and I thought well made. I had a hoppy red and nice stout. Prices were good considering the location.

This was a large sleek space. I liked how it wasn’t really a traditional brewpub.

I will head back next time I am near Fenway!

Standard, Granite City like brewery & restaurant. Convenient that it's right next to Fenway Park.

Classic place. Very crowded before Sox games, but definitely a better spot than some of the other places around Fenway, which can be tourist trappy. Solid pub food. Prices are decent for a "captive audience" type spot. You'll always find a fun new beer on tap here, too.