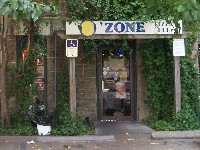 Great place to go no matter who you are. Hipsters, families with children, singles, yuppies, hippies, everyone goes to Ozone and why? Because the pizza is good, drinks are plenty and who wouldn't want to eat in a renovated hospital morgue? Yep, Ozone is located in the basement (morgue) of the old Sacred Heart Hospital. No worries though, it's not been used as such for a very long time.
Ozone was one of the first places in town to get Guinness on tap and was a smoke free restaurant before it was legally mandated. They have a good beer selection and yummy pizza. It is a cool joint.

Ozone is tucked away within the basement of an old mental hospital. The building is haunted they say which creates wonderful stories from the staff. This basement Restaurant and bar is picturesque, they have many taps behind the bar and they serve pitchers (many places in Pensacola no longer do this.) Their pizza's are inventive and delicious. They change their taps out occasionally and always keep in many micro and craft brew's. They have many specials such as $1.oo a slice at lunch and many other great ploys to get me in their establishment. Definitely a must do in pensacola.

Pensacola has precious few establishments that serve any variety of beer, and upon hearing that the O'Zone featured not only craft beer but good pizza, I immediately planned a visit. The place is located in the historical old Sacred Heart Hospital on 12 Avenue, sandwiched between a deli and a restaurant apparently all owned and operated by the same person. On the ground floor of the big stone building, one must walk downstairs to enter, giving the place a kind of secluded pub atmosphere. Inside, it's cozy and casual, with a long bar in the entry room along with several tables. Two adjoining rooms add additional table space and a chance to spread out.

On tap are about 15 brews including several regional offerings such as Sweetwater (Atlanta) and Magnolia Brewing (Mississippi). Also on hand are about 45 bottled beers with a focus on import and craft beers. "We don't have many lights," the friendly waitress told us. And friendly is the watchword here. All the staff seemed quite friendly and willing to answer my numerous questions. Also, our waitress was knowledgeable enough about beer styles to make some good recommendations. I had a Magnolia pecan ale, and my wife had a Hoegaarden.

The food did not disappoint. The cuisine is Italian, and the pizzas and calzones we ordered for the kids and us were excellent. Pricing was quite reasonable as well. In all, a good place for an outing with the family or for a bite of lunch.

I haven't visited at night, but I hear that the crowd is a bit different, and things can get rowdy especially if a band is playing such as on Tuesday nights. Posters advertising local and regional bands are plastered everywhere and there's a small stage for performances. I've also heard that it gets crowded on Friday and Saturday nights, so be prepared for longer-than-normal waits.

As an added bonus, I ran into McGuire's brewmaster at the bar. He was hanging out enjoying some beer himself; the fact that he hangs out at O'Zone is an endorsement in my book.

In all, O'Zone is a great stop to get a good pizza and some good beer. It doesn't have the selection of HopJack's or the Brewpub cachet of McGuire's, but it's a great place to chill with a good beer in hand.