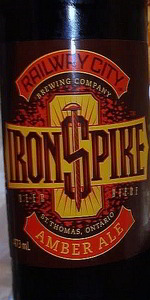 Notes: A deep garnet, Iron Spike Amber pours a dense frothy beige cap with good lacing and retention. To the nose, toasted notes of dark bread and caramel malts as well as deeply rooted dark fruits give way to a perfume of bubblegum, banana, and yeasty esters.

The flavour profile is initially sweet with dark fruit and caramel. This leads to toasted and spicy flavours with a hint of smoke and fall fruits while the hops come through to balance the sweetness. This full-bodied amber ale is an ideal balance of creamy grainy fruitiness, and sharp hops bitterness.

Iron Spike Amber looks like your standard amber ale, albeit with a suntan. Slightly darker in colour, this beer maintains every bit the sparkling clarity of an offering twice as light. Its beige head, initially quite substantial, fades all but entirely, leaving no evidence of its existence.

The aroma smells of all kinds of dried fruits but none more so than raisin and banana. It's not entirely out of character for an amber ale but it's not exactly ideal either; malt and/or hops should feature more heavily than this. The butterscotch-type notes are almost diacetyl-like.

Iron Spike Amber is designed for just about everybody - that is, except for craft drinkers that are accustomed to more characterful examples. While not unsubstantial, the beer doesn't have much lasting power and fails to ever make much of an impression. There's little expression of any dark malt and even less so any hoppiness. There aught to be more flavour than this.

Ambers ale tend to be either exceedingly malty or hoppy and, as stated, this edition isn't particularly either. It's very underwhelming. There's strong indications of dried fruits (like those in the aroma) and traces of butterscotch or bread pudding; it's fruity with a slightly bitter and toffee-ish edge. It seems like something modeled after an English Bitter.

Iron Spike Amber is an everyday dark ale that's designed for casual and average beer drinkers. Unfortunately, I, personally, don't share that fondness for simple refreshment and lighthearted flavour; for me this ultra-restrained style offers little to enjoy it by. If I'm to take a walk on the light side I'll opt for something golden - not amber. An alright beer, but not for me.

Another bottle from the brewery, best before March 31 2015. This batch seems much nicer than the two bottles I bought a couple of years ago, which I suspect were off, so I am heavily editing my old review and adjusting the scores accordingly. Served well-chilled.

Pours a lovely ruby-amber colour; deep in hue but still clear, topped with two fingers of soapy, off-white head that hangs together for a few minutes, eventually settling into a thin cap and collar. Great lacing; looks much enticing this time 'round. Mild aroma with notes of butterscotch, pears, plums, apples, and maybe some other orchard fruits - enjoyable enough, with a sweeter caramel malt kick than I remember last time. It's to-style, but still a little cloying.

The malt backbone is light and doughy, with some pronounced caramel sweetness. It's followed up by some orchard fruit and raisin notes. The floral, leafy hops of the finish do not entirely counter the sweet nature of earlier flavours. Nutty toffee makes it through into the aftertaste, along with a mild bittersweetness that lingers briefly. Light-bodied, with minimal carbonation for a smooth, slick feel going down the gullet. This beer isn't blowing me away, but it's very easy to drink.

Final Grade: 3.46, a passable B-. It has now been at least a few years since I last tried Iron Spike Amber, but I must say that I am considerably more impressed with it this time. It's a serviceable amber beer, and like their Blonde Ale would probably make a nice gateway craft brew for fans of Rickard's and the like. I'd drink it again, and I'd probably buy it again if they get those cans into the LCBO some day.

Had this on tap at The Rebel House in Toronto. Pours a clear amber colour with very thin off-white head. The head dissipates rather quickly without any lacing. Smells of sweet caramel malt. Flavour has a bit of an odd aftertaste, but it is mostly sweet and inoffensive. Thin mouthfeel.

Growler from the brewery:

Pours a clear dark amber-red with a modest white cap.

Aroma: plumb-apricot with some toastiness and grassy tones.

Plastic bottle fresh, enjoyed a the brewery. The boldest taste of their three starting beers. A crowning head, a bit of lace. Nicely carbonated and the mst colour of their three. Like a mild red ale in colour and taste. A richer malted taste. Average or less mouthfeel.

Decants from the growler, a very dark mahogany liquid with deep ruby around the edges. Billowing, off white, fluffy cap appears and lasts. The nose is dark fruit and cookie dough, with burnt sugars and caramel with a nice spice contingent. Tastes of sweet doughy malts, floral spices, bubblegum, and banana. Creamy, medium bodied. This beats all of the other "amber" beers available in this area, hands down. An amber with flavour, body and character. Well done.