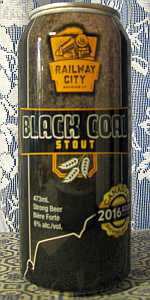 Notes: This medium to full body stout is Railway City’s signature dark ale: introduced with a deep brown hue, the stout pours a thick and frothy dark chestnut coloured head. The nose is dominated by coffee and toasted characteristics with underlying tones of rich dark chocolate. On the palate the stout begins with bitter-sweet chocolate leading into elegant toasted notes reminiscent of coffee and a slight undertone of freshly baked rye bread.
View: Beers | Place Reviews
Reviews: 20 | Ratings: 71 | Log in to view all ratings and sort
Reviews by andrenaline:

Dark with a good looking head. Some spotty lace, not a ton. Smells dusty and smoky, proper for a stout. Lots of licorice to taste, some smoke, but oddly sweet somehow. Not quite what I was expecting that way. Thin bodied, slightly drying. Passably good, but for the odd sweetness.

Ok drinkability, possibly one of the better ones I have had from this brewery. Decent amount of smoke to make it interesting. A bit thin mouthfeel. Lots of licorice in the finish, hazelnut like flavouring. Bottle at Stouts Irish Pub in Toronto. Black without visible head.

While it's a respectable brew, the problem is that the appearance (dark, nice head, very sharp poured into the pint glass) and the smell (lots of chocolate, coffee, caramel) set up expectations that the taste can't deliver on: it's not bad, just quite light in flavour, and a bit watery in feel.

500 mL bottle from the brewery; best before Feb 7 2013. I enjoyed the sample I had while visiting, and decided to pick up a few bottles of this before I left. I don't think this is the first year they've brewed this particular stout (since it has apparently won a Silver Medal in something-or-other), but apparently I'm the first BA to review it.

Pouring black as night, this one handily earns its 'black coal' nickname with an opaque black hue and two fingers' worth of dense, foamy brown head at the surface. It gradually dies down over a period of minutes, coating the glass with webs of lacing. The aroma is full of rich roasted malt character, with baker's chocolate, mocha and burnt coffee grind notes. Not particularly complex or anything, but the aroma is powerful and intense, which is enough to say it does its job well and has me eager to sip.

Very tasty stuff, with lots of roasted grains and nuts at first, followed by dark chocolate and spent coffee grinds. A slight twinge of dark cherries toward the finish, but this is quickly scrubbed away by the roasted coffee flavours in the finish. Slightly herbal - perhaps with shades of anise - and a roasty, malty aftertaste that lingers on the palate. Medium-bodied, pretty creamy, with mild carbonation that gently prickles the tongue and leaves the mouthfeel of this stuff supremely smooth. Very drinkable, even at 6%; I could definitely have a few of these in a night. Black Coal Stout is probably the best beer that Railway City brews, at least judging from my own experience - so it's a bit of a shame this stuff probably won't see distribution nearly as wide as their Dead Elephant or Blonde any time soon.

Another can, dated from earlier this month. Despite my original pessimism, this has now been available in LCBOs for at least 2 years. I still feel that it's a solid stout, but my enthusiasm has wavered a bit recently - the roasted malts are a bit lacking in intensity, and overall this beer doesn't really impress me as much as it used to. Good, not great - but certainly worth a look, at least.

One of their better beers for sure.

Coffee, smoke, chocolate, dark malts, a hint of sweetness and bitterness. Seems to be missing something though, not much body here.

Got this one at the LCBO in Toronto this past summer.

From a can into a pint glass

APPEARANCE: Clear black pour yields a 3+ finger, medium-looser looking, foamy, light tan head with half decent retention. Swiss cheese head pops and fizzes down to a foamy cap with foamy lacing on the glass. Clear black body with no real carbonation evident. A half wisp remains leaving touches of lacing on the glass. Lousy head on this one but the body is alright.

TASTE: Roasted barley with burnt and charred flavors up front. Medium strength with more flavor at the swallow. Burnt malts, leather, tobacco, bitter burnt coffee and some sweet cream linger on the palate. Pretty flavorful after the swallow.

PALATE: Slightly thinner body and higher levels of carbonation. Light on the palate, a bit foamy perhaps, goes down fine and finishes a bit mouth-coating. Too light and foamy for the style, but creamy enough.

OVERALL: Okay, and the name Black Coal fits the bill here as well. The look and feel could use some work but the base recipe is solid. Good aroma and the flavor works well, especially after the swallow. Well worth checking out if you get the chance, and I’ll definitely be on the look out for another batch when I’m home again in July. Cheers!

Poured from a standard 473 ml Canadian pint can. Bitterness prevails with this stout and I liked it. The flavor made me think of dark unsweetened chocolate or even mocha. It's quite black in appearance, as the name implies. I'd seek it out again.

From notes taken last week while on tap at "The Kick-Off" in Waterloo. Remember enjoying it last year and possibly also the year before, but not sure how long Railway City has been brewing this seasonal.

The aroma is excellent. Coffee is the predominant note, with enough roasted malts to be interesting. A complex malt-forward flavour, both roasted and toasted, with chocolate and coffee elements. Another positive is that this pint has no discernible diacetyl, which seems to be a struggle for this brewery.

An excellent Ontario dry stout that I'd highly recommend.

I bought a can of this from the beer store in Brantford whilst in Canada for my son's hockey tournament. It poured an opaque black with tan head that is leaving a spotty lace. The scent is roast and slight espresso. The taste is nicely balanced and easy to drink. There was coffee and slight touch of chocolate. The Mouthfeel was lighter in body with good carbonation. Overall it's a solid stout.

Absolutely beautiful color. If you're looking for a stout you really can't go wrong with this one. As for taste I can pick up notes of coffee mixed with chocolate. Really a must try for people who like stout.