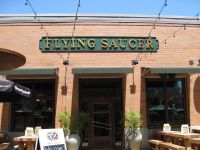 View: Place Reviews
Reviews: 24 | Ratings: 54 | Log in to view all ratings and sort
Reviews by woodychandler:

Tucked away in The Triangle mini-mall on West 47th Street off of Lamar Boulevard, the building was semi-circular with a good bit of patio seating behind a short concrete wall on the left facing side of the building. The fire exit was on the side of the parking area, so I had to transit around and to the left to enter. Coming in through the short vestibule, the snaking, sea-green concrete-topped bar was directly in front of me. Once more, a wall of pennies embedded into the wall and sealed with acrylic served as the basis for the back bar, which was the line of taps. Shelves of glassware and bottles sat above the back bar with a huge chalkboard center. Two two-doored coolers flanked either side of the wall of taps with the kitchen to the extreme left, followed by an archway that led to the lavs. Not as many plates in the overhead as at other places that I have visited, but on the other hand, lots of Frisbees were on display. Standard restaurant tables and chairs in the bar area, followed by more of the same, along with the big, comfy chairs, leather sofas and booths in the restaurant area. As usual, the waitstaff was a major attraction (unless you are dead). My server was Teddy (not AM SERVER as my check later read).