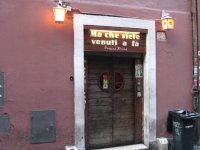 View: Place Reviews
Reviews: 34 | Ratings: 58 | Log in to view all ratings and sort
Reviews by Beervana:

I sat and drank €5 pints of Cantillon for 2 hours while snacking on pastries. What else do you need to know? If in Rome, come here. The place is small and narrow, as most bars in the city are, but they have about 12 taps of great beer, you really cant go wrong.

This place is awesome! Amazing beer bar that is a must stop in Rome. Met the head brewer of Cantillion here by happen stance. He was in town for a beer event at Another local craft beer haunt. Anyways, they have a small yet very well chosen draft list including draft pours of Cantillion. Huge selection of sour bewers in large and small format bottles. Very small place fits 25 to 30 people which feels slightly crowded, but its cool to stand outside and drink your beer in the alley. Which is a fun novelty for me since we can't walk in the streets with a beer in America.

Better selection than Bir & Fid across the street but smaller and more hipster vibe. Check out both.

Without a doubt, this is the best craft beer bar in Rome! I visited Ma Che every night during my recent week long stay in Rome and each time it was fantastic. Ma Che has this very cool "locals/homey" vibe ... a casual and friendly place to hang out and drink outstanding beers. Even though I was a tourist, I always felt welcomed at Ma Che.

The front bar area is a bit small ... but make sure you go to the back room as it's typically uncrowded with a decent amount of space to spread out a bit. Or better yet, stand outside and drink on the streets of Trastevere like the locals do.

The tap list here is world class ... between 15 to 20 beers on draft, mainly Italian selections - which are fantastic, Italy is producing high quality craft beers, do not miss! There's also a very good amount of bottled selections. I was particularly fond of the 750ml and 375ml bottle of Cantillon ... plenty of different Cantillon bottles available at very good prices (10 euro for 375ml & 20 euro for 750ml). Pricing at Ma Che is very reasonable ... you would pay more for the same in larger US cities like NYC, Chicago, LA, etc.

Crowd there is a mix ... I'd say 80% locals and 20% tourists. Everyone including the staff is super friendly. Atmosphere is just chill ... not a meat market or a douche hipster hangout. Ma Che is one of the best craft beer bars in the WORLD ... highly recommend - do not miss!!!

I came here after having a few at Bir & Fud, only steps away. There was a line to get in and people drinking outside in plastic outside. (Gotta love public drinking, a novelty and priveledge unavailable to Americans) surprisingly the line moved and I was able to get a seat at the tiny bar. Apparently there is more of a sports pub space in the back but I didn't look.
Just like that the crowd died down, only to return much later. I was able to have two Cantillons, chat with the staff, and made friends and conversation with people sitting around me. Cool hang with a great selection. Someday I hope to visit Rome again and stop by this place,

Really cool place. It seems small at first, but there is additional seating downstairs. The beer selection is solid and the servers are friendly. However, I ran into a problem when trying to order from their bottle list. They had a Vintage 2002 on the menu. I tried to order that. They said OK. Then they come back and say, "No. Sorry. We only have one. We can't sell it to you. But we have this St. Valentijn Cuvée from 2004." The label on the bottle was completely tore up, so I couldn't verify the year, but I'm also pretty sure they only made that in 2007. I bought it anyway, because it was at least something. But then later I tried to order a bottle of Millennium Geuze. "No. Sorry. Only one bottle left. Maybe if you come back tomorrow." ....what? Whatever. I'd still go back, but that was weird.

Excellent spot to visit in Rome! Across the street from Bir and Fud (another great spot with good food by same owner) and has a great selection of excellent beers from Italy and beyond! Had an amazing Italian IPA, Cantillon Geuze and a stellar Italian sour and enjoyed the chill vibe and atmosphere. Would recommend to any craft beer fan visiting Rome!

Nice location within easy walking distance of much of the center city, shuttle dropoffs, and tourist locations. Friendly servers who can cope with English speakers. Great gelato & pizza nearby. My favorite afternoon hangout in Rome!

The jewel in my visit to Rome. This is what any beer bar should be about, like Fermonteren in Copenhagen. Great selection of well kept beers with a lot of locals showcased. Paulo the bar man was a fountain of knowledge, happy to produce small tasters and explain the beers and breweries really well. Nice proper decor, not over stylised. This bar should be on everybodies itinerary when visiting Rome.

I was glad to able to stop by for beers while in Rome.

You enter into a small barroom and there is another small room in back. The overflow (and smokers) occupy the street outside the bar. It’s decorated with some sports & beer memorabilia and had a few TVs.

The two bartenders were great. They were able to offer recommendations to my party and were very friendly to boot. The crowd was friendly and even ran into some American Football fans to chat with.

I think they had 14 draft choices and some cask beer plus a large bottle selection. I was glad to have a tasty IPA and some draft Cantillion during my visit.

I don’t think they offer food, but there are a ton of good options nearby including their sister Bir & Fud across the street.

Try and stop by if you ever visit this great city!

The name "Ma Che Siete Venuti a Fa" comes from a football chant that literally translates to "But you came to Fa", and more roughly means to say to the opposing team something along the lines of "Why the hell did you even come here?".

With that said, it's a sports bar, but it's not overloaded with team memorabilia or anything like that, and actually has a very nice, polished look. It's mainly wood and stone, with a dark wood floor and a dark wood ceiling and a painted-white wood bartop. It's small but comfortable unless it gets crowded, which it will. The small bar has 6 seats, and there are another 7 along the opposite wall. There's another small room at the back with 28 seats along 3 tall long tables, and a barrel that's been converted into a table (which, I believe is a promo item from a brewery as I've seen them elsewhere). When it's crowded there will be a large group of guys hanging out right out front, giving everyone a little more room to get to the bar.

It's located just across Via di Benedetta from Bir & Fud and Birreria Trilussa. I'd arrived in the area a little early and Trilussa wasn't even open yet. The bartender was very friendly and spoke English very well. Even at that early hour they had a few customers whereas Bir & Fud sat empty, and that continued throughout the night. After my next stop at Bir & Fud there was already a crowd of guys hanging out front enjoying their beers, which leads me to the beers...

There are 13 taps, 4 small coolers for bottles, and 3 hand pumps which occasionally actually pour cask-conditioned beer (normally it's just standard beer with a lower carbonation level that might or might not be unfiltered or just partially filtered). Not knowing the beer scene I can't say exactly how good the line-up is, but I found it fairly impressive with several IPAs, a Gosebier, a Baltic porter, and at least one sour. They offer a mix of Italian, German, English, Scottish, and Scandinavian beers.

Ma Che Siete Venuti A Fa was one of my favorite stops in Rome, and I'm only disappointed that I didn't get to see it while a game was on. I'd highly recommend it, especially as there are two other bars/eateries nearby.

Truly an amazing hole-in-the-wall. The selection on tap has minor changes every week, but always includes a lot of high quality Italian craft beers - Porters, Stouts, Sours, and Saisons seem to always be out in full force. Additionally, the bottled beer selection is phenomenal. Almost all types of available Cantillon brews are here, and occasionally they're on tap too. Lots of expensive Geuzes and Sours from around the world. And a serious mix of everything in between.

Small, cramped bar (maybe 8-10 seats, with another 6-8 facing the wall). A few tables in the back. At night time there will be at least 20 or 30 people standing around outside with their beers. The staff knows beer, and the owners also manage Bir & Fud across the street. These are the two places everyone must stop at in Rome if they like beer.