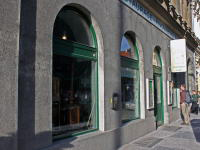 View: Place Reviews
Reviews: 21 | Ratings: 37 | Log in to view all ratings and sort
Reviews by Beervana:

cozy and local ambiance. some belgians and lots of czech beers are available. foods are really delicious. one of the most cheapest places in town. recommend.

whiskeyandrecords from District of Columbia

Literally, this one of my favorite places in the world. Not favorite bars in the world... favorite PLACES.
The beer they have on tap is all VERY local and VERY delicious. After you get through the draught selection, you can sample their massive varieties of bottles. The food is classic, rustic Bohemian cuisine. Although nothing particularly special, it pairs amazingly well with the beer. If you're a beer lover in Prauge... or central Europe for that matter... Pivovarsky Klub is an absolute must.

Small and modern, not what you'd expect from a city this old. I don't know if it was that I hadn't had a beer in a few days, or this place was very comfortable, but I enjoyed myself quite a bit. Six choices on taps, lots of bottles. If you expect chatty, overly attentive service, you won't get it here. That said, my glass never went empty and the bar staff was good with suggestions. Even though I missed the conversation I typically have with my server, this wasn't bad. The service was stoic, but not sullen. The food was pretty good, too. I had the pork knuckles (with sauerkraut and dumplings), and for about $10 US, I got a filling, very tasty meal.

Second time here, and definitely a must stop in Prague. Food was great, and so was the service; my wife asks a lot of questions about food, and the waiter answered all of them and even offered better suggestions.

The beer on tap was great, in particular the Herold dark Lager. A must when in Prague.

Reviewed from my notes of when I was in Prague. Nice bar, 6 taps of all great beer, with soooo many bottles I can't even tell how many. A bunch of different fridges lined with beers, hundreds of bottles perhaps, the top of the entire place is lined with empty bottles of various kinds, dried hops, almost like a bottle museum, and some brewing equipment in there, as well as books to read on beer, and more. The bartender was pretty well knowledged and friendly. I got the smoked ostrich which was really interesting and pretty tasty, the sourdough bread was awesome too.

Ok... last review of the 2013 trip... Alewife and I took a day-trip to Plzen on 04OCt13 for some suds and sights.... Upon returning, we made the walk from the train station to Klub for some biers before going out for dinner... A bit out of the way, in a drab looking area of town...

A grey concrete building with green-trimmed, arched windows was found and allowed us entry... Straight in and we encountered walls ahead and to the right with shelves and shelves lined with biers and biers (and a few glasses!). On the left was a small bar and a couple of long tables. To the right were some smaller tables and chairs. We parked at one of the long tables left. The bar had 6 draft biers; I tried a Falkenštejn 14° Tmavý Speciál, Alewife a hefeweizen type brew. Mine was good; Alewifes fair... While quaffing I perused the shelves. Shitloads of bottles were available for either in-house imbibing or take-away. A Primator 24° caught my eye, and I tried that next. Damn good! Had another, and Alewife opted to do the same. Even bought a couple for take-away (and brought safely home). Solid, English-speaking service behind the bar was much appreciated. The biers available in bottles were extensive... loads and loads.... I wish I knew more about Czech stuff. There's also a downstairs, which had its own bar and lots of tables in a warm, brick-lined setting. This is a real nice place, and I wish it were closer to the downtown action. Still, it was still only a leisurely, 30 minute walk back to our apartment. Would def return if/when I'm back.... Prosit!!

After being stuck close to my hotel for 5 days due to business, was able to venture out a bit further on my only day off.

As reported in other posts, establishment has 6 taps. Pours available today included 1 each from Belgium, Denmark, and Germany as well as 3 from the Czech Republic. All 3 domestics were micros including a beer brewed on the premises. Sampled the Czech suds and Danish beer. The micros were unlike typical Czech pilsners.

Food was typical hearty Czech dish (goulash) but less "khaki" in color (and flavor) than other traditional grub I have sampled here.

The gem of Prague for BAs. decent size two story bar with the best beer store included that I found in Prague. They have mostly local, regional on tap and about 10 draft selections. i didn't realize czech had so much craft beer until I went there. They also had a decent bottle selection to chose from. Food was way above avg for czech pub cuisine. My wife enjoyed it too because they had some belgian sours and lambics that she likes. overall, this is the bar you need to put first on your list. it wasnt over smokey and the service was really good too.

Having read about this bar before a recent trip to Prague, I decided that it was a must see for any beer lover. I was not disappointed....

A little hard to find and an unassuming exterior. Pivovarsky Klub has 2 levels: a bar/bottle shop on the ground floor and a cellar bar beneath, where I went to have a meal and a couple of brews.The bottle selection wasn't unlimited but featured plenty of uncommon Czech beers and a good selection of Belgian brews. German beers were also represented, and a smattering of other countries. There are 6 taps with rotating beers and a large bottle menu. The food menu isn't vast, but features a range of Czech classics.

It was pretty quiet when I went - I don't know if this is typical for a Sunday evening. The staff were young and friendly, although their grasp of English seemed a bit patchy. I had soup followed by pork knuckle & sourkraut - perfectly decent food but both of these dishes arrived rather promptly and gave the impression of having been sat in the kitchen waiting for a customer. Perhaps that was just because it wasn't busy, but it dispelled the illusion of freshly prepared food. The beer was better - I sampled 2 from the selection on tap: an unfiltered lager from Pivovarský dům and a honey/smoked malt beer (I forget which brewery). Both were delicious.

I thought the pricing for food and beers on tap was very reasonable, particularly for a capital city. Great value by the standards of most places. Some of the imported offerings in the menu were quite pricy - for example they had a couple of Brewdog bottles that were about £4-5 (much more expensive than here in the UK, but that's imports for you).

Overall, a great place to sample some interesting beers that aren't available elsewhere. The bottle selection is also pretty good, especially if you're looking for Czech beers. Definitely worth paying a visit if you're in Prague.

Pivovarský Klub in Praha, Czech Republic
Place rating: 4.43 out of 5 with 37 ratings