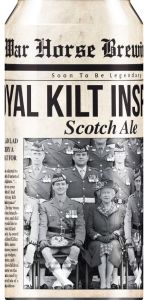 Notes: Classic and approachable style with notes of caramel, malty, toffee goodness. Dark but not heavy.
View: Beers | Place Reviews
Reviews: 12 | Ratings: 43 | Log in to view all ratings and sort

Pours a deep amber. Malty aroma. Light foam. A light roasted malt body. Not too heavy. Smooth. Slight bitter roasted malt finish. Not much of a hop profile to speak of. A pretty good scotch ale.

This is sold as a Scotch Ale / Wee Heavy but fails at that.

The alcohol taste is ok but almost tastes like added alcohol on a fake way, but it's only 7% & I tend to like strong beers.

The malt is reasonably good but not exceptional for a Scottish ale.

The hops are completely inadequate and ruin the flavor. After purchase, I see that it only lists 14 IBUs: Scotch ales are generally 2.5-4x that. The hops didn't taste clearly British Isles variety as a Scotch ale should, but that could be partially on the lack of hops.

I recently wrapped up a major undertaking with Terrapin in support of The CANQuest (tm) & before I begin CANother deep delve into a brewery, I am going to make a short detour. Not to worry, I have plenty pf CANs of beers to follow. This is just a lucky score, thanks to Hunger-N-Thirst. These next two actually make me happy as BOTH of my late-grandfathers were WWI veterans! Q: What did PapPap Kirsch (maternal), John Dos Passos & e. e. cummings have in common? A: They were all ambulance drivers! 8=O Q: What was special about PapPap ChANdler's service? A: He was one of the last mounted cavalrymen, to which the brewery's name alludes! Imagine the shot profile of a mounted horseman in trench warfare … OMFG. The fact that both survived (PapPap Kirsch had several bunkmates, one above & two across, die of Spanish Flu during Boot Camp), had children & had their children meet, marry & procreate to produce me is an unending source of amazement.

From the CAN: "War Horse Brewing Co. Geneva, NY September 13, 1944 Soon to be Legendary"; "Royal Kilt Inspector Scotch Ale"; "Tartan-Clad Lad Gives Jerry a Right What For"; "MacPherson was selected train and lead a pack of untested French Resistance Fighters. ' … your only authority was your own personality, which I had tried to reinforce with my kilt and a degree of flamboyance' said MacPherson. The tiny team dangled grenades from branches, rigged up trip wires, and did whatever else they could do to protect the newly-held Allied territory in Normandy. As word traveled about the Kilted Killer and his band of misfits, more emboldened Frenchmen joined the fight. Blowing up bridges, hijacking supply trucks, and even giving the school-children boxes of nails to scatter on the streets, were all tactics used by MacPherson's now tall tale of a team. The crowning achievement came on a bridge in the Loire Valley, where and his handful of fighters were the only thing standing between a German column of 23,000 men and a vital gap in the Allies lines. Knowing full well that if they engaged, the team of fighters was sure to be wiped out, MacPherson called out the German general and bluffed his way to a surrender. 'I told him that I was in contact with London by radio and could at any time call up the RAF to blow his people out of sight. In truth, the only thing that I could whistle up was Dixie.'"; "The Royal Kilt Inspector Scotch Ale is brewed to be both bold and smooth like our pal, Major MacPherson. From the caramel and smoked malts, notes of dark fruit, toffee, & caramely goodness are balanced out with just enough hop to make this beer fantastically drinkable. Kilts not required, but encouraged."; "14 IBU".

I Crack!ed open the vent & debated on how to proceed, finally hitting upon a slow, stealthy, gentle C-Line Glug into the awaiting glass so as not to alert anyone or anything as to my presence. Sadly, this did not produce any head, nor did an in-glass swirl's attempt at the same amount to anything. 8=( OTOH, the color was a magnificent Coppery-Brown (SRM = > 17, < 22) with NE-quality clarity. Nose was sweet-ish with a peaty, smoky quality. Mmm. Mouthfeel was surprisingly thin-to-medium. The taste was a beautiful mélange of peat, smoke, treacle, tobacco, brown sugar & dried dark fruits. Mmm. It was supposed to tend towards sweet, but this was semi-sweet, at most. It was a very pleasant surprise in that it finished semi-dry. Well done, sirs! YMMV.

Poured from a pint can dated 12/09/19 (about a month old) into a pilsner glass: Dark and murky pour with a quarter-inch head that dissipated quickly.
A smell of caramel and coffee.
Taste of coffee, slightly sweet. Aftertaste fades quickly.
Feels thinner and crisper than it looks.
Overall a drinkable Scotch Ale, but not my favorite style of beer.

Taste: Raisin and plum up front. Burnt marshmallow aftertaste. Not as alcoholic-tasting as I would expect for the abv.

Feel: Excellent medium carbonation both in bubble size and density. Not too viscous, almost a bit on the thin side for the style.

Enjoying this even in late August when I usually go for lighter, hazier beers. Not too overwhelming or filling.

Poured from a 16 oz. can. Has a dark chestnut color with a 1/2 inch head. Smell is of bready malts, a bit of molasses. Taste is malts, chocolate, some dark breads, a touch of sweetness. Feels medium bodied in the mouth and overall is an enjoyable beer.

Not the best Scotch ale, but not bad, either. I enjoy it.

Pours dark rust brown with a decent head that dissipates to a solid half ring. Faint lacing. Smell is toasted caramel malts. Taste is toasted malts and hops. Nothing too remarkable about this in its own right, but I like it presumably more than most who have left reviews, and think it makes an awesome hot day beer. Remarkable drinkability for 7.1%.

A little thin on the mouthfeel but the flavors that are present are toffee and roasted malts. Unfortunately drinks like a thin porter rather than a scotch ale.

This was my growler purchase the last time I went to Three Brothers, I absolutely love the flavor, it's extremely malty, not too sweet, a hint of hops, not too thick, not too thin.

Pours a dark reddish brown with an off white head that lingers for a minute but leaves minimal to no lacing. Caramel, toffee, malt and some booze in the nose. Tastes toasted and malty but not very sweet. There is a faint toffee taste. There is a decent amount of hoppy bitterness at the end. Can't say that this is a great Scotch Ale but I might say it is a good hoppy amber ale.

I had a hard time discerning this beer from a thin porter or watery stout. There is definitely a roasted malt character, but not enough sweetness is present to really call this a Scotch Ale. Disappointing.