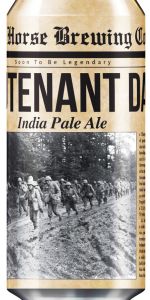 A 650 mL bomber purchased at the Three Brothers compound in Geneva, NY during a Finger Lakes brewery excursion.

A: The IPA is a darker amber color, still translucent but with more of a vernal glow. A head of nearly two fingers resulted in thin patches of lace all around the glass.

S: The nose is citrusy and concentrated, a resiny blast of hops sitting on top of caramel malts. I also smell a dash of cinnamon, an unusual element to waft out of an IPA.

T: Plenty of caramel malts set the stage for the IPA's strong hoppiness. That hoppiness is citrusy, grapefruit through and through. When I had this ale on tap at the brewery, I was blown away by the fresh hop aroma and taste. It's not as strong here but it still delivers a wallop. A syrupy, oily hop flavor lingers long after each sip is gone.

M: The mouthfeel is hoppy, bitter in an unconventional way. The bitterness is more syrupy, gradually bringing the bitterness to the forefront.

D: I've taken my time with the bomber and enjoyed its evolution. It's not nearly as impressive as when served on tap though, so a visit to Geneva is necessary to really appreciate the IPA.

Comes in a hazy golden orange color with some floaties. A semi-aggressive pour yields a huge rocky, creamy white head. Long-lasting with sheets of lacing.
The smell is really sweet, overripe grapefruit, orange, and lemon. Sweet bready malt with hints of caramel. Catty dankness with pineapple, pine, and mango.
The taste is ruby red grapefruit and pineapple forward, followed by orange pith and lemon peel. A bit of cat pee dankness in this one. Simcoe for days. Hints of mango and papaya. Sweet toasted brown bread malt and caramel. Finishes sticky, resinous, and just slightly bitter. Leans sweet, but the bitterness keeps it in check.
It feels medium, well-carbonated, spritzy and it actually reminds me of juice at times. Extremely citrusy.

I can see why this was a medal winner. This is a really good IPA. Another winner from War Horse!

Pours orange with a 1 1/2 inch cream-colored head. Heavy lacing which lasts to the end. Hazy.

I read about this beer winning a New York State gold medal for IPA's and I was very skeptical but this beer is legit. Poured at the brewery, awesome atmosphere, great bartenders, a must visit if you're in the fingers lakes area. LT. Dan is a true east coast IPA, moderate hop, minimal malt, clean, crisp. Not a gold medal winner in my book but highly rated.

A nice cloudy golden orange pour with a frothy head. A nice start. Medium hoppy taste with a slight sweetness. Falls a little flat in the end. Not a bad IPA. I wouldn't kick it out of bed.

the art on the can is cool here, but the beer was just okay for me, its seems a little malty for what its trying to be, and as such doesnt seem real fresh, although i didnt see a date on the can. it also uses falconers flight hops, which i have always known to be exceedingly bitter in that gripping high alpha sense, always right on the swallow, and i get there here. its a lot next to some oxidation setting in, and i feel like ill need to try this one when i can be assured of its freshness, because it seems to promising. i do get some fruity hops in here, also on the finish, slight mango, juniper berry, and bitter orange, but its the green bitterness that takes over and outlasts all of that. makes it kind of brisk at the end for having so much grain flavor, but its overpowering the nuance. a little german sort of breadiness to the grain, less of a crystal malt caramel thing, more of a doughy depth, could be nice if the hops werent fading. its hard to be too critical here of a beer that likely missed its window. i have heard good things about war horse, and will look forward to trying this again and updating this review when i source the beer in a fresher form! i adored the only other beer i have ever had from them.