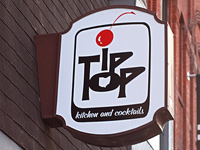 View: Place Reviews
Reviews: 7 | Ratings: 13 | Log in to view all ratings and sort

Stopped in on a Sunday evening before a concert. First look was in the realm of "is this the place". A downtown dive bar impression. Walking in, the long bar is the first thing you're going to see. Booths line the left side, and high-top tables fill the back.

Taplist wasn't huge, but choices were of good quality. ($6 pints of Bell's Double Cream Stout for me)

Food was diner/comfort food. Pot roast sandwich with house made chips was a good choice for me.

It was the type of place my dad would have loved, but probably a little too much of a dive for mom.

ate and drank on 8/14/11
Great place for downtown lunch or after work drinks. The food here is extremely good for the prices. I personally suggest the BBQ pulled pork sandwich. The sweet potato fries are also a must. Though lunch time here gets a little packed, I suggest snagging a place at the bar if there is a long wait. Good selection of rotating taps and local brews. The service is always pretty solid. Great prices on beer and also a very good selection. Bartenders were extremely friendly. Also don't get hung up on the exterior, which looks like some sort of a run down haunt. The interior is great featuring a huge old school wood bar. I highly recommend this place.

Went for a visit on Thanksgiving Eve, so I'm pretty sure we didn't get the typical weeknight crowd for a Wednesday. We had a party of 7 and a couple tables were pushed together for us promptly.

Service was efficient and entertaining, there when you needed them and they left you alone when you didn't. Menu was nice and had a good variety of selections, I don't know where else you can get fried green beans as a side, but they were excellent.

Beer selection was good with probably a dozen taps, Columbus, Great Lakes, Barley's, Lindeman's, Bell's, & Bluegrass. Bottles included a couple Rogue bombers and and a couple others that I can't remember.

Bottom line, food was good, taps were fresh, not as expensive as some downtown places, and when our waitstaff did make 1 honest mistake, they made the effort to correct it immediately, and I got a free beer out of it, can't beat that.

One note, the menu on their website is extremely outdated... listed Three Floyd's Alpha King on their tap list, but of course it's not there, or anywhere else in the city for that matter.

I get to Columbus a couple of times a year and I'm always on the lookout for something new to try.

The name Tip Top reminded me of the old departed Tip Top Tap at the Alerton Hotel in Chicago, so I decided to stop by for beers and dinner.

There is a patio in front as you enter. The entrance is fairly narrow and contains a nice long bar with a beautiful bar back. The place widens in the back and there is a mix of booths and tables. There are pressed tin ceilings, exposed brick, brown paint and red bunting around the artwork adds up to some nice visual interest.

They offer 12 taps that include rotating seasonals from Bells, Great Lakes and local brewpubs. They also offer 9 craft bottles and a few domestic choices. The lines were immaculate. All drafts were served in pints and this included the barrel aged bourbon stout from Blue Grass. While not a huge selection, the beers were well thought out with a good variance in styles and breweries.

Food is "Ohio" comfort food. I thought they were going for upscale diner food and it works. Nice selection of main courses, salads and sandwiches.

I could see this being a bit of a hipster place (1st beer listed on draft and on the bottle list is PBR) but the vibe at happy hour is friendly and the tunes are a nice mix.

I would comeback for the tasty food, good beers, friendly service and decent ambiance.

I got bored today so I took a bike ride. I wanted to stop at Dirty Franks but it was slammed. So I went to their sister store Tip Top. These places are run by the same people who own Betty's and Surly Girl so you know there will be decent beer.

This place is very dark inside. Low lighting and dark colors. Exposed brick, ecclect curtains, old mirrors and picture frames and a bar that looks like it is original to the building.

There are high top tables in the back and booths separated to the left. There is a small outside patio out front along Gay St.

Food is a bit different from the places in Short North as there isnt as big of an emphasis on vegetarian options. On weekends they serve brunch until 4pm.

A decent place, totally one of the places that fit my style in the area.

Stopped by before a show at the Palace. Tip Top is run by the same folks who brought you Betty's and Surly Girl. Parking on the newly 2-way Gay Street can be found at meters and nearby lots.

The exterior looks a little seedy, but inside the atmosphere is warm and inviting with lots of brick, wood and dark colors. As with the sister establishments, there is a certain kitschy feel to the decor, in this case old photos that feature Columbus in its infancy. The bar is on the left immediately after entering, with table seating everywhere else.

The beer selection is decent, although not as robust as Betty's/Surly Girl. There are around 10 taps with selections from Bell's, Thirsty Dog, Great Lakes and others, and imports from Unibroue and Lindeman's. As for bottles they have around 25 featuring GLBC, Columbus Brewing, Rogue, Stone, Bell's, Lagunitas etc. They serve a few import bottles as well, again from Unibroue and Lindeman's primarily.

Service was good on an early Sunday lunch. The server knew the beers available and the styles.

Tip Top's food can be described as "comfort food" in general. Lots of carb-centric plates and sandwiches. I tried the roast beef sandwich on pretzel roll bread and enjoyed it.

Overall this place is definitely worth stopping, and is actually one of the few good beer bars in the heart of downtown.

Tip Top opened recently on the revamped and revamping Gay St. in downtown Columbus. The street was recently turned into a two-street, so business has picked up there, and Tip Top is part of it.

We went on a spring weekend evening, and the place was busy. We were in a bit of rush because we were going to see a show, and we let the host know right away, but we still ended up waiting a while. The host was basically one of the servers who was pressed into the host duties. I felt kinda bad for him. Once we got seated, though, the server was nice and brought out our food quickly.

Tip Top has some great food, including some awesome comfort food and sandwiches. I tried the reuben, which was great. My wife had the Chicken Caesar Sandwich, and said she loved it. Make sure you try the sweet potato fries.

Overall, Tip Top is another welcome addition to Columbus, especially to downtown. I could see this place becoming a regular stop in town.

Tip Top Kitchen & Cocktails in Columbus, OH
Place rating: 4.06 out of 5 with 13 ratings