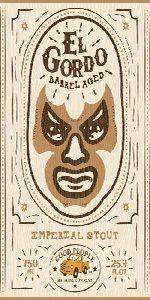 2017 vintage. 750ml bottled served in a Spiegelau tulip. Pours an inky black with a dizzy, half-inch, mocha-colored head that sizzles and pops as it slowly recedes. Nose hits with vinous notes, followed by roast and cocoa, in that order. Taste consistent with nose - flavor profile is bold and sharp with rich dark chocolate and char lingering at the finish. Vinous notes are more expressive towards the middle but persist. Mouthfeel is light-medium in body with an assertive carbonation that quickly drops off and a creamy/silky texture. Overall, a solid RIS - not sure if it might be past its prime as attributed to the massive vinous quality. Not much of the barrel-aging is present, perhaps some ethanol heat.

Thanks to David H. for this bottle, the last of the three El Gordo series. Split with my wife after an excruciatingly dull two hour scholarship ceremony for our daughter.

El Gordo – Barrel Aged is basically El Gordo with an added .4% barrel. Chocolate, bitter, vanilla, with even more roast than the base beer. Marshal Zkukov-level roast. Middle is all black licorice. Nice touch of oak, with the bourbon showing faintly on the finish. Rich & dry, with only the bourbon echo lending any indication that this is an alcoholic beverage. Just like its base & cousin, not tough to put down.

We here in the den of maximum12 can say for sure that the El Gordo line are all very good, but not remarkable (though my wife likes this one much less, for some reason).

Poured into a snifter. An opaque dark chocolate color with a medium sized tan head. Aroma was primarily bourbon and oak with some roasted grain and chocolate. The taste was rich fudge and chocolate mixed with the barrel. Not overly boozy and well balanced for the ABV. Overall a great beer. Highly recommended.

Thanks to JLindros for sharing this bottle.

A - Poured into a Kate the Great tulip a nice dark brown almost black with a two finger mocha head that fades slowly to leave nice lacing and a thin blanket.

O - Overall this was a rather decent beer but the bitterness really clashes with the other elements. Very unfortunate.

Received in a trade, shared with rudzud

Nose tons of raw cocoa beans and loads of vanilla like so almost vegetal thing, very pungent, tons of oak barrel, woody esters and raw oak, also plenty of smoke in the base beer, a bit of roasted coffee and char notes, loads of different dark chocolate and cocoa, also a bit of a spice like a nutmeg clove cinnamon thing

Mouth is med to fuller bod, a bit thicker chewy but not much, nice fizzy carb, just a touch of alcohol

Overall OK, way too bitter spicy hop and spices were a little over the top, nice dark chocolate, vanilla was better on the nose, OK

Smell is dark molasses, charred oak and cocoa with a cedar humidor and a hint of smoked maple.

Oh my, the barrel aging really enhances this particular beer without question. The hoppiness is still there, but there is a rich, deep dark roast that is able to surface, which is enabled by the dark charred oak that enhances the dark molasses and dark cocoa notes. There is still a woody, cedary hop presence maintaining an overall bitter constitution, but after it fully warms, I get an amaretto almond aftertaste.

There's not necessarily a strong bourbon presence--while it's there, I'm getting no more heat than the base. It does have a slick, moderate body, a moderate thick fizz, and a dry finish.

2017 release, 750mL bottle purchased at the second annual El Gordo Day. Pours black with a 1” tan head. Nose is very different than the 2016 realease...much more oak, peat, burnt char. It’s good, just different and a little more harsh than last year. Taste is very similar, a little more oak than 2016. Very little bourbon, but I’m not sure what type of barrels this beer was aged in. It might not have been bourbon. This is a good beer, I prefer the 2016 BA or the original El Gordo.

2016 release, 750mL bottle purchased at the first annual El Gordo Day. Pours a deep black with a 1" tan head. Nose a fantastic! Caramel, cocoa, vanilla, oak, bourbon. Taste is equally wonderful. I could sip on this all night. Alcohol is so very well hidden. I hope this is offered again in 2017!

A very black/ dark brown pour yields a beautiful mocha foam head. Lacing etches the glass with each sip and aromas of cocoa, vanilla and bourbon delight the nose. Great flavors of oak wood, molasses, and dark chocolate coat the palate and the alcohol warms the throat. The feel is thick and the experience is quite wonderful. This may be quite possibly Alabama's best kept craft beer secret! Well done and enjoy!

Holy shit is this amazing, smells of oak bourbon bakers chocolate and tobacco. The flavor is awesome, the barrel isn't overpowering and it leaves that beautiful roasty bitterness. It's the most well balanced BA stout I've ever had.

A: Pitch black with one finger dense mocha head. Lasting retention settling to a thin cap and leaving light lacing.

T: Rich dark chocolate and bourbon. Roasted malts for days with subtle hints of espresso and walnuts. Some alcohol heat is apparent but I suspect will fade with age.

M: Fulll bodied but not thick. Appropriate carbonation for the style.

O: El Gordo is already a favorite of mine and this takes it up a notch. Hoping they continue to do this one next year.

Alabama's best kept secret. Take regular el gordo which is already a masterpiece and times that by two. Once beer snobs discover this stout, it will be a challenge to get your hands on a bottle.

A: Pitch black with a minimal ring of khaki-leaning beige colored head, decent/mild lacing
S: Deep and rich notes of chocolate immediately, along with a smooth, nutty, roasty character, coffee note comes out more as the beer settles, the nose can be a bit dry in a very pleasant way
T: The bitter chocolate and bourbon sweetness are really at the forefront here with the nutty (eight o'clock) coffee notes bringing up the rear, then it is immediately followed by a not overbearing roasted malt character, while the boozy note is definitely present, it is not overbearing, as the beer settles the whiskey (given some time; out of the bottle I mean, this beer brings a more visual sense of bourbon) sweetness and subtle tones of wood do start to come out more in a way that really makes you think of the barrels it was in (hard to put into words in that sense)
M: I wish it was thicker, though it does have a very pleasant effervescence that the mole and standard lack
O: I don't give 5s, and I'm not about to start, I also don't really like stouts all that much because I get bored with them very easily. That being said, trying to understand this beer, and this family of beers in particular has made me a more perceptive drinker and opened (or should I say re-opened) my eyes. There is something visual about this beer, it is experiential in a way that other stouts are not. It; like it's cousins (the mole version and the original) is truly special and I'm really not that much of a locovore, I'll buy what I want and you wont shame me into something just because it's made in Alabama but I love this beer, love it to the extent that I would wait in line for it and it's counterparts for seven hours just to make sure I got a taste and some to take with me. I know for some people (looking at you darklord day and pliny the younger) that's not much but for Birmingham and Alabama in particular that's a big damn deal. You should find this beer right now while it's not at the price of your first born because when the word truly gets out, there wont be a bottle to spare. A votre Sante!

Overall a great representation of the beer. Though the barrel aging leaned a little heavy on the oak side. Most likely spent a little extra time in the barrel than needed. But still very good