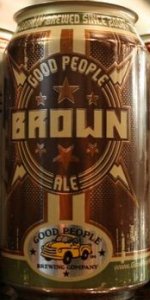 Brewed with 2-Row Pale and 5 Specialty malts, it's malty in both flavor and smell. A heap of Cascade and Willamette add balance to this easy drinking ale. Hole up, have a few, and tell us what you think. We’re bettin’ it’s the best Brown Ale you’ll ever have.

8/3/19...medium dark caramel brown. Scant foam. Nutty and bready. Ever so slight vanilla taste. Has a balanced bready malt. Almost a light roasted coffee sneaks in. Quite mellow. Any sweetness is expertly balanced out.

From a can. Medium brown color. Smells of caramel malt. Medium feel. Moderately sweet with caramel and nut flavors and a touch of hop bitterness. Good and true to style.

I think this would be good with pizza. It makes me want pizza. It has a yeasty, slightly sweet pizza dough taste. It poured out of the can with a very thin head that clung to the glass. The beer is reddish in color. The feel is medium-bodied. The aftertaste disappointingly loses that pizza dough sweetness, but some good pizza would disguise that. I would drink again with pizza, but probably not on its own. (Written on National Pizza Day.)

Pouring from a 12 oz. can into a pint glass. This beer pours out hazelnut in color and has good clarity. Has a thin light tan colored crown. The smell is sweet from the malt. The sweetness is like a light syrup or molasses then mixes with very slight toasty notes. The taste is a very nice balance between a more prominent than the nose toasty notes and sweetness mixing with a slight hop bite that goes well with this beer. It just adds another element. This brew also has some nice bread/cracker notes. The mouthfeel is medium bodied and good for the style. A little dryness that goes along with the toast you get.

16oz draft served at Draft Room in Franklin, TN inside Kings. The beer is light brown with a red tint and khaki head. The head recedes to a thin cap with little lacing. The aroma is a little nutty and bready. The taste is nutty with a hint of caramel and little bitterness. Mouthfeel is thin to medium bodied, adequately carbonated and mostly dry in the finish. Overall, good. Solid food beer and enjoyable.

Pours a slightly dark brown and leaves the same colored body with a slim one finger white foamy head that dies within about a minute, some nice foamy lacing graces the sides of the glass in a clingy sort of fashion; the aroma is nutty, malty, slight caramel all combined nicely and coming forth strong and sweet; the flavoring is mainly nutty and sweet; slightly nutty/caramel malty aftertaste and a dry sort of nutty finish; its fairly easy on the palate for a Brown Ale but still packs a slightly heaviness to sit just right on a Winter’s night. Overall, definitely would have again.

Pours clear, dark brown in color, with one inch head. Taste is dark chocolate, baker's chocolate, and leather. Medium bodied and slightly bitter. Makes for a sold, sessionable, brown ale. Have had better in the style, but this one is good.

Looks like you just poured a can of Pepsi . Not much smell slight malt. Excellent honey malt taste. Medium body. Very good beer unless you are one that taste with your nose.

Not much to say, hoenstly. This beer is fine, and worth a try if you see an individual can for sale, but not anything I would buy again or purchase a six-pack of.

Pours a medium brown- cloudy with a thin, creamy light tan head. It leaves small soapy lacing. The aroma is mild and malty, with a hint of nuttiness and a little earthy hops. The taste is much the same with a more pronounced hops profile. The body is lighter, just shy of medium-bodied, with a persistent little carbonated tingle.

Pours a clear, copper color. 5/4 inch head of an off-white color. Decent retention and decent lacing. Smells of slight piney hops, sweet malt, hint of alcohol, hint of yeast, and a hint of caramel malt. Fits the style of an American Brown. Tastes of strong sweet malt, piney hops, hint of caramel malt, hint of yeast, and a hint of alcohol. Overall, decent appearance, body and aroma are identical, an average Brown.

A very solid offering style wise from a brewery with a great reputation. Smooth creamy feel with the sweet and slightly roasty flavor of the Brown ale style. Would buy again if it was in my distro.

Poured from a 12 OZ can into a pint glass. The appearance is a slightly hazy copper brown in color with a large off-white head. The aroma is full of roasted malt with a hint of nuts. The taste is malt with some caramel or toffee thrown in. A real good brown ale

Pours a medium brown color with tan head. Roasted malt, toast, and nuts on the nose; follows onto the palate. Medium bodied. Finishes with a nutty note.

Thanks Matt.
This was poured into a mug.
The appearance was a fairly dark brown color with a one finger white foamy head that dissipated within less than a minute. Light lingering lacing graced the sides of the glass nicely.
The smell had some rich sweet nutty to toffee malts up front sliding into fresh (what seems like maybe fuggles hops - I'm getting that almost "soapy" sort of aroma, but fairly clean and not overbearing like some fuggles hops come across). Light piney hops also slide in for a light balance.
The taste copied the aroma for the most part - sweet, yet lightly roasty with the hops bitter yet more leaning to the earthy side of the wheelhouse.
The mouthfeel was about light to medium on the body with a fairly sessionable trait to it. Carbonation felt right for the style and for me as there's just enough power from the hops to subside and allow some bitterness to show.
Overall, as an American Brown ale its a good one. I'd have it again.

Even though brown ales aren't my favorite, I thought this was an outstanding beer.

This is probably the best brown ale I've ever had.

Smells of brown sugar, biscuit, and woody and piney hops.

Tastes of brown sugar, biscuit, caramel, and hints of maple. Hoppy finish on the side of piney and dry bitter.

Medium body with tingly carbonation on the roof of the mouth.

Pretty great brown ale, nice flavor and body. Very drinkable and something worth a try.

Poured a beautiful chocolate brown with a frothy mocha head. The smell was lack luster with a slight nutty scent. The taste had a slight roasty quality to it but overall not very flavorful. In the end I probably should have let it warm up a bit instead of drinking it right out of the fridge. All and all not my favorite brown ale.

Poured from a can into a mason jar.

This brown is just right in a lot of ways. So smooth but with just enough carbonation. Nice and malty but with some nice hop notes to spice it up. Lingers on the palate so I look forward to the next sip. Highly recommended for brown ale fans.

Pours caramel with a brown head. Aroma is pumpernickle, lemon zest, brown sugar, and pine. Flavor follows suit. A crisp, medium bodied mouthfeel. Overall, not usually a hoppy brown fan but this one is great.

L: Pours out with nice head that disipatates easily. Has a nice medium brown tint.

T: Carries a nice hint of nuts, toffee, spice flavor from hops. Gives a easy finish with little after taste. The bitters carry a citrus flavor through the end.

O: After going through some different browns lately. This one has the best body of them. Taste was a little better then others. For being a brown ale it has my vote for another sixer.

Brown from Good People Brewing Company
Beer rating: 85 out of 100 with 340 ratings