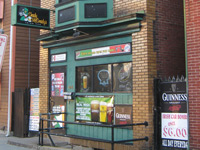 View: Place Reviews
Reviews: 27 | Ratings: 38 | Log in to view all ratings and sort
Reviews by yourefragile:

I stopped in on a Saturday afternoon around 4:00. I was just here to get some carry out. It had a homey, working class bar feel, although there weren't many patrons, no music was playing. Carry out coolers were primarily filled with cheap lagers and malt liquors, although there are some craft offering, prices on par with anywhere else in central PA. Service was friendly, and overall is probably a place I would go to for a beer if I lived nearby, but not worth a trip for carry out.

I was so charmed by this place, especially during happy hour. G-D, I had a good time having some PA beers and talking to the friendly bartender and patrons. So chill. Why must I live so far away? And I love the name. I'll be bock.

Stopped in here when a friend and I were just looking for a beer bar to check out in the city. I was impressed with the tap list that night, was surprised they still allowed smoking in the building but it's whatever.

A: A darkly lit dive bar but paradise for a beer lover. One of the few bars in PA that still permits smoking and they apparently allow pets (sorry, I am not an animal person).

Q: This place caters to both beer geeks and neighborhood patrons alike.

S: Service was fast and very friendly. Caution: it was not very busy when I was there, so experiences may differ greatly.

The bottle selection suffers somewhat because too much cooler space is taken up by cheap pedestrian beer likely stocked for the neighborhood folks.

F: They have bags of chips for sale but gladly allow patrons to bring in their own food. The bartender also was very helpful by directing me to a place just around the corner that has good comfort food and serves take-out.

Shady McGrady's in the new incarnation is a lot like the old Shady's. The beer selections on draft are excellent, it's still smoky, and the crowd is a wonderful eclectic mix. If you love beer, you are bound to find something you like here! This is the hole in the wall with a great beer selection.

This place was simply awesome - great beers on tap - huge selection, and a nice number of big beers as well. The guy serving was very knowledgeable and friendly. He discussed beer with me and pointed out some of the bottle selection. He also has a printed read out of each beer on tap with its rating from ratebeer.com, with that information at my fingertips selection was easy. I will definitely visit this place again. There was no food, but who needs that from a great bar - especially with all the options in the vicinity. I went here after the Harrisburg beer fest, and thought that I could have skipped the fest and just sampled from Shady's.

My wife and I were in a celibratory mood after the gala opening of one of her fiber art pieces at the Pennsylvania State Museum, which is nearby.

We parked close to the pub and I grabbed my growler out of the trunk for a fill on the way out.

We entered what looks like a typical city bar, kind of run down with smoking and tavern games.

There are a couple of well-stocked craft beer coolers but the prices are on the high side.

We sat at the bar and had delayed and indifferent service but were able to pick from a noble selection of craft brews. On the way out, I asked to have my growler filled but the indifferent bartender said their growler filler was broken. What?

I did have a nice conversation with another beer lover on the stool next to me.

Good beer selection, pricey with atmosphere and service that didn't make me want to make a return trip.

My wife and I were driving from Baltimore to Buffalo and went by/through Harrisburg. We decided to check out the famous Midtown Scholar bookstore in downtown, and we happened to park right across from Shady McGrady's. At first I wasn't sure about going in, because from the outside it looks seedy and cheap... but then I read online about the Shady and WOW! Let's go!! :-)

The atmosphere is what it is. I love it, but you may not. Reminds me of Bob's Bar in Columbus, the Cultural Hub of the Midwest. Very unpretentious, working class, dingy and laid-back. Looks like a blue-collar watering hole in the Rust Belt, which I love, only with 48 taps of craft goodness!

We were in on an early Sunday afternoon, some folks around the bar but pretty empty. Bartenders were nice and service prompt, owner Scott (I believe that's his name) came over and chatted with us about beer and breweries.

Their bottle selection is very good, with singles and bombers from Southern Tier, Chimay, Avery, Stone, Ballast Point and some obscure regional breweries...

Prices were NICE! Bombers of Stone Double Bastard '09 and Old Guardian for FIVE bucks (or two for ten, as the funny owner offered). Beers are about five a pop, but then you get half off during happy hour. Sweet.

You may regret the smoke- PA law says that if you devote less than 20% of your sales to food, you can allow smoking. Shady's has no food, so there is smoke. I don't mind it, but beware.

Otherwise, an amazing place in a decrepit town you ought to visit!!!!

Great place. I was visiting from Pittsburgh and I'm ashamed to say we don't have anything like this from a quality/price standpoint (I'm not even so sure from a quality standpoint). Really good, and smart, tap selection. Many special release Dogfish Heads, great Belgiums, and some really top shelf IPA's, etc... Owner is a really cool dude, I sat and BS'd with him for hours about beer and football. Only slight knocks are that you should eat before you go there and if you a lot of smoking gets on your nerves, stick with the downtown bar.

Entering, they had a long, narrow white-tiled passageway with raised seating areas containing standard tables and chairs fronted by a couple of video games and an ATM along the left wall, along with the Mens' and Womens' lavs. Along the right wall was a cigarette machine, a change machine and electronic darts. The speace opened up considerably with the beginning of the inverted Omega-shaped bar with (now 48) taps, which was slightly left of the centerline. A bank of five coolers was to the right, past the darts and filled with beer-to-go, including 6s, mixed 6s, and a bunch of BMC standards. Other than the taps, the draw was the bank of two two-doored coolers filled with a combination of single bottles and bombers, all of quality. To the right of the bar was a green-felt pool table, followed by the kitchen, headed aft. The pool table area was surrounded by high tables with swiveling stools. A great beer selection, but a strange atmosphere, sort of a neighborhood bar that suddenly decided to get it right with their beer. The real drawback is that they continue to allow smoking and many people indulge in the habit. Ugh.

I have been areound this area for several years and finally made it in one Monday After work. The hours (18:00 to 02:00) don't work well for me for reasons best not to go into here. They still manage to allow smoking. I think it has something to do with the lack of available food (don't excpet so much as a sandwich). The bartender with the limp was nice enough, especially considering the guy I was with turned into and ass after his third beer. There is a constant stream of ____ coming in for malt liquor. So the selection of fine beer is just , well, really out of place. Guys in suits drinking $20 bottles of beer and homeless looking fellows all in the same place. REALLY, really, odd. Don't miss it, just be ready for it.

Walked in from beerfly reviews. Selection was decent lots of good stuff and a handful of breweries we don't get in vt including both bells and hair of the dog. I was able to get a 6er of hopslam and 3 Fred and 3 Adam from hotd on closeout. Good deal considering higher pa prices.

The beer guy who was there really knew his stuff and was super helpful. Showed me all sorts of goodies and told me about some good deals. Worth checkig out if you're in the area for sure. He said he gets Russian river and recently had a keg of pte! So always worth a shot for that. I didn't get anything on tap but he had a great selection.

Was in Harrisburg for a concert and had found Shady's through BA website. You would never know from the outside what a great beer bar this is. Very friendly and helpful bar staff, terrific selection on tap which is being doubled to over 30 taps with no duplicates. Unfortunately no cask conditioned on handpump yet but these folks are really serious about their beer. Our favorite was the Crooked Tree which was gone by the time we returned from the concert so the beers turn over quickly and are served in good condition. Great atmosphere, a real boozer pub. Yes, it is smoking but not intolerable. Wish I didn't live two and a half hours away in Northern Virginia or this would be my local. Now trying to find a reason to head back to Harrisburg!

I was in Harrisburg on a business trip and search BA for good bars in the area of my hotel and I found Shay McGrady's. What a great find. I drop in around 830-9 on Wednesday night and there were mostly regulars there. I know this because the barkeep new everyone's name. I was trying to see what they had on tap and one of the regulars told me to have the Sculpin IPA from Ballast Point. She said that if I didn't like it she would buy the bomber off me. It just goes to show you that regulars are very welcoming. As I sipped my beer I got to talking with the locals and the bar keep who gave me a few samples Troegs Mad Elf among others and was very helpful and knowledgeable. I enjoyed everything I had and the company, everyone could tell I wasn't from around there as I was dress up Business Casual and asked what I did and how I found SM's. I did not try the food but from what I saw it did look pretty good. I did not review any of the beers I had there bc you can still smoke inside and I chain smoked and tainted my senses....oh well I still enjoyed the beers. There was a great selection, good service and good company. I look forward to going back as soon as possible.