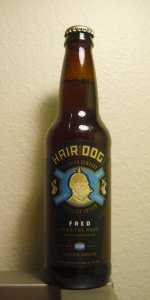 Notes: Fred was created to honor beer writer and historian Fred Eckhardt. Fred is made with Organic Pilsner and Rye malts, Belgian candy sugar and a combination of intense Northwest hop varieties. We hope that Fred will inspire you to share your knowledge with others as Fred has with us.

Mouthfeel is fluffy, dry, and velvety. Overall, it's a very good beer.

Pours a completely opaque drab orange color. Huge, billowy off-white head head forms on the beer - like a full four finger head. It steadily but slowly dissipates until a quarter inch of velvety foam remains on the beer. layers of sticky lacing coat the glass as the head recedes. Aroma is really interesting - There is a certain American barleywine quality to it in that there are these strong citrusy hop notes coming through on the nose. Those notes are overlaid on a malty backbone with notes of candied sugar, light pale stone fruit, and some wood.

Taste follows the nose with notes of caramel malts, aged hops, candied sugars, fresh wood, some light sweet pale stone fruit notes and citrus. It really does remind me of a sweeter American barleywine. It is almost 4 years old at this point and it seems to have aged well - the hops are clearly "old" at this point, but they work well with the base beer. The only other thing I am starting to get as the beer warms up is the rye malt - its giving it this lovely little undertone of rye bread and touch of spiciness. Feel is medium bodied, smooth, warming. Mild carbonation, but not unusually or noticeably low. Semi-dry finish.

Overall it is a really interesting beer. An enjoyable sipper.

Ok so, this is somehow my first beer from Hair Of The Dog, a brewery that recently announced it is closing. So I'm happy to finally get my hands on their stuff, but it's a little bittersweet knowing their fate. Regardless, let's get into this

Pours a murky brownish orange with 2 fingers of creamy off white head that slowly fades to a cap and leaves decent lacing, but there's a ton of bits floating around that formed in little sheets

This definitely has the nose of something very old school, but I'm digging it. I'm picking up on aromas of golden raisin, toffee, rye bread, orange marmalade, herbal hops, honey, and light sherry

It's a little less defined and more flabby in taste, but it's still not bad. On the front end of the sip I'm tasting golden raisin, peppery hops, booze, pear, sweet toffee, and apple skin. The swallow brings notes of spicy booze, peppery hops, honey, bready malt, and toffee

A medium full body pairs with gentle carbonation, resulting in a smooth and slightly spicy beer. Finishes neutral with a bit of alcoholic heat

This is a very tasty beer. I think I'm gonna have to order some of the bottles HOTD has up online before they end up closing

Oh man. This is the one and only Hair Of The Dog brew I had before they closed. I decided to order a bunch of their beers onlne and got the box in yesterday. My first from the box is this very old 1998 vintage, the oldest beer I’ve had to date. Let’s see how it’s held up throughout the years

Pours a light brownish orange with absolutely no head. It literally looks like a glass of caramel 3

It’s definitely leaning on the sweet side, but is honestly not as off as I was expecting. On the front end of the sip I’m tasting black cherry, tobacco, brown sugar, burnt caramel, orange marmalade, pear skin, and dark bread. The swallow brings notes of smoked malt, tobacco, candied orange, brown sugar, oxidized sherry, fusel alcohol, and caramel 3.75

A medium full body pairs with gentle wispy carbonation, resulting in a smooth beer with some boozy heat. Finishes mostly dry with a somewhat messy sweetness 3.5

Well, this was an interesting one to say the least. It definitely is a bit too old but I’m happy to have tried this piece of history 3.75

4.42/5  rDev +8.6%
look: 4.5 | smell: 4.25 | taste: 4.5 | feel: 4.25 | overall: 4.5
Look: Ruby red amber and slightly opaque with a silky off-white head that lids up and settles to an almost nitro look, leaving good lacing behind as it does
Aroma: Brown sugar, warm bread, maple syrup, spicy rye notes, a little booze, earthiness, Candi sugar, and lightly toasted grains
Taste: Follows the nose well. A huge bready malt bomb along with layers of syrup, molasses, Candi sugar, brown sugar, and piloncillo pop to start it off and followed quickly by a rush of rye spiciness and floral and earthy hops. The sweet malt develops crazy depth and the malt and hops intertwine and interplay to the point of almost enhancing each other and the booze is well hidden throughout. Closes with maple, brown sugar, and bread
Mouthfeel: Full, very smooth – almost silky, medium carbonation, and a lightly dry note on the finish along with slight alcohol heat
Overall: This is outstanding and unique. This is not only good and obviously well-made but might be the most unique and deep beer I’ve had in months if not a year. A very interesting taste/aroma profile and the malt and hop interplay is outstanding with each complimenting each other well. A pleasure to try and one I hadn’t had in years. These folks will be missed

4.17/5  rDev +2.5%
look: 4.5 | smell: 4.25 | taste: 4 | feel: 4.25 | overall: 4.25
This is a 2014 vintage 12 oz bottle that I am pouring at cellar temp into my snifter. Picked up as part of my order from their online portal of cellared beers!
the beer pours a clear amber color with some ruby highlights and some suspended particles in the glass. I stop pouring with about an ounce of liquid in the bottle as it gets to be a little chunky.
A dense creamy head of about 2 cm with khaki color foams up and remains as a very sturdy surface covering and creates dense lattice if I swirl the glass.
Aroma is interesting and complex with some caramel and toffee, honey and with a mix of fruit notes, white grape and raisins and also a little apple note. Some general booziness comes through, but doesnt exactly smell "hot". No hop character remains that I can detect in this 7 year old bottle.
First sip reveals a medium body with very fine, gentle carbonation and a bit of a silky mouthfeel.
Flavor is generally sweet with caramel, white grapes, honey and some pear too. No real hop notes here either, but the booze does come through with a little black pepper and some bite on each swallow. I also get a little bit of a plasticy phenol note buried on the swallow. Probably not good to let this 2014 vintage sit too much longer, may be a hint of an unfriendly in the bottle.
Im glad to have had the opportunity to drink this beer and recommend everyone check out the online sales portal at HOTD.

Completely flat brew; no head production. Given that this beer is older than my youngest child, that's unsurprising I suppose. Body is dark for a golden ale, closer to brown, and murky. In terms of ratings, I can't penalize the beer for being so old, but neither can I give it credit for a fresh appearance I have never experienced.

Very sweet on the palate, with the bottle conditioning and the faded hops combining in an intensely floral and fruity manner. Very reminiscent of aged DFH 120 min IPA. Candied orange, light caramel, white bread, honey, white grape, clove, must, wheat, resin, grass. There's more going on that I can't quite place, as the interplay of so many ingredients on a beer this aged is very complex.

Big boozy beer; there's no hiding the double digit ABV, but it's a thoroughly easy sipper. The near-nonexistent carbonation doesn't detract from the mouthfeel, and fits the beer very well.

I'm not sure what the peak is for this beer, but I suspect it comes somewhere before the 7 year mark - given this one experience. However, it does age supremely well; I think it would be a very fun experience to try a Fred vertical, from fresh to 10 years, spaced 2 years apart, as I think each beer would present a slightly differing character from the batches to either side.

Sweet and malty. Caramel and toffee. Orange marmalade. You can tell it once was much hoppier as it has a resiny finish and some dank notes. Some citrus. Honey. A bit of booze showing.

6 years may have been a bit too much aging.

Reviewed by snowmageddon from Massachusetts

Reviewed by Ghrymm from Canada (BC)

L: Cloudy golden orange pour with 2 fingers of foamy white head. Nice lacing... some sediment at the end of the pour.

T.F: Toasted grains... some caramel, but lacking some of the expected sweetness. Kind of flat on the flavor... stale-ish hops, some yeast esters, but not loving this. Medium bodied... with the ABV not overly hidden. Smooth carbonation.

O: This one didn't do it for me... not sure if I had a bad bottle or what, but I expected a lot more.

Reviewed by travolta from California

Taste: Very syrupy with fresh red apple cider right up front that has a hot alcohol finish. Little bit of spice in the middle.

This smells like peach syrup, sugary malt, booze, and molasses.

This is fairly gross. It’s just so overwhelmingly sweet and just too “big.” It tastes like concentrated fruit and booze and caramel.

This has basically no drinkability - it’s hard to drink, and it’s just not enjoyable.

Maybe this was a bad batch, or maybe this is just overall a gross beer. Whatever it is, I don’t want to try this again.