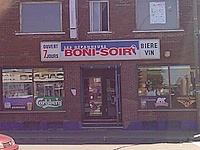 View: Place Reviews
Reviews: 35 | Ratings: 54 | Log in to view all ratings and sort
Reviews by Whatup14:

Insomniac from Canada (ON)