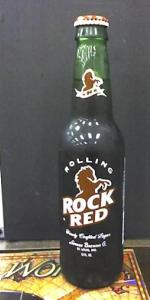 Notes:
View: Beers
Reviews: 8 | Ratings: 17 | Log in to view all ratings and sort
Reviews by acrawf6:

I'm a sucker when i see new beer, no matter what it is...

Pours out light orange amber with a slightly tan head that drops to a decent centimeter throughout most the drink.

Smell. grainy and sweet. Similar to a macro, but with just a little more of a punch. The sweetness of it is a bit appealing.

Taste. About what i expected. Has a small bit of a roasted malt character, but overall the flavor is not too appealing. I get a little creaminess, but it also has a small buttery dyacitil (sp?).There is a character in it that reminds me of a marzen, but a poor attempt at one. aftertaste is a little puckering.

Mouthfeel. Body is ok, somewhat of a medium body with ample carbonation, but still has a creaminess to it.

Overall, I dont want to knock this one, but i also dont care for it too much. It's on the lines of Killian's and michelob amberbock. Certainly good enough to drink, but it just has a flavor that is wanting me to have a better beer.

I grabbed a six pack of this from the local Kroeger super market while vacationing in SC.
Appears a deep, copper toned amber with a small off white head that slowly fades out. Tiny speckles of lacing are left around the glass.
Smell is of toasted grain, biscuits, and toffee up front. So far, so good, right? As enticing as this starts off, it becomes less enticing once I detect notes of the old Rock in there that I stopped drinking a long, long time ago. A hint of wet coins is covered up by the sugary, quality, darker grains but it is there.
The taste echoes the aromas with a toffee, and caramel flavor coming through with a mild smacking of grass-like hops in the background.
It's just a tad thin and doesn't seem to stand up for the duration of the drink.

Ironically enough(IMO), this was released as an answer to the Yuengling surge that has overtaken the South Atlantic region. I believe that Yuengling has done so well along the east coast b/c so many NE'ers(or people visiting the NE) have demanded the standby while on vacation, or relocation...and it's done well away from the home base of the Mid-Atlantic. As for the fate of Rolling Rock Red? I'd drink it again. I certainly wouldn't expect it to compete, surplant, or take huge market shares from the East Coast's newly hailed favorite son, "Ying'r".

Thanks to jcwattsrugger for this!

Pours amber with an orangeish/reddish tint. A thin head becomes an isolated patch.

The taste is not much. Some caramel mixed in with mild grain and a non-descript "washed out" hop touch. There's a bit of "wet cardboard" but very faint. All-in-all, neither "good" nor "bad". Inoffensive and pretty clean. Some toasty "red" character.

A beer with a "macro" character with some toasted caramel. Light-bodied and inoffensive and smooth enough to be pretty drinkable.

Rolling Rock Red pours an orange color with a thcik off white head from a green twelve ounce bottle. The aroma is macro lager like, with a hint of metal. The flavor is predominantly malty, and seems like there is a bit of hops trying to be tasted. There are hints of metal in the flavor as well. I wouldn't bother.

I got this in my store and was a bit interested but I should have known better! Pours a thin, meager head with a watery look and a tinge of red. Smells like some sweet rainwater. Frightened, I took a sip. Fizzy mteallic aftertase with no hops and maybe one malt grain. Had to pour this one out. Sorry Rolling Rock.

Pours a clear orange with fast fading thin head. Smell: corny adjuncts, metallic character, little bit of caramel malt. Taste: big time corn and metallic flavors, some caramel malt, a touch of boiled leafy hop, but the adjuncts are the most prevalent flavor. The mouthfeel is ok, dry in the finish with a touch of sliminess. Definitely not something to try again.

As a Rolling Rock fan and crediting Rolling Rock in getting into beer, I picked this stuff up at the supermarket the other day. I was a bit skeptical about it due to the fact that Rolling Rock is now brewed in St. Louis instead of Latrobe. Either way, the first bottle of Rolling Rock Red wasn't as bad as I thought it would be.

The appearance was a dry amber red color with little to almost no head and lacing. After a quick dissipation, some of the head residue rested on top of the brew. Nothing too amazing here, but it wasn't terrible.

Smell was a faint hint of regular Rolling Rock and corn. The overall aroma was light, mild and very missing from what looked like a very nice beer.

Taste was pretty adequate. It had characteristics of the regular Rolling Rock, but it was a bit thicker than its cousin. With a nice touch of frothiness at the end, the beer had a nice bitter finish as it went down the palate. Not a bad brew at all actually and it exceeded my expectations.

Mouthfeel was actually really good. After drinking a sip of this stuff, it became very frothy inside my mouth. I could taste the ale a lot more and it certainly tasted better than it smelled.

For drinkability, I'd recommend it to my beer drinking friends. It's a good brew, not great, but not terrible either. It certainly has a nice bitter touch to it, and it's an interesting experiment on Latrobe's brewing part. Not bad!

My expectations where met.