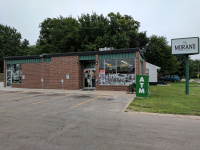 When I was able to buy alcohol this was the first place I went, it was Sherills Liquor Works then...on to 28 years later, this place is the place to go for singles...you don't need to get mix 6 packs either...it's divided by color codes on the shelves as to what the six packs would be or you can just grab singles with individual prices listed under the product. Also the cooler held the bombers and other treasures which I was shown to as soon as I said I was looking for some craft beer. They are expanding to 70 singles choices soon, I will be going back to check it out!
UPDATE 8-27-13
Just stopped back in and the new coolers were packed with great singles, picked up a mix 6 with some brews I've been wanting to try....great place!
UPDATE 7-7-16
They put in a tasting room!

Awesome little place, great tap room in the back. Best mix a six in Lincoln and a great beer cave hidden behind the singles cooler.

Small liquor store with a 6 stool tasting bar in the back. They cram a big variety of beer into a small place. Lots of single bottles. Very friendly folks with 8-10 beers on tap. Enjoyed 3 small ones. If I lived nearby I would visit often.

A bottle shop that now sports a small bar in the back. You can get a glass and enjoy it while shopping. Or sit and catch the game. The bar area is small, but nice. Selection is ok, and is mostly single bottles. They also have a small beer cave with a good selection of bombers. I recommend if you are in the area.

Lots of beers, something like 500+ different craft beers. The owner is Cicerone certified and knows his beers. Gave great advice on what beers pair well with various foods and had a fantastic selection of beers. They sell a 6 pack that is mix and match and you can get various micro brews or craft beers for $7-9 a 6 pack which is a pretty good deal if you want to try different beers. Highly recommend this place if you are a beer drinker and like to get beyond the bud lights of the world.

Awesome singles selection separated into different grades, with great six pack prices. I put together everything from stone and odell to weihenstephaner and mad river. All regrigerated, with a back section for a pretty sweet bomber selection. Also, only place that sells stone that I've found in nebraska. Awesome place!

My first visit was 9/9/12 after a recommendation from a cashier at N St. Drive In as to the best singles selection in town. The store is small and unassuming in a neighborhood south of downtown. Upon entering the store I was immediately greeted by a older gentleman watching a football game on television. After a couple minutes of looking around he asked if he could help me with anything, and after looking around a few more minutes I saw something breweries I didn't recognize and asked if he could tell me anything about them; he informed me he was filling in for his sons, the owners, and didn't know very much and suggested I come back later. He was very polite and helped me box up my three mix sixers.

The mix six was the highlight of the store; there were four coolers of well-stocked and diverse 12oz bottles (and one door of macros 40s and malt drinks). The bottles were all clearly marked for one of four price points, which was on a sign above, and empty six-pack carriers were off to the left. I saw most everything I would have had to grab a six- or 12-pack of at N St., generally focusing on local and regional stuff (Blue Blood, Empyrean, Boulevard, etc).

The large format bottles were to the left of the coolers, against the west wall (side note: what's with SA Infinium in Nebraska nearly nine months after release? I've seen at least a case between Moran's & N St. Drive In.). All the stuff you'd be looking for in NE: NBC, Boulevard Lips of Faith, Lucky Bucket, small batch Upstream, etc.

When I returned a couple of nights later to pick up a couple more things I had researched I was able to speak to one of the owners and he gave me a couple of suggestions and even dissuaded me from buying a bottle he thought to be of substandard quality.

While I think N St. Drive In is a necessary evil, this is definitely the place I'll go to first the next time I'm in town.