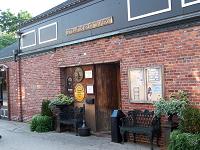 View: Place Reviews
Reviews: 41 | Ratings: 68 | Log in to view all ratings and sort
Reviews by Oleyomoleyo:

Has that pub vibe. Seemed like 50 beers on tap. Many only $3 till 9pm. My go to place when I want to sample difference brews at a nice casual place. Waiting staff is very friendly!

On Market St just a stones throw from city hall sits this landmark of a Manchester Pub. I've been here quite a few times over the years. Currently somewhere around 100 taps with lots of local but also regional and national craft beers. Pretty good pub food. Live music often. 35 taps on Tuesdays are 2 bucks. Popcorn is always free.

I have been here several times over the last two months or so, and I am beginning to get frustrated. I have been there on Sundays, Mondays, and a Friday, and every time, they seem to be out of a large number of their crafts on tap. Just last night, a Friday, I had two beers there (DFH 90 and Sebago Frye's Leap), but only after going through five or so choices that they were out of. Eventually, I just asked to be surprised with an IPA that they actually had. This has been the story most of the times I've been there. I was told that they receive their shipment on Tuesday, but I can't imagine that they'd go into a weekend with so many taps missing. I wish they would at least provide a list of taps that are missing, as our server did last week (you da man, Chris D.). Food is decent, and half-priced apps during happy hours are a good deal. I'll probably give it a few more tries before trying to find something else just to see if it improves at all.

Visited frequently over the past couple years. The tap selection is often quite extensive and in addition to having usual craft beer contenders, and a good assortment of New Hampshire locals, expect to have a few choices lined up as often the menu is updated on a weekly basis only and many kegs will get kicked over the course of that week, particularly for seasonals and limited beers. On the other hand, it's likely the only place in town you might find KBS when that rolls out in April, as well as anything else that might not get a lot of kegs into the state.

The atmosphere is pretty typical of any manchester bar; often flooded with a crowd of 20 something college kids, and some older folk looking for a night out. There is a restaurant area and a bar area. The bar area on weekends or tuesday (hosting a $2 special on a list of select taps) will be harder to navigate, but on a Sunday or Monday night the place is often dead and you can sit right up without much problem.

The music itself is the biggest complaint, often a blues jam band that nobody is watching yet still plays over any reasonable conversation. Makes it both difficult to converse with your group and even when trying to order from a bartender or waitress at times.

Never problems with the staff that I have seen in other reviews. The bartenders are knowledgeable though depending on when you catch them might not be as talkative or particularly helpful on some nights (especially while busy) but far from a bad service either. The more often I go, the easier it got to get into a rhythm, and they will remember regulars and good tippers which will go a long way on return visits.

Prices are fairly average, with happy hour specials ($3 pours on any non-limited release kegs) and the $2 tuesday making it attractive on nights when my friends and I want to go out for a beer.

The best recommendations when going would be to try a lot of the local new hampshire beer. With the nanobrewery laws exploding the amount of brewers in the area, it's the best place to go and find a lot of them in one spot if you don't have time to visit the breweries themselves and covers just about all of them within 15-20 minutes in any direction from the city.

Overall it's a good place for those who live in or nearby, and those who are staying in town and want to find some craft beer while visiting.

Service is horrible at this place. I'm from out of town and visited July 2014 and went midday during the week. Only one person sitting at the bar and my buddies and I waited forever to get a beer. Once we had or beers it was as if we never existed.

Returned May 2015 with wife and sat inside at a table. Took forever to get menus, drinks, food but when it all finally came (forever and a day), it was good stuff though.

Nice place with over 100 beers on tap. Got to try Shipyard Smashed Pumpkin Cask condition so that was a big plus.