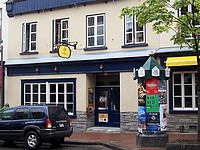 View: Place Reviews
Reviews: 3 | Ratings: 7 | Log in to view all ratings and sort

La Ninkasi du Fauborg is right on the main entertainment and dining strip of Rue Saint-Jean. It's a nice looking and comfortable place with wooden floors and exposed brick, fusbol, pool, and a stage for live music and other events which is really what it's known for. That means that during the day and early evening it's generally pretty empty, and that it's then packed later on when the music picks up (or anytime a good soccer or hockey match is on). There's also a large terrace out back that's great in nice weather, and also heated in winter.

There are 25 taps spread between the bars with a good deal of Unibroue beers, and the rest are locals as well (Les Trois Mousquetaires, Boréale, La Barberie, Charlevoix, etc.). They also have their own beers which are done as collaborations with other brewers. It's a pretty nice selection which has grown. 4 years ago I would have probably called it an OK selection given that Unibroue beers are so common, but that's completely changed and I'd highly recommend a stop.

Additional things to note: open everyday from noon until 3 am; limited food; pub quiz at 7 pm on Mondays; karaoke pretty much every night at 10 pm.

Described well by previous reviewer. I would add that there is a really nice upper deck patio. We were there in July and because it was raining at first, we sat at the bar. The bartenders didn't speak much English and we unfortunately don't speak enough French to get a good sense of what styles of beers other than the Unibroue's. But I had a pretty good IPA. They had a band in the place and they were LOUD...really. painfully LOUD. They were good, but holy shit ! Luckily, the rain had stopped, so we moved up to the deck and still heard the band at a bearable level.
Worth trying out....

This little gem of a beer bar is nestled in Quebec's old city. Had the great privilege of stopping there for a couple of hours this past spring. There wasn't a soul there in the middle of the afternoon on a Sunday except the bartender Mathew. Found out he was the owner. He ended up talking to us for quite some time about everything beer related. They had every Unibroue beer on draft!!! It was phenomenal! There were 4-5 other selections on draft as well, however we just stuck to the Unibroue beers. Ordered a plate of fries with some different dipping sauces. They were excellent. Mathew even gave us the recipe for one of the mayo based dipping sauces. GREAT!

The vibe in this place is truly cool. They had late 50's and 60's music playing the whole time we were there. It seemed to really fit the occasion. Decorated appropriately with beer memorabilia, particularly Unibroue. I can only imagine what it's like there on Friday or Saturday night. Intriguing artwork adorned the walls upstairs.

I think about this place often. Hoping to get back up that way soon. That would be my first stop. I hope that puts this review into perspective for you. It's so definitely worth going to. It's just one of those places that accommodates a nice long afternoon or evening of good BEER!