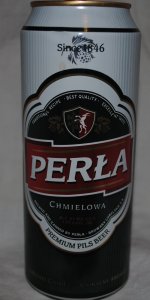 Notes: Perła Chmielowa is the leading product of the brewery. The finest quality ingredients, the use of the best hops of the Lubelskie region, and the original centuries old recipe have the greatest influence on the unique attributes of this beer, its characteristic bitterness and the golden color. Owing to this Perła Chmielowa is able to meet the demands of the most exacting gourmets and boast worldwide appreciation.
View: More Beers
Recent ratings and reviews. | Log in to view more ratings + sorting options.
3.87 by balizz on Jun 09, 2021
3.21 by Dentist666 from Russian Federation on May 11, 2021

Pours clear golden. Nice thick fine head. Smells a little strange, very boozy. Sort of an odd taste too, but I can get behind it. It is from halfway around the world after all, certainly not something we're used to in the Midwest. Mouthfeel is pretty crisp. It's pretty rich in character for a pilsner. Decent.

Poured from 500ml bottle into pilsner glass. A thick, foamy white head drops slowly with mild lacing. Color is slightly hazy light gold with abundant carbonation. Aroma is pungent grains, grassy hops, and bread dough. Mouthfeel is light-to-medium and frothy with a drying finish. Flavor is quite sweet, malt dominate with hops taking a backseat. Overall: good but a little cloying. Would not want to drink more than one in a session.

Canned in a big old 500ml can and purchased whilst waiting at the chip shop for my order at the convenience store next door
Pours a crystal clear light wheat coloured body with massive thick white head
Aroma is glucose and rice powder
Flavour is not much more than the aroma, some slight hempish notes

L- Quite pale gold, clear, pours with a thin head of curiously large (2-3mm) white bubbles that fast clears to a thin ring.
S- So mild, almost nothing, perhaps just just bready grain.
T- Quite zesty and bright, I suspect that is as much from dissolved CO2 as hops as it's edge reminds me of the dry/zesty edge in soda water. The flavour is pretty austere, a bit cardboardy, a bit over-carbonated factory generic lager.
F- On a hot day, at that mountain-top beer-shack you've spent 10 hours hiking towards you would be grateful to have one of these. One word I'd use is refreshing. There are a couple of others too, but I better keep them to myself.
O- The beer has the profile of a brew that's had too much of a monopoly in it's native market, so it's decidely average yet to be found everywhere. Like Tiger Beer in Singapore. Like Long Life/Harp/Double Diamond/etc/ect back in 1970's UK.
There is nothing about this beer that would lead me to buy it again. It's dull and characterless even compared to UK/under-license brewed Stella and Kronenbourg...
Bought from a convenience shop, Oksa Quality Food, 117 Clarendon Road, in London W11. £1.30/500ml can BB: 02/02/2021.

When I was in Lublin for 6 weeks everyone who had this beer did not want it again. People were resorting to Heineken over this, but our main bar ran out of Heineken after just 3 weeks. This is like a poor mans Heineken, it attempts to be neutral but still leaves a poor aftertaste to it. Eh it ca deserve 2 Smirnoff Ices/10

I thought it was a serviceable lager, fairly generic but nothing offputting about it

Pours clear, gold in color with 1/2 inch head. Taste is grass, honey, and dark bread. Medium light bodied, sweet, with moderate carbonation. Makes for a nice and clean crisp lager. Could do a couple.

Poured from 0.5-liter bottle into a flute, Pale golden yellow color, with a one-finger white head that settled quickly leaving no lacing. Lots of carbonation, with a steady stream of bubbles rising from the bottom of the flute. Lovely malty aroma, with notes of dark bread, light caramel, grassy and herbal hops, and tart apple. These characteristics describe the flavor profile as well. Slightly sweet, with just the right amount of pleasant bitterness. Mouthfeel is on the light side, with a finish that is crisp and clean. This is a very good pale lager that would pair well with a variety of foods, but works just fine as a nice, refreshing stand-alone quaff as well.

Great aroma when you open the bottle, very inviting.

Seems a bit sweeter than the Perla Export version. There is kind of a honeyness to the overall experience, and there is some bitterness on the after taste. Needs a bit more hops though and if they made it 7% it would be pretty good.

Well made, fairly inoffensive, more interesting pilsner than most. Possibly this unconsciously is receiving a higher mark than it should due to the fact this is my first beer for about a week...

500ml bottle from Express shop, Warsaw (2.69 PLN):
Definitely up there with the worst of the Polish beers that I've reviewed here so far, this one was very cheap & basic tasting with made it a hard one to work my way through. There was some early sweetness but the balance wasn't great & too many adjuncts featured throughout as well making it one that I really struggled finishing & I wouldn't have again.

This beer pours a clear, bright medium golden yellow colour, with a near teeming tower of puffy, tightly foamy, and caked bone-white head, which leaves a bit of low-lying craggy atoll lace around the glass as it quickly blows off.

The carbonation is fairly benign in its lazy-seeming frothiness, the body a so-so middleweight, and mostly smooth, perhaps a hint of wan hop ingress making for a mild ado here. It finishes off-dry, the general cereal character predominating, while the minor fruity and noble hoppy essences fade to black.

Overall, this is a serviceable enough strong Euro lager, despite the brewer's claims to Pils status - no real off-flavours, a capable hop imprint, and as mentioned, some deftly integrated additional booziness. Plain, yeah, but easy to put back, and dream of Continental vacations past.

This is a light, biscuity sweet beer that is a fine summer beverage but is eminently drinkable at any time. Light enough to drink for lunch and a worthy alternative to similar German biers such as Hofbrau Munich,

Taste: Same as above, but with a slight metallic note.

Poured from a 16.9oz bottle into a US tumbler pint glass.

A: The beer is a light gold color with a thin white head that fades very quickly and leaves a very thin lace on the glass.

T: The taste starts out bready with flavors of lager yeast, grain and adjuncts followed by a mild malt sweetness. The hops presence is also mild but brings a little bit of balance. The after-taste is slightly bready and slightly sweet.

O: Not very flavorful, goes down ok, not too filling, mild kick, decent representation of style, it’s not too bad for the style but there are still some others in the style that I would choose first.

smell is that of dried hemp

taste is medium dry with a definite taste of beer. Goes down well paired with sunflower rye bread

This beer reminds me of the early stage of lager drinking, a real nostalgic gulp for me. The flavour reminds me of days past - a sip of beer in the cool summer breeze in the city, a hazy stroll through bustling streets whilst you take a mouthful closer into the unknown.

A top drink for anyone doing street beers with a close friend.