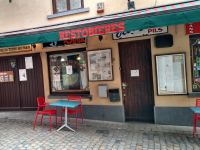 View: Place Reviews
Reviews: 7 | Log in to view all ratings and sort

Which was drinking lovely. Also stole a few sips of my wife’s perfectly poured Orval. Bottle selection was extensive. For lunch I had the Ardennes Ham and Melon plate to start, and the Roast Chicken and Gravy with Frites for my main. Both dishes were incredible. Super funky vibe in this place with lots of eccentric artwork and off-beat memorabilia on the walls. Service was very good as our waitress was warm and inviting and she did a great job recommending my beer. Our overall experience was exceptional, and we would happily come back.

One of the few places in Brussels still carrying the fading torch of true Belgian "cuisine a la biére", which is nearly on the verge of extinction. We had an amazing meal here, rabbit in gueuze, and the daily special which was smoked pork in Hanssens Cassis sauce. The smoked kip-kap headcheese was equally excellent, and paired well with draft Boon lambiek served in a 1L pitcher.

Alain Fayt the chef/owner/curator was present, he stopped to chat with us, even bringing out the huge side of smoked Dinant pork we were about to eat. He was very personable and a joy to learn from. He granted us access upstairs, where he houses his many collections. Vintage beer signs, antique meat grinders, tins of the royal family, wooden coffee grinders, all sorts of eclectic antique oddities. The vibe is extra 'gezellig' and cozy with impressive decor and a smaller than expected dining room.

Beer selection was great, and many dishes are prepared with Belgian beer, which is getting harder to find in Brussels. We had the draft Boon lambiek and shared a 750 of Girardin with an amazing meal. Overall I highly recommend it for the excellent food and unique interior, the classic beers here serve to elevate the experience.

Quintessential Belgian food and great beer selection. True gem is owner, Alain, and his love of Belgium, food and beer as well as collecting tins, match books and royal paraphernalia. Bring a good beer from the states. Ask to see the game room and chat about the royals and have a great history lesson. Wisteria in spring is impressive. I always stop in for at meal when in town and chat going on nearly 20 years now. Don’t miss him as he is getting older and quite a character. Last time his Arend costume was new.

Off the beaten path, but with in walking distance of the Grand Place. This small quaint restaurant, offers top notch dishes, to pair with beer selections from a list that while not extensive is well chosen and will likely offer you several you've not tried before.

The friendly and knowledgable staff will offer advice if you're uncertain. Reasonably priced when compared with restaurants in Brussels.

Stumbled upon this place by accident and certainly glad I did.

Atmosphere is cool. There are probably 50 coffee bean grinders on one wall and meat grinders, tin boxes, and other various things around as well.

Quality of beers was good. Had my first faro ever here. Woo hoo! List is not your typical kind of thing. Plenty of nice stuff here to go on. A few taps available as well. Service was good. I'm going to assume the man waiting on me was the owner as well. Very professional, but laid back and cool. Food was actually quite good. Kind of seemed like country cooking to me, but a good variety of stuff. And the portions seemed to be American sized. I was stuffed halfway through my entree. A bit pricey at $30 (I got the set menu and two beers), but this is Europe and you're on vacation. So who cares. If I had the option of returning here eventually, I certainly would not mind doing so.

Had lunch here a week ago Saturday. This restaurant is in a lovely section of Brussels near a flea market on Saturdays and near a number of antique shops - well outside the tourist area of the city. Walked in the first time and there were no seats but came back 5 minutes later and we were seated. This is a small place with a great deal of antique scales and beer bottles, etc. The ambiance let's you know you are in a beer restaurant and this might be a pretty special meal.

The beer list was quite excellent as well. Not particularly long but a number of interesting choices from specialty brewers. The waiter appreciated our knowledge and provided us with excellent beer/food pairings. When I go to a quality beer restaurant in Belgium, I am not afraid to let the waiter make beer choices for me - they often will come out with something that I am unfamiliar with or I will gain a new appreciation for a beer that I may not have liked all that much when it was not paired with food.

With regard to the food, I started with the escargots, which was quite excellent. My steak on the other hand was overdone. My wife's pork was too salty for her but I thought it was quite good though not spectacular. I would like to attribute my steak to it being the end of the lunch seating but in the end they jury is out on the food. I think a perfect weekend in Brussels is dinner at In 't Spinnekopke followed by lunch at Restobières the following day.

UPDATE January 2012: The restaurant has moved more or less across the street to No. 9. The menu of Belgian comfort food is practically unchanged, still down-home tasty and well served in surprisingly similar digs (they didn't even put in a comfy new bathroom). The old No. 32 remains in service as a bar, which is a great, great idea.

This hideaway in a characteristic part of old Brussels should be on every beer hunter's itinerary, or anyone looking for a table to while away a misty evening. My only hesitation in recommending it is a fear of its scarce seats getting hard to book. The beer list isn't encyclopedic but is almost the better for it; a mix of harder-to-find items from across Belgium, it's closely tailored to the food, which remains at the center. The strength of the place is the ability to pair with the fare, which tend toward slightly tweaked takes on Belgian classics. The menu looks pretty standard -- unadventurous, even -- except for how it weaves a beer into each item to evolve the dish in some interesting way. For example, chocolate mousse, which can be just a puff of bland sweetness, gains a complexity and depth (plus a more liquid-y mouthfeel) with the roasty malt of Hercule Stout from Brasserie Ellezelloise. The cooking, with an old-fashioned and slightly heavy touch, befits its down-home surroundings. Down-home but not downscale; typically Belgian, the standards are high, and satisfies the non-beer hunter alike. The set menus are almost impossible to pass up and encourage the right approach -- several courses, several beers, all the better for following the embedded selection. Just share a De Cam or some other old-school, acidic lambic, perfect aperitif, while you pick which one. Prepare to spend some time here -- service is friendlier than it is crisply professional, and your order may be brought by the friend-of-the-owner-cum-server in between wandering around with his 12-string guitar, mercifully stopping short of a singalong. Later, don't be surprised if the proprietor stops by for an affable chat, playing guess-the-old-kitchen-gadget or just expounding on his passion. A special occasion at your table *might* call for something from his personal cellar (but be very discrete). The locations can seem a bit out of the way by night but it's one of the most-loved places in Brussels to while away a fine Sunday when most of the town seems to be wandering bewteen the flea market at the bottom of Restobieres's street and the hip furniture shops.

Restobières in Brussels, Belgium
Place rating: 4.23 out of 5 with 7 ratings