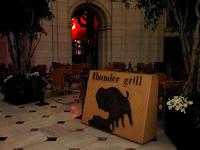 I ordered the Thunder Ale. It's a clear amber color with a thin wisp of off-white head (3.5). Sweet malt aroma with a little nuttiness, cough syrup and overripe sour cherries (2.75), which continues to the taste (2.5). Thin bodied with heavy carbonation (2.75). Pretty gross (2.5).

The receipt said "Killians Thunder Ale" so maybe it's contract brewed and/or one of Killian's regulars. I couldn't figure it out with a quick google, and I'm too lazy to add it as a new beer here only to pan it.

There used to be a bar in the center of the lobby/atrium area of Union Station that had somewhat better beers (think Devils Backbone Vienna Lager), but the problem with that place is that they consistently had either under-rinsed glasses and/or dirty lines. Beers always end up having a slightly soapy, mildewy aroma to them there. Effing nasty. That place is currently walled off under construction, so maybe it's being replaced. With all the money that passes through that train station, you'd think they could serve a few good beers somewhere.

Reviewed by hannahcc from Florida

2.85/5  rDev -2.4%
vibe: 4 | quality: 3 | service: 3 | selection: 2
This is a nice place at Union Station, I stopped in last night for a quick beer as they were listed on this web site. They had the standard fare on draft (Sam Adams lager, Miller Lite, Michelob amber, Yuengling lager). As I am not a lager fan, I asked if they had any IPAs or barleywines in a bottle. The bartender brought me their bottled selection: Peroni, Pilsner Urquell, and Guinness. I was underwhelmed. So, if you're looking for ales on draft and/or something interesting in a bottle, I would skip this joint.
Dec 15, 2009
Thunder Grill in Washington, DC
Place rating: 2.92 out of 5 with 2 ratings