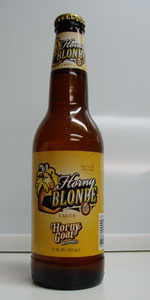 Reviewed by drpimento from Wisconsin

Reviewed by Duff_Light from Illinois

4.34/5  rDev +40%
look: 4.5 | smell: 4.25 | taste: 4.5 | feel: 4 | overall: 4.25
As promised, the CAN review gets top billing in this rare opportunity to review a CAN vs a bottle on the same day at the same time. The CANQuest (tm) is paramount in such instCANces and so we proceed acCANdingly. The approved pic is of a bottle, but if you CAN get a CAN, take note of how much better the graphics look on an aluminum cylinder! CANs win that test every time.

The Crack! revealed that the Goat squirts! I got a spray across my fingertips before I playfully turned her upside-down for an inverted Glug. She giggled and gave me just under three fingers of head before falling back down. The color struck me as being just a shade lighter than from a bottle, like Straw-Yellow (SRM = > 2, < 4), but still with NE-quality clarity. Nose held a little more intensity in terms of the honey-like sweetness, but it was still clearly a bready lager. Mouthfeel was slightly fuller, medium-to-full, but not quite creamy, unlike the Goat's thighs. The taste was somehow fresher, more pronounced than from the bottle. Here, I was able to taste the grassiness of the aforementioned German hops. Finish was semi-dry to dry with the hops actually asserting themselves at the end. Once more, CANs win! Yay!

Well now, between my (recently departed for the winter) local, in-person trader, tone77 and I, this is the rare opportunity to do a back-to-back bottle vs. CAN review! I am going to start with the bottle and push its review to the bottom so that the CAN review (the more important of the two) will be on top and immediately visible to those with an interest in The CANQuest (tm).

From the bottle: "Bright Blonde Lager"; "Craft Brewed in Wisconsin"; The Goat depicted has horns, blonde hair, long eyelashes and large (ahem!) udders. At first, I thought that the Goat was in drag, but females may also sport horns. Fair dinkum! Although, if it is mating season, I will not be around.

Rated by LarryZ from Illinois

2.31/5  rDev -25.5%
look: 3.75 | smell: 2 | taste: 2.25 | feel: 2.5 | overall: 2.25
Date: August 9, 2015... Glassware: Cleveland Browns pilsner... Occasion: post geocaching relaxation after my birthday... Appearance: pale, tawny body with large bubbles throughout; white, spongy head that has solid retention and maintains a cloudlike ring--surprisingly alluring ...Aroma: nice wheaty esters hover over some pale hops and lager malts--tough to actually hone in on a predominant scent; some oddball spiciness--not clove or corn, but off-kilter... Palate: oily, thick and coating despite its purported blondness... medium-bodied, somewhat refreshing and somewhat substantial... Taste: slight bitterness, with some sweetness as well; honey and bready malts are the distinguishing features; overall, a nondescript lager with little to suggest its blond aspects... Overall: not much difference between the Horny Goats I have had...maybe the others in the summer can mix pack can separate from the others; does it at least refresh on a nice summer afternoon? perhaps, but I would not seek this out again...
Aug 10, 2015
Rated: 3.75 by paulish from New York

Reviewed by Brian_L-2056 from West Virginia

3.3/5  rDev +6.5%
look: 3 | smell: 3 | taste: 3.5 | feel: 3.5 | overall: 3.25
Nice, clean, crisp tasting blond lager with light finish. Pours light golden color, with thin, pale white head. Very little carbonation so might appear a little flat. Plenty of initial flavor with smooth slightly dry finish. Could drink this all day long, unfortunately it just doesn't quite separate itself from others as far as taste, but all in all a good beer.
Jul 08, 2015
Rated: 3.64 by 03fatboy from Wisconsin

Rated by TopherBreski from New Jersey