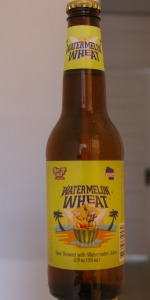 Notes:
View: Beers
Reviews: 29 | Ratings: 175 | Log in to view all ratings and sort
Reviews by woodychandler:

My local, frequent in-person trader, tone77, recently dropped this off for me in his latest batch of beer in support of The CANQuest ™. I am always anxious to see what he has for me when he stops by!

I had a good time when I heard the Crack! and looked in to see a brimful CAN. I celebrated my elation with an inverted Glug which resulted in two brief fingers of French Vanilla-colored head that quickly fell to wisps. Color was solid Gold (SRM = 5) with NE-plus quality clarity, allowing me to see into the future. Beer is in my future, apparently. I invited my new friends, Mammon, Midas and Croesus for some, but they declined, saying that watermelons and goats just are not their bag. I understand CANpletely! Nose was light on the watermelon and I believe them when they said “Beer Brewed with Watermelon Juice”. It was not over the top, cloying or CANdy-like, all of which are the results of artificial flavoring. Mouthfeel was medium. Going back to what I was saying before, this had a nicely understated watermelon flavor. I agree that the grassiness of their hops was a nice CANpliment and the wheat and malt kept it all in check. Finish was semi-dry, not really all that sweet, as I have been alluding to all along. It was a bit high at 5.6% to be sessionable, but I would definitely put some in the Summer cooler for people who don’t dig my first choice of AIPAs.

From the bottle: "Craft Brewed In Wisconsin"; "Beer Brewed with Watermelon Juice".

My initial pour created a two-finger pillow of fluffy, bone-white head with decent retention. Nose had a light scent of watermelon, which was nice, because I have had these types of beers where the watermelon was overpowering. I remember my babysitter neighbor and her friend once doused each other with watermelon perfume before spending the night with my brother and I. Gag-O-Rama! Color was an oh-so-slightly hazy golden-yellow and only King Midas showed any interest. Mouthfeel was thin-to-medium and the taste was just right - watermelon, yes, but not cloying or overpowering. It tasted like real watermelon, not something mimicking the flavor that came from a laboratory test tube. Finish was semi-dry and the watermelon taste just kind of lingered, a pleasant reminder of summer days gone by.

(Served in a flute)
A- This beer pours a hazy hint of the lemon yellow body with a thin snow white film supported by a sluggish big carbonation.

S- The clean aroma has a light corn chip hint as it warms.

T- The clean light lagered field corn note leads to a green biter note that lingers. There is a watermelon rind hint that leads to a jolly rancher flavor comes through in the finish.

M- The light mouthfeel has a crisp little fizz in the finish.

O- This beer has an interesting watermelon note but it is a bit harsh in the bitterness in the finish without other flavors to support or cut it.

With no hint of watermelon to its appearance, the American pale wheat beer carries a light haze into its pale straw hue. But once the nose draws near... there it is- watermelon! True in its natural form, that succulent aroma invites the first taste in rapid succession. Sweetened with grain, wheat and and mild toast; notions of light bread, savory toast and fresh-kilned grain gives a cereal taste early on.

As the watermelon simmers beneath, the middle palate opens with a mild lemony tang to complement the toasty, bready center. Where the flavor of the distinctive melon is present, it does so without the associated sweetness of the fruit to render it more natural in taste and less candied.

Crisp and grainy, the ale thoroughly quenches the thirst with its medium-light body that trends drier and more refreshing as it nears finish. Its playful acidity keeps the palate refreshed beyond that of its light grain astringency and tepid hop bite. But once the memory of the taste has passed, another wave of whole-grain wheat and watermelon come rushing back to reward the palate one last time in a charming afterglow.

Where the watermelon fruit is rarely considered seductive, it turns out that the palate is smitten by the melon taste of this beer. The bottom of this glass came way too soon!

12oz bottle. Poured out a clear, golden color with a small, white head of foam. It smelled a little like watermelon Jolly Ranchers. Sweet with a strong watermelon taste.

Pours a hazy, golden color. One inch head of a white color. Great retention and great lacing. Smells of sweet malt, pale malt, sugar, and slight hops. Fits the style of an American Pale Wheat Ale. Mouth feel smooth and clean, with an average carbonation level. Tastes of watermelon jolly rancher (not actual watermelon flavor at all), sugar, hint of hops, slight sweet malt, and a hint of wheat. Overall, artificial flavor and no watermelon in the aroma creates a subpar offering.

DATE TASTED: August 14, 2015 ... GLASSWARE: 22 oz. Weizmann... OCCASION: watching The Hobbit as preparation for the school year... APPEARANCE: bright, misty, densely obscure orange body; head is off-white and thick at first, but settles to a few random slivers of uneven strands... AROMA: odd, funky notes that stray from the banana and clove promised... Instead, a sharp, cloying aroma that is musky and somewhat unpleasant... PALATE: fizzy, oily and smooth to the tongue; leaves the aftertaste that holds its dank citric warmth in the end... TASTE: the pineapple is bolstered by pear and apple, with mango and banana also lending service... the overall effect is flavorful, but the pineapple juice is almost crushing and obtrusive in its presence... OVERALL: the Laka Laka delivers it’s pineapple promise, and refreshes with a reasonable levity... Fruit beers are not my thing, and this leaves some rather blunt edges, but poolside, this beer might be in its element....

Pours a golden straw color. A good amount of carbonation creates a thin white head that laces throughout the drink.
Aroma is very clean. A nice crisp wheat smell with nice malt backbone.
Taste is very nicely balanced. A good malt and straw wheat base. The watermelon hints come in at the end. They are very undertoned, which is great for someone who isn't a huge fruit beer guy (me).
Mouthfeel is good. A nice amount of thickness and smoothness. Not as crisp as the usual refreshing summer beer.
Drinkability is very good on this beer. A very nice balance and dry finish leaves the palate wanting another sip. Very good beer to complement the summer season.

A: Pours a clear medium golden yellow in color with moderate amounts of active visible carbonation rising fairly quickly from the bottom of the glass and some faint lemon yellow highlights. The beer has a two finger tall sudsy foamy white head that slowly reduces to a medium sized patch of medium thick film surrounded by a large patch of very thin film covering the majority of the remainder of the surface of the beer and a medium thick ring at the edges of the glass. Moderate to heavy amounts of lacing are observed.

M: Light bodied with moderate to heavy amounts of carbonation. Initially this beer is quite crisp but overall it is slightly thin.

O: I enjoy a watermelon beer that does not have an overpowering watermelon jolly rancher type flavor but this one was just a little too subtle for me (and I used to drink a lot of fresh watermelon juice when visiting India for work) as I wish the watermelon came through a touch more. Easy to drink and refreshing.

12 oz can poured hazy copper-amber with a sizable bubbly head.

Mild but appealing aroma is bready with a hint of fruit.

Pours a peach hued copper with a fizzy white froth that leaves quickly. Aroma of sweet grains and a hint of watermelon, or at least fruit. In the taste, grainy and lightly malty upfront gives way to a definite watermelon note that follows to the finish. The watermelon flavor reminds me of slightly unripe melon. Light to medium bodied, well carbonated yet watery feel. Overall an ambitious beer, that succeeds at its ultimate goal. In the increasingly popular fruit beer genre, this is one of the better watermelon ales I've had to date.

Smells of grassy barley malts with a light citrus and mild semi-sweet fruitiness.

Light to medium body with a soft carbonation on the roof of the mouth.

A nice light session-candidate wheat ale, great summer beer, goes down easy, good flavor balance, surprisingly good body. Unless you object to the melon element, this is hard to knock. Not a superstar beer, but well worth trying.