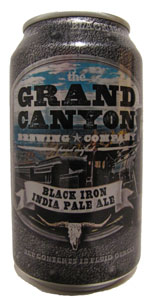 Picked up in the Grand Canyon National Park. Had lots of good craft brews in the General Store, this one was a new rate for me so I picked it up.

A: Pours rather pale yellow hue with a nice white head. Pretty good retention that dies to a ring. Nice retention and some spotty lace.

T: Not aggressive at all. Nice sweet bready malts up front. The citrus hops are there with hints of bitter zest. A touch of herbal hops add some bitterness in the finish.

M: On the lighter side of medium, a hint of bitterness in the finish.

This IPA from Arizona pours a hazy copper straw color, a fair amount of sediment floats in the glass while a nice 2 finger head sits atop the beer. The head has pretty decent retention and ample lacing on the glass. The nose is pleasant, a bit weak, lots of lemongrass in the nose with some slight biscuity malt backing, not much in the way of bitter hops, more of a lighter sweeter nose. The flavors match well, mild hop profile which is earthy and hazy, some bright citrus come through that leads to some light bready malt. The flavors and aroma are very simple, but still pleasant and well done. The body is nice, a bit bigger than I anticipated, can definitely notice the sediment, which isn’t a bad thing by any stretch.

Verdict: Simple but good IPA from Grand Canyon. I could definitely do with a 6 pack of these on a warm summer day.

No date on the can.

Appearance: Opaque orange (they must dry-hop the hell out of this, or not consider leaving the sludge out when they can) with a huge off-white head that filled the entire pint glass with only about an ounce of beer at the bottom.

Aroma: Strange. Sweet citrus with a chemical edge to it. Grainy sawdust.

Taste: Very sweet tangerine hop character up front with a bit of spice underneath. Some caramel malt flavor and good grain taste but not much malt presence considering the moderate 7.2% ABV. Decently balanced, I'd guess about 70-80 IBUs. Honestly, the appearance and aroma had me worried but the flavor is actually pretty good though a tad on the sweet side which gets cloying about halfway through. I intend on leaving the appearance and aroma scores as I originally graded them but needless to say the flavor is much better than they would suggest.

Mouthfeel: Just below medium in body with surprisingly normal levels of carbonation considering the near explosion when I opened the can (it had been sitting in the fridge undisturbed for almost a week). Good drinkability.

Final Thoughts: With a name like Black Iron IPA, I was half expecting a Black IPA. Though it wasn't dated, I'm thinking this one's pretty fresh because the sweet hop character hasn't morphed into something astringent yet. Would I drink it again? If I'm ever in AZ I'll give it another go on-tap.

pours a deep burnt orange with a thick, fluffy off white head with great retention and lacing.
nose is light pine and grapefruit with a touch of malty sweetness.
taste is a slightly twangy, a touch of grapefruit and citrus. medium bitterness
lingering twang