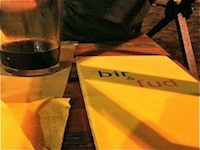 View: Place Reviews
Reviews: 25 | Ratings: 50 | Log in to view all ratings and sort
Reviews by Beervana:

Laid back, cool spot with local Italian beers on tap. Worth checking out for sure if in Rome.

Bir & Fud is a quaint little craft beer bar / restaurant in the Trastevere neighborhood of Rome. We ate dinner there on a Wednesday around 6:30pm so it wasn't crowded at all. Main restaurant seating is in the back ... handful of tables outside, which seem always occupied (but for good reason - great people watching). Front of the restaurant is a long narrow space which is where the bar is located). Bir & Fud has a very solid tap selection ... definitely one of the better ones in Rome. Food was average ... wasn't really wow'd by anything we had. Service was solid ... prices were fair leaning to a bit high. There's wifi so that's always a plus for the kids. Mostly locals here, which is a good thing. Pro Tip - if you go to Bir & Fud, make sure you visit my favorite craft beer bar in Rome, Ma Che, which is located directly across the street.

My second stop along Trastevere's beer bars. Bir&Fud features a wide selection of beers on tap. Most are local with the odd Belgium or German thrown in. Service slightly innatentive (hey..it's Europe though) but friendly and knowledgeable. Cool looking space, food looked decent (I didn't have) and the beers I had were good. Really happy to see a thriving craft beer scene and good local beers in this beautiful traditionally wine city. I will definitely visit again.

Bir & Fud is in my favorite neighborhood of Roma, Trastevere, just below the Ponte Sisto on Via Benedetta, and right next to Birreria Trilussa and across the street from Ma Che Siete Venuti A Fà (which may have similar ownership, or maybe ties). I could skip Birreria Trilussa (boring beer), but seeing as how it's right across from Ma Che Siete Venuti A Fà the area becomes a destination. Keep in mind it's a small area, they're just a stone's toss apart from each other; and if you're interested Bierland Trilussa is right down the street by the bridge as well.

The food at Bir & Fud is very good and I'd recommend it as a place to eat. You could stop across the street for a beer either before or after, but keep in mind that Ma Che Siete Venuti A Fà is very small and will start filling up around dinner time. Bir & Fud will get equally full as well, so go early.

Another highlight is the decor. It's kind of cavernous with a long bar that's pretty tight to the wall beneath a vaulted ceiling before you get back to the dining area in the rear. That's good because it keeps the bar and dining separate, but it's hard to get out when you're through! It has a little bit of what I consider a Spanish feel, and there are modern fish-shaped wooden structures or sculptures on the walls and ceiling. The lighting also gives it a bit of a cave-like feeling with an underlit bar and a few small lights hanging from the ceiling. At one point I thought of the Mos Eisley Cantina scene from the first Star Wars movie. The bar top is a light wood, and the tap towers are encased in amber glass. It's interesting to see, and probably worth a stop for a beer just to see it (if you're into that kind of thing).

The beer selection is quite good, without any crap on tap, and they have cask beers which are pretty rare in Roma. I doubt that anyone could take exception to any of the beers, and as an added bonus, they seem to be completely different from the beers next door and across the street.

The one drawback is the service. It's not good. It's unconcerned and slow, which is not something that I've found in Roma despite some stereo-types of that. What I've experienced has been the worst in all of Roma, and quite surprisingly, all of Europe (while there is a tie with a place in Prague that I won't bother to go into). On the upside, which gives them extra points, is that they are extremely beer-knowledgable - but that only helps when you're there early and the bartender has a chance to talk to you.

Excellent food, decent beer selection, good location within easy walking distance of city center, shuttle dropoffs, and many tourist attractions. Service was lacking but the Zucchini flower/lardo pizza was to die for! And they had the only truly hoppy beer I found in Rome.

I stopped here three times during my recent trip to Roma. Every visit was great.

They have a small outside space that always seems to be filled. People just spill out into the very narrow one-way street. The atmosphere outside lets you know you are entering a special place.

As you enter the long narrow front room, the bar is on your left. They have a great tap selection of local craft beers that will entice you. There are multiple bartenders, so I never had to wait more than a minute or two to grab a refill.

The staff is excellent, friendly, and beer savvy. Everyone I encountered could take your order in English.

The back room reminds me a bit of a green house. Same shape and lots of glass.

The food is excellent. Great pizzas, salads, etc. I had my wife and all four of our kids with us and this was one of the favorite spots we ate at.

While they attract crowds, I was always able to get a seat and a beer. The crowd is friendly and for the most part willing to engage in conversation. The perfect example of how good beer can really bring folks together.

Surprised by the large number and quality/variety of taps. Appears to be some serious beer nerds running this joint.

I went during the early afternoon on a Monday (stayed between 4-5:30pm) - sat at the middle of the bar. The place was pretty chill during that time of day. It's a large layout that stretches out into a larger room in the back with a good number of tables. Tables also out front on the lil side street where it's located. I could imagine it and the general area being a zoo at night and on weekends, but probably pretty fun.

I was told by another American at the bar that you really have to track down the bartenders to get served. I suppose it all depends. Probably more true when the place is jumpin'. Since this is in the university district (in which many Rome branches of American universities are located), the staff speak English quite well and conduct themselves rather calmly and professionally when serving American tourists, who probably expect the locals to immediately engage them in English - I would assume they make the bulk of their clientele. I, at least, attempted to first tell them in Italian that I couldn't speak their language well, and the one bartender told me he couldn't speak it well either. Joke appreciated. I did attempt to ask a few simple questions of them in Italian, to which they were receptive and helpful, replying in English.

I had a fish sandwich, "Big Fish", which was remarkably tasty, if unconventional, being served unbattered and packed together like lump crab meat, on a roll that tasted and crumbled a bit like a southern-style buttery biscuit. The sandwich came with a simple side salad of cabbage and carrot crudite, which may or may not have also been mildly pickled. The meal was altogether pretty delicious, if arguably not quite worth the 13 Euro price tag.

The tap list featured many Italian breweries but was also balanced by a good number of British craft varieties and some Belgians, of course. Quite a few Italian and British IPAs, several of them in an American style. The three beers I had were a Kellerbier (German), a saison brewed with chamomile (Italian?), and a lil nip of Xyauyu (from the bottle). Didn't bother checking to see if they had a bottle list. Glasses were spotlessly clean, as was pretty much everything else.

And that's about it. This joint is a touch on the pricier side, but I would without a doubt revisit it next time I'm in town. They apparently have a sister bar across the street, which I unfortunately didn't have the time or dough to check out. Always next time.

Absolutly loved this place.
Down toward the edge of the river, not far from Haydrian's Tomb, lies this little pub/eatery. Seems to be a rather busy place. Good atmosphere with three options for seating: at the bar, outside, or in the back.
Plenty of beers on tap that rotate out daily it seems. Lots of Italian craft with the odd German, American, or English thrown in.
Had the pizza and it was delicious. Thin crust loaded with great, flavorful topings.
A wonderful experience, so good I went twice. Highly recomened.

Was on vacation with my wife and walked by this place. Saw all the beautiful brass taps, and got super stoked. I had no idea Italy had delicious craft beer. This place was wonderful. Had a delicious Birra del Borgo Re Ale and a Duchessa on draft then stumpled around Trastevere. Very rad!