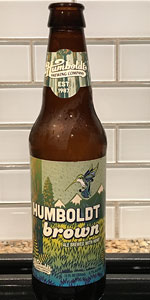 Poured from a 12 oz. can. Has a very dark brown color with a 1/2 inch head. Smell is of malts, light hemp. Taste is malty, lots of dark breads, a touch of sweetness. Feels medium/full bodied in the mouth and overall is an easy drinking and enjoyable beer.

The can is 5 months old so it's not very fresh but it's still drinkable. I get some mild hops on the aroma. I get some dankness on the taste along with some roasted malts. It's a decent brown ale & worth a try if you can get your hands on this beer. Cheers! B

Has a bitter aftertaste that lingers far longer than it should. It could be because I'm drinking it at cellar (garage) temperature rather than from the fridge.

Poured into a mug, the appearance was a pure milky looking brown color with a finger's worth of white foamy head that quickly slid off to leave barely any lace.
The aroma had some sweet earthy to "hemp"-like dried danky to grassy rolled character rolling over some citrusy to piney hops. Light notes of chocolate and a touch of yeastiness enter in at the end.
The flavor was semi-sweet to bitter through the blend of the prior notes. Light aftertaste of the dankiness with the citrus, pine and chocolate.
The mouthfeel was about medium bodied with a fair sessionability about it. Carbonation felt fine. ABV felt on par. Light finish of citrus, hemp, dankiness and milk chocolate.
Overall, pretty good as an American styled brown ale. Possibly could have again.

Look: Deep brown in color. A one-finger khaki colored head rises to the surface.
Smell: Malty, sweet, with faint notes of chocolate.
Taste: Malt forward with a subtle cookie dough presence. Not that impressive in the flavor department.
Feel: Soft bodied, somewhat undercarbonated.
Overall: Not terrible is about the best thing I could say about this beer.

Exceeded my minimal expectations. Hemp adds a grassy not, but overall a decent English style malty brown ale. Not great, not terrible, good option in a pinch

Pours a Coca-Cola brown with a frothy off white head that dissipates rather quickly. Has a caramel or molasses smell that reminds me of the old Goose Island Autumn Ale. Initial taste is smooth and sweet, with definite caramel flavor and pleasant throughout, with a slightly dry finish. I don't care what others have rated this brew but I could drink this all day until the sweetness became to much for my tastebuds

I guess they ran into some problems with some governmental regulatory body over just calling it hemp ale. Fucking California.

Appearance is a mix between dark copper and light brown. Ruddy. Off white 1/4" head. Aroma of earthen brown malts.

Taste, eh, its a brown ale. Nothing offensive, nothing noteworthy. Unsweetened toffee, shitty grandma "candy" kind of vibe. Goes malty and nutty all over this one. In terms of hemp, it appears to add nothing to the beer beyond marketing purposes. There's a bitterness there that doesn't seem hop derived, but at least it gives the beer some oomph.

Almost exclusively spent grain on the nose like walking up to a large lager brewery. There is also some nuttiness.

The taste of this beer is big and heavy on the malt, with some toffee notes as well.

Smells like not very much "hemp" IMO, but more of a toasted malt complex and full bodied grains. Not very much hop annunciation either.

I taste a very well made brown ale. Nothing more, nothing less. The only remnant of "hemp" flavor comes towards the end and it isn't very noticeable.

The mouthfeel here is medium-light with mild carbonation.

I like finding under-rated beers... it reminds me that I follow the beat of a different drummer.
Being a California hippie in the 1970s (I was in my twenties, just to date me), I suppose nostalgia makes me like a brew started on the Mendocino Coast (a hippy hot-bed) and then uses the marijuana plant.
But nostalgia is neither a big motivator for me, nor why I like this beer.

It has an interesting history. This modest second generation brewer has gone through a few relationships (Firestone Walker being primary as their current base of operations) and now owned by a beer and wine importer. Breaking the business model of the brewpub, Humboldt has built some healthy relations in the distribution chain. (Experimenting with the business model may be as important as experimenting with recipes in the coming period when America's 3200 craft brewers have to sort themselves out.)

Oh, yes... about the beer...
I like American editions of British styles that stick more closely to the originals (largely that means, "don't go crazy with the hops".) Humboldt Brown actually reminds me of how British Browns blend the malts so the taste buds continue to salivate as the beer warms. The hops and other spicing never take over. I like being left with the taste of malt.

This beer was listed in the "1001 Beers" because of its unique owner and because of the special ingredient (the stuff that gets you high from marijuana actually is not in this beer.) Should this be on the list? Yes, because of its story and its following in what I call the "Anchor tradition" of making minor innovations from the masters instead of extreme leaps.
Let us all praise moderation.

Good look, had great head retention and nice brown color. Smell of toasty malts. Toasty malts not overpowering but there with a malty finish. great flavor overall and would recommend.

No hemp flavor to speak of. Decent enough brown ale. Looks great and taste okay. I drank all 6 over 2 weeks but mostly because I didn't go to the beer store. I actually drank a bud ice before this. If that counts for anything.

Had this in the bottle at a function. Match look score to smell. Beer was creamy, smooth and had an excellent balance of classic brown flavor. Enjoyed this beer very much!

Deep brown with deep red hues. The head was minimal and disappeared quickly. The nose is grainy, toasty with a bit a caramel sweetness distant metal tinge. Again the taste is grainy with roasted oats and a bitter burnt type caramel finish. Feels good. Smooth with pleasant carbonation. Over all not bad. I really enjoyed this one. Might even pick it up again in the future.

Very smooth. Very different from anything I had before. The color looked like a standard brown ale and there wasn't a really distinct smell from what I could gather. Taste wasn't bad, but isn't something I would crave a lot. Good beer to mix it up with, but not something I would consistently buy. Worth buying if you want to try something unique.

For the most part I'm generally disappointed with American Brown Ales. No exception here, either I really hate the taste of hemp or this is just a bad beer. Bitter with a poor mix of hops and malt.

Pours a medium brown color with a white head. The aroma is full of caramelized malts and a bit of herb, The taste is malty but with some herbal, seedy, rooty flavor from the hemp. Bitter and rooty, with a nice nutty malty sweetness. Even a hint of fruit finds way across seed and grain. Medium bodied, well carbonated, enjoyable and drinkable. Overall, a very good ale. Ya Mon!

Poured from a 12 OZ bottle into a pint glass. Aroma- Has a malt and barley smell Appearance - Pours a dark brown with a large white head Taste- A bitter tasting beer that has a slight coffee taste. Palate- A medium bodied, moderately carbonated beer. Overall- A fair beer that I would drink again.

Poured a brownish, dark caramel, mahogany color with 1-to-2 fingers of tan head. Good stream of bubbles coming up from the bottom throughout the glass. Head settled nicely after originally appearing to dissipate. Minimal lacing along the sides of the glass. Minimal retention on the top all the way down. (Sight - 3.00)

Smelled light chocolate, roasty malts, toffee, caramel, light menthol, chocolate milk and faint Citra hops. Was tough at times to get anything on the nose. (Smell - 3.50)

A ruby red sea is capped with a foamy, tan froth. Has a caramel, nut, help and medium fruit aroma. Tastes sweet and smooth with some grain, candy and fruits that mingle with a metallic nuttiness. Somewhat mineraly in the aftertaste. Reminds me of Pynchon's Vineland for some reason... A true underdog beer that deserves better than it's lot.

Purchased from the Wolf Stop in Aberdeen, SD. Poured into my new Miller Pilsner glass.

Appearance (4) : Pours a dense, creamy three fingered head with a nice creamy cap on top. Body is dark honey brown with about 70% opacity. Leaves lacing on the glass and a memory foam like appearance complete with a couple of "finger poke tests", on the head.

Taste (3.75) : Coffee bean bitterness hits first, mixed in with some barley malt. Behind that is a grapefruit bitterness, which follows through to the finish. Faint honey and ginger notes float around in there, too. I was not expecting the bitterness that came from this beer - in fact I was expecting a malt-forward brown, but actually the flavor isn't bad at all. It's quite enjoyable. Belches taste like wheat chex.

Overall (3.77) : This brown has hop presence, there's no denying that. It's a good beer overall. I don't think I'm swayed enough to buy a six pack, but it is a pretty decent beer. I would have it again if offered.

Humboldt Brown (Ale Brewed With Hemp) from Humboldt Brewing Co.
Beer rating: 79 out of 100 with 672 ratings