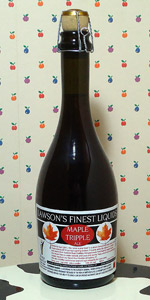 Notes: Enticing, rich and complex, this creation defies easy description. Our 'once-a-year beer' is brewed only during sugaring season with 100% maple sap from our friend Paul Marble in Fayston, VT. No water added! Just barley, hops, and ale yeast.
View: Beers | Place Reviews
Reviews: 72 | Ratings: 458 | Log in to view all ratings and sort
Reviews by Amity83:

Got to try this at the VT brewers fest and then brought a bottle home. It's loaded with VT maple character and is refreshingly different. Any maple strong ale is bound to have a touch of syrupyness to it(new word coined). Drinking it I was overwhelmed with flavor without simply felling like this was a beer someone simply poured a ton of maple into. The maple flavor tastes natural and brewed in rather than added afterwards. I could not get past the sweetness however natural it tasted though. I ended up trading my bottle for a 4 pack of Second Fiddle IPA from Fiddlehead... One of my favorite beers. For those who like maple and sweeter beers, you're in for a treat, but the rest of us will trade bitterness for sweetness any day.

500ml bottle of the 2013 vintage, generously extra'd to me and Doug by FleetwoodMatt. Poured into a Hill Farmstead stemmed glass today, 12/4/2013.

Pours what I expected a maple syrup beer to look like. Amber brown, clearish, with a relatively effervescent white head measuring some 0.5-1cm that disappears quickly. When the head is gone, this really looks just like maple syrup, like Aunt Jemima or something.

Smells phenomenal. It's sweet, but in an unique way. It definitely evokes maple syrup, but in a different way. Its more like if you had maple-flavoured candy- its sweeter than maple syrup, but has that maple character to it. Its very strong in the nose and very unique. I am really digging the nose.

The taste of this beer itself is actually quite interesting. Very sweet so its a sipper, but its sweet in an unique way that doesn't really have an exact correlation in my tasting dictionary. It's sweet in a syrupy way, but its not maple syrup sweet. It could be a malted barley contribution. There isn't much bitterness in this one at all, either. Very unique but not a profile I could drink more than once a month.

Fantastic, full bodied mouthfeel that actually is resinous as I would expect a maple syrup-based beer to feel like. Its so damn sticky and drinkable. I was surprised to see that it is a 12% ABV beer because there is zero indication of it. Really, really well-crafted in this regard.

Such an unique beer, the concept behind it is really cool. Authentic Vermont maple syrup used to make beer instead of water. Its sweet and syrupy on the mouthfeel, which is what I expected. This is a really cool novelty that I don't think I would want more than 6-8 ounces of every year.

bottle 1210/1500 from 2013
The beer pours a dark hazy amber (no chunks of yeast) with a thin halo of white head around the perimeter. The nose is sweet (unexpected notes of lactose-like dairy sweetness?), distinct maple and yeast, minimal alcohol, no bitterness. The taste is maple forward (as hoped) with a hint of fruit and yeast, and a slight bitterness in the finish (more woody than hoppy). The mouthfeel is medium bodied, slightly syrupy (some carbonation, generous sap sweetness), but not chewy, has smooth maple goodness, masked alcohol, and a slightly dry bitterness in the finish. This beer is fantastic to drink, especially if you're a maple fan, but I'll have trouble justifying the price again in the future.

I attended a beer info session with Sean Lawson at the Vermont Brewer's Festival in Burlington, VT this past July 2010. At the session, Sean Lawson gave out samples of his Maple Tripple Ale which he stated was brewed with 100% pure maple sap. The beer sample was paired with a gorgonzola cheese. The beer was an amber color and had a strong aroma of maple which overpowered any other scent coming from the beer. The alcohol was well-hidden with this beer. The beer was a bit thick to the taste and was sweet, but not as sweet as the strong aroma of maple would imply. The taste was very unique and very good. It is quite the beer treat and I highly recommend trying it if given the opportunity.

Scooped this up on a trip up north last month and just cracked it. WOW! It’s very smoothe. The maple is perfect. Maybe my favorite from Lawsons, it’s close with TS.

T–the Maple Tripple dances on your entire pallet, engaging every taste bud. Maple sweetness is joined with slight malt and yeast flavors and the beer finishes with a hint of relative bitterness. It was very sweet, but never cloying. It was extremely complex, but never muddled. A display of incredible brewing finesse.

M–A perfect viscosity, that coats your tongue long enough to savor each sip. It wasn't syrupy or heavy though.

O–By far the best beer I have ever had. It is most similar to Avery's 2011 Beast but it somehow avoids all of that beers small imperfections. The beauty of the beer is the complexity that comes out of its simplicity. It has 4 ingredients (concentrated maple sap, barley, yeast and hops) and they come together in a way that surpassed my very high expectations