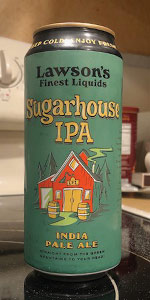 Notes: Inspired by the first recipe crafted in 2008 at our home-based nanobrewery in Warren, VT. This hop-forward American IPA celebrates the "Sugarhouse Brewery" that is now our wizard's workshop for experiments and taproom-only specials.
View: Beers | Place Reviews
Reviews: 39 | Ratings: 131 | Log in to view all ratings and sort
Reviews by SierraNevallagash:

Pours a very clear, but not crystal clear, dark copper hue. Penny colored. A finger of very fluffy white head sits on top for quite a while, slowly slinking down leaving very sticky lacing.

Nose is rather weak and unremarkable. Vaguely malty, vaguely hoppy, nothing to write home about. Smells like a watered down Lagunitas or Sierra Nevada Pale Ale. Hint of pineapple. Pine is really the key note here, with some very light citrus.

Palate : this is a suuuper West-Coast-style IPA. Dry and bitter, thinner and crisp, tannic and loud, without any real hop complexity at all. It's just...bitter. it's a bitter IPA. Man, did I have a COMPLETELY different idea in my mind of what this would be. I'm surprised this is from the same brewery that does Sip of Sunshine. That's such a great beer, and this is just a bitter mess. I'm trying to pull notes from it, and I just can't. Some caramel malt. A little bit of catty, a little bit of grassy onion, a tiny bit of grapefruit rind, and a whole hell of a lot of pine resin bitterness. I'm wondering if this is hopped with Summit. Those catty/grassy/onion notes just scream Summit to me. Not sure. Maybe even some Amarillo or Chinook character too. Can does not state. Massively bitter finish lingers on and on and on. Not a fan of this one. A West Coast Imperial IPA drinker might enjoy this, but I cannot.

Mouthfeel is light and crisp, with a strong effervescence. Drying towards the end, but not completely, because it's rather sticky up front.

Overall, pretty disappointed by this one. I get that it's a west coast style IPA, and that's perfectly fine. The problem is that it's not even a good west coast example. It's just unrefined and sloppy, and boring. The intense bitterness masks any and all nuance that you could possibly get from the hops. I don't know. Not my thing. Somewhere, someone loves this.

This is delicious. Had from a can into a tulip. One of my favorites from lawsons. s
Second only to chinookered. Better than double sunshine as an IPA in my opinion.

On tap at the brewery

Pours clear copper with a full head of white foam. Nice retention and lacing. Light pine and faint grapefruit in the nose. Medium bodied with a slightly tacky, crisp mouthfeel. Sweet malt up front on the palate with a piney bitterness following through. Finishes piney with balancing malt and a firm bitterness.

This is old school west coast style and the hops are quite subdued by today's standards.

Thanks Michael, Beer served in a tiny ticker snifter designed for one thing....ticking.

Beer is orangish, light with a little haze, some white head but low retention, no real lacing, low carbonation.

Hmmm....the flavor lets me down a little bit. It is hoppy but not hop forward. It is a little grainy and thin, the beer is overall bland and plain. From Lawsons I expect more (and that's a compliment).

Quite the looker here. Deep hazy orange in color with a creamy, thick cream colored head. Leaving thin lace around the glass and a thick foam topping.

Hops become more citrusy in the mouth. A bit astringent on the finish. Light residual surags. Pine cone, caramel, lemon, lead, apricot, peach, flowers, loam and more. Resiny and gritty on the long finish. Carbonation is odd in the middle needs to be heavier.

A treat from the Northeast Kingdom. Love the new generation of Vermont brews!

Nose is sharp pine and citrus. Simple and perfect.

Flavor is dominated by the piney. Love the Columbus and Amarillo combo. Low on the malt and heavy on the hop, just the way it should be. Not that sweet and not all that citrusy, it's a smooth, strong pine-bomb.

Mouthfeel is zesty and tingling, but with fairly low carbonation. Tooth enamel is in danger here. Love it!

Overall is very high. I really like the smooth drinkability coupled with significant hop-loading. Lots and lots of flavor for only 6% ABV.

Pours a hazed, but clear golden copper with a large, frothy white head that settles in to a layer of bubbles and light lacing. Aroma is juicy and hoppy, with light lemon, orange, and mostly Amarillo hops. Flavor has a strong grain malt body with juicy Amarillo hops in the finish. Medium light body with strong carbonation. An excellent IPA, but just makes me miss Double Sunshine.

A - A finger-plus of white creamy foam settles to a thick cap and splotchy lace. Hazy dark peach body.

D - This was alright, but it's not one of Sean's better offerings. More Double Sunshine please. I'd drink this if offered, but definitely not one to seek out.

Bottle shared by yourefragile. Thanks Michael.

The beer is mildly hazy and light orange hued, sporting an inch of fluffy, white head. The aroma offers some hop and citrus character, particularly oranges. Good flavor, with a healthy amount of bitterness throughout. A bit of citrus lingers in the aftertaste. Light bodied with solid carbonation. Overall, pretty good stuff.

Thanks to imagineiii for yet another bottle of Lawson's goodness. Spring has arrived in Minnesota after 19 months of winter, so I'm going to celebrate with a promising IPA. Split with my wife. Batch #195, bottle 29. Love that every bottle is signed by the brewer, very cool.

Sugarhouse IPA doesn't live up to the bunch of fantastic Lawson's IPAs I've had to date. The hops are muddled: citrus, pine, mixed in with damp, post-rain earthiness that really detracts from the punch. Bread crust is in the mix...but whatever else is here, it's overwhelmed by the dank darkness.

Not wild about this, it's lacking in the bright hops IPAs are all about. Just OK.