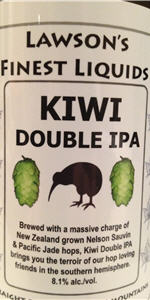 I love me some Kiwi hops, and I know Lawson's will do it justice, so I've been dying to try this beer. Thanks Pemmet!

Nose was wafting out as soon as I popped the cap, great kiwi hops, little tropical almost, grassy and earthy mostly, with a touch of a lemony straw, and a bit of a musty aroma. Under that is a hint of a nice malty sweet aroma, hint almost grainy, fluffy, barely there but enough to support the hops it seems.

Taste starts again with the kiwi hops, nice grassy and a bit earthy, of the terroir, quite juicy with a nice citrus slightly tropical, and musty resinous like fresh wet hops, quite nice. Fluffy slightly sweet malt in the middle, with a hint of booze, and enough to give the beer a nice backbone, hint of caramel and toasty, and a nice carbonation to fill it. The hops get a bit grassy and a light lemony hay but not much, juicy fresh hops really take teh show. A decent bitterness throughout, not overly bitter but definitely lets you know it's there. Finish is drier, nice big bitterness ramps up a bit as it dries, plenty of lingering kiwi hops, light musty resin fresh hops, and a bit more citrus and tropical fruit juice.

Mouth is nice too, super fluffy carbonation and decent med bodied, slightest hint of booze so the beer has a big feel to it overall.

Overall very nice, as I was expecting. Showcases the kiwi hops very well, very tasty and drinkable, despite 8% it goes down very smooth, with nice malt base to prop up the hops, good bitterness enough to let you know it's a nice big IPA, but not overpowering. Well done!

Aroma is hop forward, redolent of apples and grapes, malt hidden quite well.

Fruity and complex flavors that remind me again of fresh apples and white grapes, nice bitterness at the end. Seems there are a few stages to the flavors as it dances gracefully on the palate right through to the swallow.

Another fabulous LFL double IPA that I have been waiting to try, and it did not disappoint.
Alpine Bad Boy remains my favorite IIPA that features New Zealand hops, but Kiwi is also a world class beer that is complex, and highly recommended.

Pours a deep golden hue, hazy but not in the Tree House/Trillium fashion. Not horribly aromatic. May be a touch of mango, if that. The mouthfeel is soft with a gentle cascade of peppercorny, resiny earthiness. It's substantial but dry. There's a little bit of heat. I wish it had a little more sweetness to play off of the peppery hops, but it's still good overall.

Received in trade a week or so ago. Not sure how old it is but everything about it seemed muted. Very faint nose and hardly any sense of the Nelson Sauvin hops(my absolute favorite). I think I'll need to revisit this one when I can guaranty a fresh bottle.

Poured from the bomber into a stemmed tulip.
Pours a hazy, medium amber with a finger of head with nice lacing and retention.
Smells nice but not overly aromatic. Good hoppiness and stickiness present.
Taste is remarkable. Lots of hop flavor from hop varietals I am not used to tasting. Hard to find descriptors. Zingy and certainly elements of citrus zest on the front end with mellowness and then some bitterness on the finish.
Mouthfeel is chewy and really nice.
Overall this beer is balanced and very well crafted. Distinct NZ hops are quite interesting to this taster used to pacific northwest varietals. Great beer.